The logo of the New Yorker is a dandy with a top-hat with the nickname Eustace Tilley. But Françoise Mouly, the magazine’s art editor, says don’t let that guy fool you – the New Yorker was designed to be a humor magazine when it came out in 1925.

MOULY: “Of course that old fuddy-duddy with his top hat and monocle – that was a joke. He was being mocked. But little by little readers started taking themselves and that image very seriously. As if the attitude of the New Yorker reader was haughty and looking down on the butterflies of this world. Instead, as the New Yorker became a magazine of Pulitzer Prize-winning journalists and ground-breaking fiction, poetry and reporting, it’s even more imperative that it remains a humor magazine and gives voice to artists.”

Mouly grew up in France and was not familiar with the New Yorker. She came to New York to study architecture and married cartoonist Art Spiegelman. In 1980 they founded the comics and graphics magazine Raw. In 1993, editor Tina Brown brought Mouly to the New Yorker.

Some covers stir readers up. Others are serene – like last week’s drawing of a bearded golfer teeing off. Mouly doesn’t assign a specific message but leaves it up to the artists. Sometimes an idea will gestate for months or even years.

“We will only do that topic if we have someone who has something interesting to say.”

URYCKI:  Should a cover have a point or view or is ambiguity OK or even ambivalence? 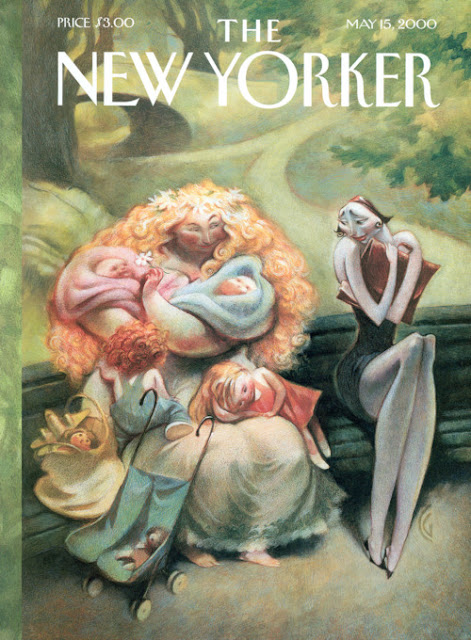 MOULY:  “The cover by definition has a point of view because it’s a signed commentary by an artist. But a commentary is not necessarily of what to do. A few years ago we published an image for Mother’s Day by Carter Goodrich of two women sitting on a park bench. One is a mother earth figure and she has children climbing all over her and a baby at her breast and kids in baby carriages. And next to her is a skinny career woman. She has her briefcase with her; she’s dressed all in black. And they’re looking at each other. We got all these readers’ comments about “How dare you say!” Half of the letters were saying “how dare you say women should have children and not work” and other half says “how dare you say women should work and not have children.”

URYCKI: Your book contains some very funny covers of Sarah Palin that did not run. Can you give me an idea why they were held back?

MOULY: “One part of my job is to solicit artists and to ask them to send to all of their images whether they are publishable or not. And I don't want them thinking “ O my god likes this is just too outrageous because we are looking for ways to explode anything is festering underneath.” Because we are the New Yorker and we deal with very important and serious topics we have a mandate to be funny . And the only way to be funny is to close the door and let it all out, not worry too much about whether this is PC [politically correct] or not PC. 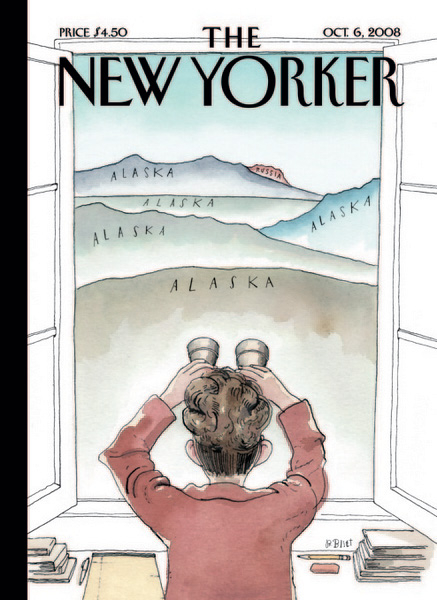 “Same with Sarah Palin. She was such a good character at the time that artists exploded with thoughts and we did publish images such as the one where she's looking out of her window and seeing Russia - especially because the image that was admitted by Barry Blitt actually made a reference to another New Yorker cover by Saul Steinberg of the view from ninth Avenue. “

Mouly says that in a political campaign, artists can be an antidote to the packaged images of politicians that are created by advertising firms.

“We should put at least as much money into paying cartoonists to do cartoons about everything that is said because they have a way of piercing through the package and giving us a truer picture of what we should be looking at.”

Francoise Mouly has established a website – Blown Covers .com – that suggests topics of the week and then asks readers to send in their drawings. Her new book on magazine covers that didn’t quite make it is called “Blown Covers.”

Thanks to Michael Maslin at Inkspill.
Published by Bado at 1:27 AM