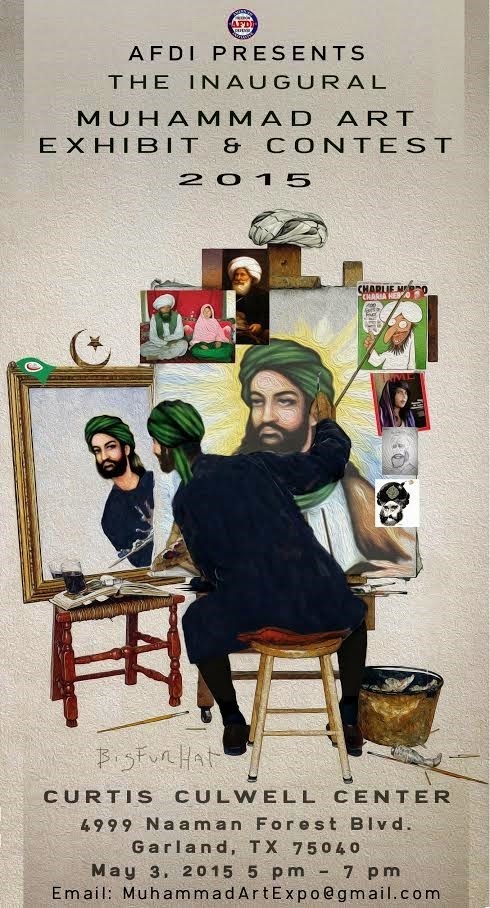 GARLAND, Texas -- Two armed men who opened fire on a security officer outside of a provocative contest for cartoon depictions of the Prophet Muhammad have been killed, authorities in the Dallas suburb of Garland said Sunday night.

The City of Garland said in a statement posted on its Facebook page Sunday night that two men drove up to the Curtis Culwell Center and began shooting at a security officer.

Garland Police Department officers engaged the gunmen, who were both shot and killed, the statement said.

The statement did not say whether the shooting was related to the event. The security officer's injuries were not life-threatening, the city said.

The gunmen's vehicle may contain an "incendiary device," according to the statement. A bomb squad was on the scene, and nearby businesses were evacuated.

The New York-based American Freedom Defence Initiative had been hosting a contest at the centre that would award $10,000 for the best cartoon depicting the Prophet Muhammad.

Such drawings are deemed insulting to many followers of Islam and have sparked violence around the world. According to mainstream Islamic tradition, any physical depiction of the Prophet Muhammad -- even a respectful one -- is considered blasphemous.

Earlier Sunday, about 75 attendees at the contest were escorted by authorities to another room in the conference centre before they were taken to a school bus. Authorities said they would be taken to another location.

Johnny Roby of Oklahoma City, Oklahoma, was attending the conference. He told The Associated Press he was outside the building when he heard around about 20 shots that appeared to be coming from the direction of a car passing by.

He said he heard officers yell that they had the car before he was sent inside the building.

Pamela Geller, president of the AFDI, said that the shooting showed how "needed our event really was."

She told the AP earlier that she planned the Sunday event to make a stand for free speech in response to the outcries and violence over drawings of Muhammad.

In January, 12 people were killed by gunmen in an attack against the Paris office of the satirical newspaper Charlie Hebdo, which had lampooned Islam and other religions and used depictions of Muhammad.

Geller's group is known for mounting a campaign against the building of an Islamic centre blocks from the World Trade Center site and for buying advertising space in cities across the U.S. criticizing Islam.

An author and activist with passionate fans and detractors, Geller has been sounding the alarm about Muslim encroachment into Europe and America and the possible impact on American culture in the future.

The Free Speech Rally Geller organized is one of many activities she has created to shine the light on radical Islam and the teachings of Imam’s in mosques in the United States.

In June, 2010, Geller organized and led a group of approximately 5,000 protesters (Geller released this estimate) to march on the site of the site of the proposed “Ground Zero Mosque.”

Eventually, plans for the mosque were cancelled.

Geller is also listed as an “Extremist” on the left-wing Southern Poverty Law Center’s (SPLC) website.

The SPLC says she is the “anti-Muslim movement’s most visible and flamboyant figurehead. She’s relentlessly shrill and coarse in her broad-based denunciations of Islam.”

The organization also lists AFDI as an anti-Muslim hate group.

Read also:
Texas shooting: What have we learned five years after ‘Draw Muhammad Day’?
'Draw Muhammad' Shooting in Garland: What We Know About Texas Attack
Published by Bado at 11:10 PM