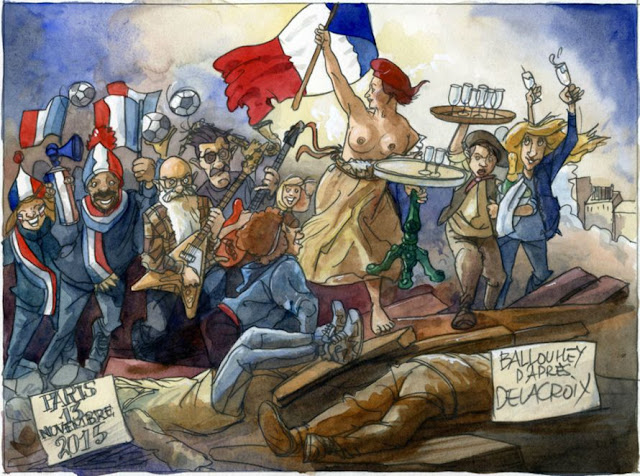 
You have all followed, with great interest or not, the gloomy affair of the Holocaust contest organized by the Teheran House of Cartoons and the inappropriate presence of the president of FECO International among the competitors.

That second “Holocaust Contest” was directly targeting the green Charlie cover “All has been forgiven” and the sorrowful gatherings after the Charlie slaughter.

How can you assault French and Western people when you belong in a revisionist country if not by claiming the Holocaust has ever happened. For us, French and French speaking cartoonists it is unacceptable.

And just to prove their turpitude the Teheran House of Cartoons went even further, giving the prize to Zéon, a close friend of Soral, a well known revisionist writer and polemist..

We asked for explanations from  the board of FECO International and succeeded in having the president resign. Elections were duly set up but it seems that the list of candidates was not submitted to a vote by either Feco-France, Feco-Israel, Feco-España and maybe others.

Those elections were rather odd since the former resigned president happened to become a vice president without having ever been a candidate.

After an unanimous vote at the General Assembly, we agreed to leave FECO International.

We can’t keep the name of FECO because it has probably been registered. After consultation and deliberation, the board chose the name FRANCE-CARTOONS, France for the French speaking side of our association and Cartoons which is the word everybody uses in the world to refer to our job. As a subtitle: French Speaking Press Cartoonists Association.

This association belongs to us all, the French speaking cartoonists, we keep in touch with our foreign colleagues thanks to our old contacts and thanks to the new ones such as the American and Australian cartoonists.

Our new association gets off to a great start. Today we number 106 members. The website will blossom, the webmag will be more and more attractive in order to promote and défend our job, provide advice and help more rapidly.

I am grateful to all the association members for the confidence they showed me at the Saint-Just Assembly. All my thanks too to Rafagé (secretary) and Tym (treasurer) for their efficiency, kindly supervised by their predecessors Rousso and Bertin and vice president Battì.


*FECO: Federation of European Cartoonists Associations.
Published by Bado at 12:00 AM