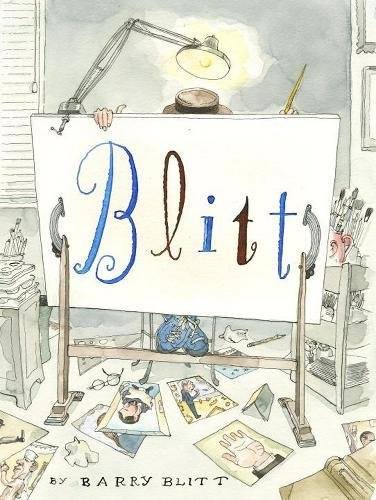 The book contains caricatures of the public figures, mainly entertainers and politicians, who've occupied the limelight from the late 1980s on.

It's got Michael Jackson holding an infant over an apartment-building railing, Vladimir Putin depicted as a figure-skater prancing around the ice, Pope Francis doing snow angels and, of course, Donald Trump, mid-air, coming down for a big, fat bellyflop in the American pool. Named Blitt, the collection also gives the Canadian-born, Connecticut-based artist's jokey visual takes on the big news events and scandals of our times.

On one page are George W. Bush and his cabinet in the Oval Office, dithering about what to do for post-Katrina New Orleans, this while they're up to their nipples in water.

On another, in that same office, are the Obamas bumping fists, him in Muslim garb, her dressed as a freedom fighter – an image that reportedly wasn't popular with the pair then campaigning hard for the presidency.

These illustrations, most of them covers for The New Yorker, have formed part of the American political conversation, a set of wry asides lobbed from the sidelines into an increasingly pitched argument.

His pieces don't speak to a fixed point of view. "I'm probably to the left of centre on most issues," Blitt, 59, writes in the book. "But in my work I'm looking for ridiculousness and hypocrisy wherever I can find them."

On a break from the San Francisco leg of his book tour, Blitt puts his aims even more modestly: "I'm mainly just trying to make myself laugh – and then others, after that. That's what I've always been about."

How did a Jewish kid from the insular Montreal suburb of Côte Saint-Luc end up in the thick of New York's cosmopolitan media scene, published by everyone, the unlikely owner of playwright Arthur Miller's old house?

It's a story that has to be dragged out of Blitt, someone less comfortable with the limelight than his subjects.

On the cover of his book, he's drawn himself at work, all but his running shoes and trademark pork-pie hat hidden behind an easel, and for the book's first line, he's lifted the opening sentence of J.D. Salinger's The Catcher in the Rye, the one where its teenage narrator Holden Caulfield complains about the need to speak of where he was born, "his lousy childhood … all that David Copperfield kind of crap."

When pressed, Blitt coughs it up, in a blurt: "I was the smart, small kid, which may be hard to believe looking at me now." Blitt is still far from tall.

"My grandfather was a women's-blouse manufacturer, a Sunday painter, who worked at recreating Norman Rockwell covers. He would take me to this magical art store in Montreal, Gemst, and he would fuss over me when he saw I could draw."

With sketches lampooning his teachers, Blitt got his first of those laughs he values from his friends.

From a family of rabid hockey and baseball fans ("except for my poor mother"), he made his first sale in his teens to the Philadelphia Flyers, drawing their players for their yearbook ("All of them for $125.")

His portfolio got him into art school, first at Concordia in Montreal – "it was exotic, compared to my sheltered upbringing, people ate asparagus there" – and then at Toronto's Ontario College of Art (as it then was).

After graduating, he worked in advertising, at the Toronto and London offices of Leo Burnett. "What I learned there was that I didn't belong in advertising. I did up a storyboard for an ad campaign and the comment was, 'That's good, but make the lettuce look more crispy.' "

He did some drawings for Toronto publications. "I showed people my realistic work and my funnier stuff, and it was always the funny stuff they wanted" – before joining his then-wife, the art director and graphic designer Teresa Fernandes, in a move to New York.

"She was taking a job at Sports Illustrated, and I again took my work around."

He doesn't remember one big break, just a succession of small ones. He started by doing spot work for Sports Illustrated and Entertainment Weekly, then landed a regular gig for the latter doing a celebrity-focused comic strip.

This led to some caricatures of assorted glitterati for Vanity Fair. "My work about the Pop Industrial Complex started to bleed into my work about politics, as politics and entertainment got harder to separate."

It was during this cusp period – his move from drawing entertainment to political figures – that he met The New Yorker's art editor, a French expat named Françoise Mouly, who at once took to him.

"He was laugh-out-loud funny, as well as his talent. A Canadian who has taught me so much about American culture," she says.

With a green light from former editor Tina Brown, she gave him his first cover at the magazine, an illustration of people smoking on the ledges of various skyscrapers, a whimsical response to a new set of smoking bylaws.

He has since done 110 covers for the venerable weekly, the artist who has fronted more of current editor David Remnick's magazines than any other. "I have an agreement with Barry," Mouly says, "That he will send me his work, that he won't edit out the gross, the vulgar, the outré, the unpublishable."

Remnick describes the typical process: "There is a political moment, and [we] will prod Barry and see if he has any ideas. He goes to work, thinking, sketching and, eventually, usually within just a few hours, he starts sending roughs – sketches of ideas, often a dozen or more."

Blitt has a studio attached to the home he shares in Roxbury, Conn., with his second wife, Angie Silverstein – the house that Miller and Marilyn Monroe once occupied.

"There's a legend that he banged some nails into the shed out back," Blitt says, "and, inspired, came back in and wrote the first act of Death of a Salesman. I haven't tried that, to get inspired."

Often, he doesn't have the time to hammer in nails, courting inspiration. "The Brexit cover [of a John Cleese type, silly-walking off a cliff], that had to be turned around in an hour and a half."

Blitt doesn't claim that any great political sophistication aids him in his task: "My comprehension of politics remains superficial."

That said, he was one of the few in his circle to listen to Rush Limbaugh's radio show in its early years. "A lot of my fellow cartoonists don't even go to the Drudge Report. You have to know what the other part of the country is thinking."

Departing Vanity Fair editor Graydon Carter, another Canadian expat in New York, says Blitt's being a Canadian hasn't hurt his work. "It always helps to have an outsider's perspective."

Mouly says Blitt's got a knack for channelling social anxieties. "The Obama fist-bumping cover – there were these people saying outrageous things, that he'd been born in Kenya, that they were really radical. He captured that worry, took it to extremes, in the drawing."

Is Blitt finding it harder, in the Age of Trump, to find the sweet spot for satire in an increasingly serious-seeming time? "Part of my template has been: Wouldn't it be funny if the President were to do this? With Trump, it's not funny because he woulddo that. You can't out-ridiculous him."

Still, he keeps managing to satisfy The New Yorker's editor. "Barry seizes on the outrages and absurdities in our degraded political life and sets fire to them," Remnick says. "He is the greatest political cartoonist alive. He's always thrilling me. He rarely, if ever, thrills himself."

That verdict about Blitt rings true. Mouly once asked him how he felt about all the sketches and drawings she chose to reject. "Are you kidding?" he replied. "There's nothing more painful than having a cover run – that's when you have to live with all the imperfections."
Published by Bado at 12:00 AM