When it came to Canada’s prime ministers, Bruce MacKinnon decided he had to catch ’em all.

MacKinnon, the award-winning editorial cartoonist for The Chronicle Herald since 1985, had a bit of a head start assembling his collection of likenesses of the nation’s leaders, but he was understandably light on works depicting Sir Mackenzie Bowell and R.B. Bennett.

After putting in extra work, the exhibition Prime Suspects: Canada’s Prime Ministers in Caricature is hanging at the Art Gallery of Nova Scotia in Halifax through April 1.

“They had a bunch of my cartoons from a donation made way back when I started with the Herald … so (the gallery) had a couple of current prime ministers at the time,” MacKinnon said during a phone interview.

“I mentioned I had been working toward a series of all Canada’s prime ministers. I wanted the complete set.” 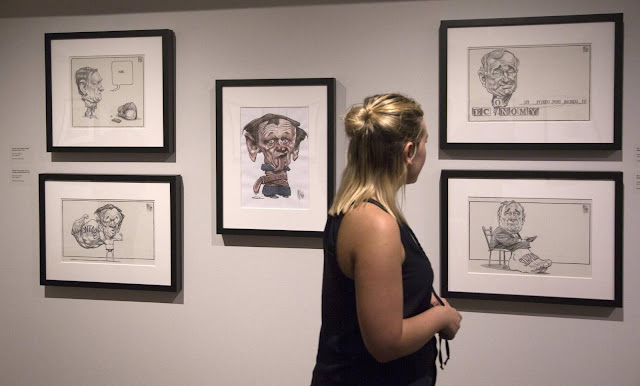 MacKinnon said he had to do the balance of the leaders over the last year while continuing to do his regular work for the editorial page.

“I realized pretty quickly it was a long-term goal and was one I might never have finished because it takes a little resolve when you’re working throughout the week and you’re going to spend your weekend doing more work.

I ended up doing a lot of them in the faster sort of pen and ink, watercolour style, but I did a few paintings.

Diefenbaker was acrylic on board. Sir John A. is a big acrylic canvas. I tried some different styles and different media.”

There are 35 pieces in the exhibition, but even mediocre students of history may know that there have been only 23 prime ministers.

“From Mulroney onward, we include multiple images of those prime ministers to mirror Bruce’s time at the Herald,” said David Diviney, curator of modern and contemporary art at the gallery, in a phone interview. 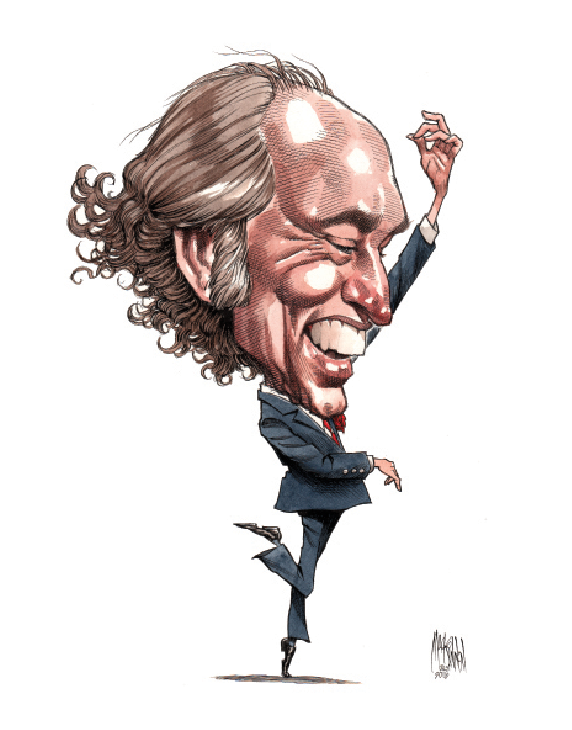 “Those that pre-date Mulroney obviously are more retrospective in scope, where Bruce is going back, revisiting documentation and creating works from that source material.”

MacKinnon said the idea of each caricature of an early prime minister was to say something about their career and acknowledge their legacy, which is not a style conducive to the deadlines of his day job.

“Individual editorial cartoons over a career can be very issue-specific, so what we ended up doing from Mulroney on was including three for each prime minister,” he said.

“I love caricature; it is my favourite part of the job. I just love drawing faces and trying to get to the essence of what somebody looks like. … But I needed to get down to their whole history and decide sort of what they’re defined by.” 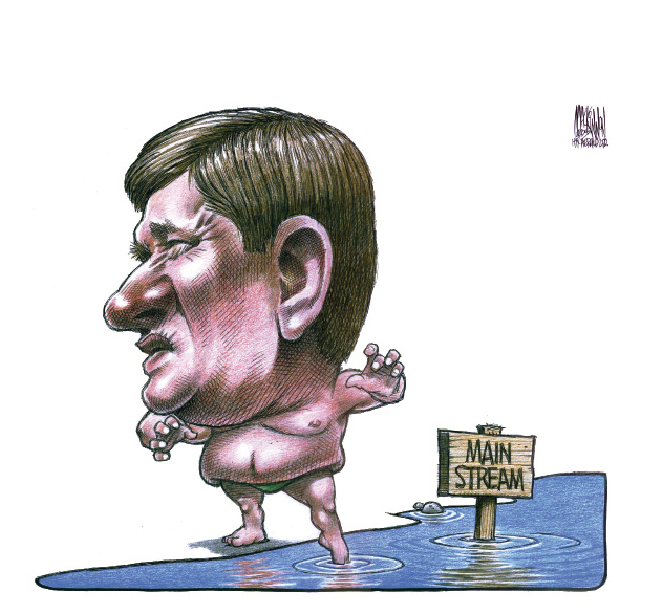 MacKinnon said he did a lot of reading for the project, and he used some of his research to compile blurbs that accompany the pieces and explain the angle of a cartoon.

“It was a bit time-consuming, but it was nice to distill what I’ve read of the various prime ministers and shed a little light on the cartoons I’ve done.”

For instance, Sir John Abbot, prime minister for about 17 months in 1891 and 1892, is shown shackled to a ball and chain labeled “PM.”

“He was a reluctant prime minister,” MacKinnon said.

“He was basically appointed after the death in office of Sir John A. and didn’t particularly like the machinations of government and wasn’t really into being prime minister. So I drew him with a scowl on his face.”

Diviney said MacKinnon’s work is a natural fit for a feature exhibition at the gallery, especially given the timing of Canada 150 commemorations. 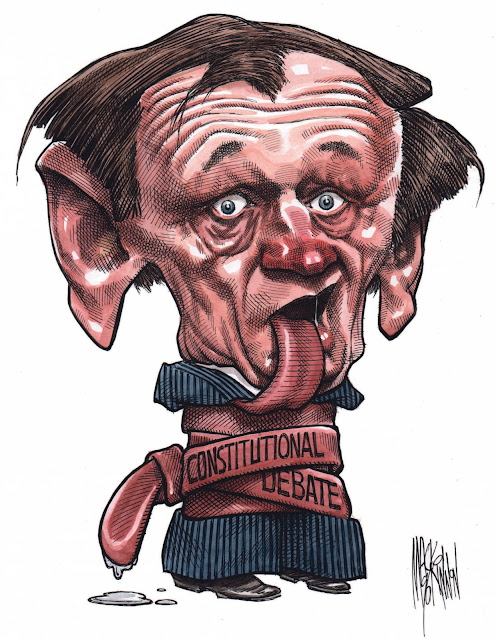 “Bruce is an artist that’s in the permanent collection of the Art Gallery of Nova Scotia,” he said.

“It just seemed like with 2017 coming up, this provided a platform that was too good to pass up. We entered into a conversation with Bruce and invited him to premiere this suite of works here.”

Diviney described the title of the exhibition as appropriately punny since the show isn’t intended to be an outright celebration of Canada’s history.

“I see it as a playful yet critical commentary of the past 150 years within an examination of the sometimes dubious nature of politics and the people who’ve been involved.”

“It’s a genre that extends back some time. It certainly has a place in terms of contemporary conversations in the public sphere and within the art world, as well.”

You can see a few more Prime Ministers by MacKinnon here.
Published by Bado at 12:00 AM