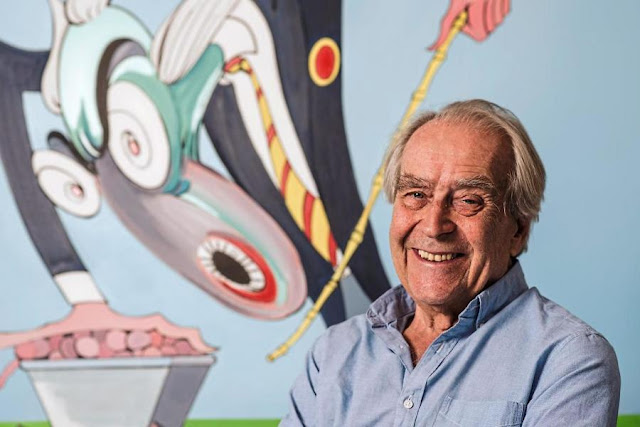 As legendary cartoonist Gerald Scarfe joins the Evening Standard this week, he tells Nick Curtis about the biting art of satire, working with Pink Floyd and why the ‘misuse of power’ drives him.

“Tread on the Ku Klux Klan,” says Gerald Scarfe, as I step gingerly over what he calls his “filing system”.

Computer-printed pictures of politicians, rioters and racists strew the fifth-floor studio atop his Chelsea townhouse where Britain’s best-known cartoonist works pretty much all day, every day.

The walls are crammed too, with mementos of a career spanning more than seven decades and several artistic incarnations: savage political caricatures, his designs for Pink Floyd’s The Wall and Disney’s Hercules, a Bafta award.

On one side, six fresh, sharp, brilliantly brutal drawings show a porcine Donald Trump talking (literally) out of his anus, riding with the Horsemen of the Apocalypse or waving a missile in place of his genitals.

Scarfe, a dapper and sprightly 81, left The Sunday Times in June after 50 years and this week joins the Evening Standard to contribute a new Friday illustration, Scarfe’s Week, to complement the daily political cartoon by Adams on the comment pages.

“I am a compulsive worker,” he says, folding himself into an Eames armchair bought by his wife, the actress Jane Asher.

“Drawing is what I have done all my life since I was a child: it’s my way of getting my rocks off or my anxieties out. It’s been nice drawing for myself for a couple of months and I can publish these [Trump drawings] later in a book but a newspaper deadline can produce things that otherwise wouldn’t exist — it’s that last bit of energy that’s squeezed out of the toothpaste tube.”

He is a fan of Adams’s work. “I admire his line and I admire his ability to get up at 6am and come up with a drawing in two hours. A daily cartoon is a very hard job to do.”

We seem to be in a golden age of illustration, akin to the revolution of the Sixties when Scarfe and his sometime friend, Ralph Steadman, shook up the staid cartooning world of Giles, Trog and Vicky.

“It’s such a weird job to do because you are part artist and part journalist,” Scarfe muses. “But most editors realise it is a big asset to a newspaper, to have a visual joke that takes the piss out of the high and mighty. I think the cartoonist’s job is to give the man in the street a broad-sweep, black-and-white picture of things, as simple as possible.”
​
Scarfe first began submitting drawings to the Standard and others in the late Fifties in a bid to escape his job in his uncle’s commercial art studio at the Elephant and Castle.

But it wasn’t until Private Eye launched in 1961 that he settled (if that’s the word) into the elegantly grotesque, ferocious style that remains instantly recognisable: the swooping line that turns a nose into a stabbing beak, the deft shading that unmasks a dead-eyed dictator as a cannibal feasting on his people. 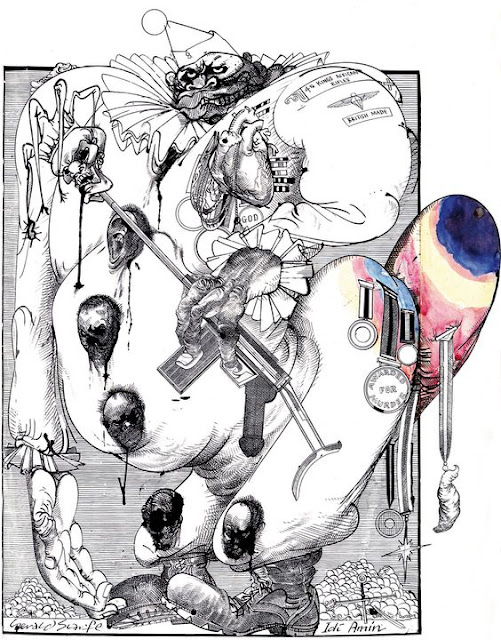 These days he is in the studio by 7am, often earlier: he listens to Radio 4’s Today programme, reads three newspapers, and often works into the evening, when he’ll watch one major news bulletin and Newsnight.

Although he has his own website, he is a stranger to social media. “I am not computer-literate.”

He draws every day, whether he has a commission or not.

Is it a rage that drives him?

“Yeah, over the misuse of power. But that doesn’t mean I walk around in a terrible fury every day. If I feel angry about Blair and Bush I can just draw it and get it out of my system. Until the next day.”

He was born in 1936 in St John’s Wood, his father a banker and his mother a teacher, and was an only child until he was nine, when his brother was born.

“I was a timid, frightened child,” he recalls. “It was wartime so I was aware my parents were anxious, and my father was away most of the time anyway in the RAF. I was a chronic asthmatic and during my childhood my parents truly thought I was going to die.

There were nights I could not get my breath, I’d be heaving and gasping all night, waiting for dawn and the blackbird in our garden to start singing, because when he arrived at five in the morning we were on our way to the day, which was more tolerable.”

He missed out on most of his schooling and would instead lie in bed, sketching and making plasticine models.

In 1952 he won a competition in the Eagle comic to draw an Ingersol watch, beating into second place a certain “D Hockney of Bradford”.

But even from an early age the overall tone of Scarfe’s work was dark, which he thinks may be a result of his lonely, limited upbringing, or possibly of the medicines he was given: “I did take ephedrine and various heightening drugs that made you feel really high and electric.”

His father wanted him to go into banking but his lack of schooling proved a bar, so he started drawing commercial products for his uncle aged 16.

In his free hours he taught himself German, educated himself about Greek and archaic art, and realised the gulf between his employment and his ambitions: “Commercial art is telling lies, and the point of being an artist is that you tell the truth.

Luckily for me, Private Eye started soon after, where I was encouraged by [founders] Peter Cook, Richard Ingrams and Willie Rushton to tell a kind of ultra-truth.”

Private Eye made him a star: he was likened to Hogarth, Bosch and Brueghel for work that often had sexual overtones and was always vicious.

It got him work on newspapers, and it would also publish work they wouldn’t.

The Times commissioned but rejected his honest and stunning sketch of a senile, decrepit Winston Churchill on his last day in the Commons: Peter Cook put it on the cover.

Soon, Scarfe was subject to a bidding war between the Daily Express and the Daily Mail, which the latter won by upping their offer from £3,000 a year and a Rover to £5,000 and an E-Type Jaguar.

“I thought, oh, this is how it goes in Fleet Street,” he recalls. “I’ve never been given a car since.”

The Mail sent him to Vietnam, where he saw the horror of college boys forced to fight for reasons they didn’t understand, and was sickened by mutilated bodies in a mortuary. 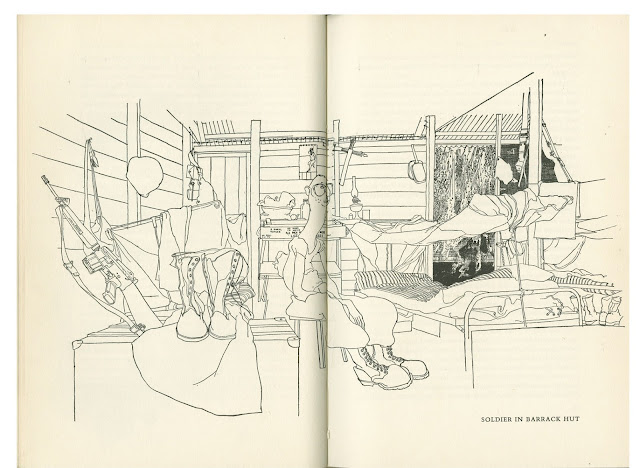 The Sunday Times, which he joined in 1967, sent him to the Six-Day War and to Northern Ireland, where the IRA hijacked his rental car at gunpoint.

He bought his magnificent home, a stone’s throw from those owned by various Rolling Stones, in the mid-Sixties. 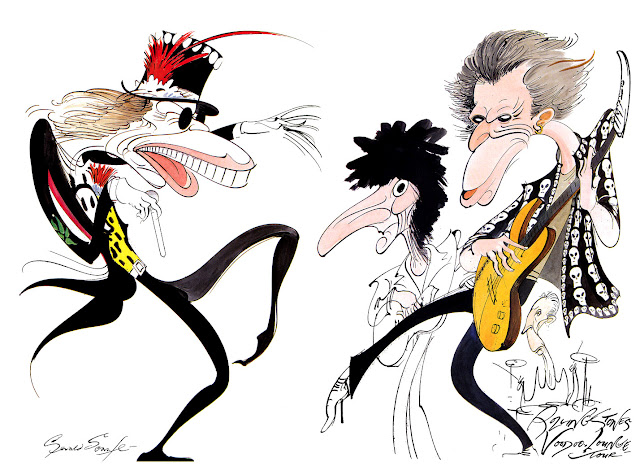 “And I couldn’t afford my house now.”

He met actress Jane Asher in 1971, on the valedictory trip of the Brighton Belle train to celebrate the 10th anniversary of Private Eye, in which she has shares.

They married in 1981 and have three children: Rory, a publisher; Alexander, an artist, and Katie, an actress.

His collaboration with Pink Floyd began in 1974 on the album Wish You Were Here, after Roger Waters and Nick Mason both independently saw a BBC documentary he had made called A Long Drawn Out Trip.

“They rang each other and said, ‘We’ve got to work with that guy, he’s f***ing mad’,” Scarfe recalls.

He and Waters went on to create the imagery of the album, concert tour sets and the 1982 film of The Wall — the looming authority figures, fascistic marching hammers, and mournful gas-masked children.

“Roger and I have the same sardonic, sarcastic attitude to the world,” he says.

“We played a lot of snooker and drank a lot of Special Brew.”

On Hercules, he was treated like a superstar, but fought and lost a war against cuteness with the team of animators Disney gave him.

For all the ferocity of his work and his starry connections, Scarfe lives a quiet life.

“Jane has been in An American in Paris for six months so my evenings have been solitary,” he says.

“So either I buy some fish and roast it, or see friends for dinner, or go to the cinema.

When we are together we go to the theatre and do normal things, but we are fairly private: we don’t put ourselves about much.”

In 2008 he was made a CBE and in 2011 a fossil pterosaur was named after him, because the geologist who discovered it thought it looked like his caricature of Margaret Thatcher. 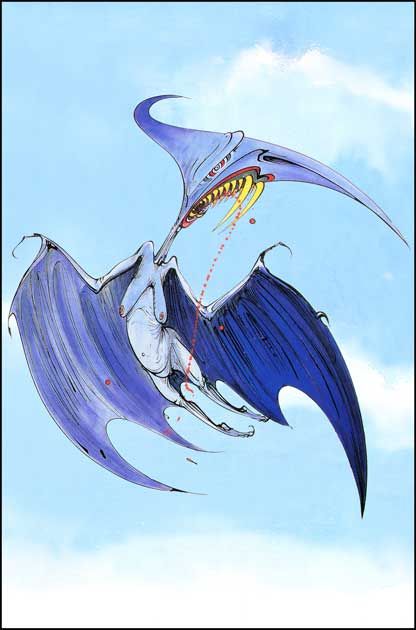 A model of it stands in his studio, alongside a horse’s head from the Parthenon, and a photograph of David Cameron and David Davis smilingly holding up a cartoon of themselves stabbing each other in the back.

This makes me wonder what effect Scarfe thinks cartoons have.

“Bugger all!” he booms. “Politicians would rather be drawn as slavering warthogs than not be noticed at all. Although if you are doing a daily cartoon like our friend [Adams] it can build up and you can have an effect.”

But cartoonists draws for the readers, not the leaders.

“I hope for that moment someone says, ‘That encapsulates exactly what I bloody well feel’,” he says with a smile.

“Though half the time they’re probably saying, ‘Who’s that supposed to be?’”