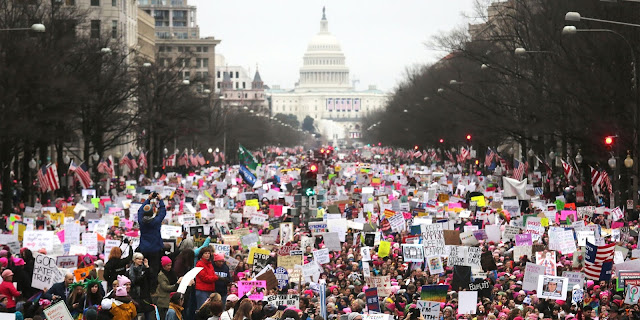 The National Archives acknowledged this week that it altered a photograph of the Women's March, which took place the day after President Trump's inauguration in 2017, to blur some signs held by marchers that were critical of the president.

Among the alterations are the blotting out of the word "Trump" in a placard that reads "God Hates Trump" and the blurring of the same word in another sign that reads "Trump & GOP - Hands Off Women." Words on other signs referencing female anatomy were also altered.

The Archives said the decision to obscure certain words was made as an exhibit featuring the march was being developed. It said the archivist, David Ferriero, who was appointed by former President Obama in 2009 and who was involved in the talks, supported the decision.

"As a non-partisan, non-political federal agency, we blurred references to the President's name on some posters, so as not to engage in current political controversy," Archives spokeswoman Miriam Kleiman said in a statement to The Washington Post.

"Our mission is to safeguard and provide access to the nation's most important federal records, and our exhibits are one way in which we connect the American people to those records. Modifying the image was an attempt on our part to keep the focus on the records," Kleiman added.

Kleiman went on to note that the Archives welcomes groups of students and young people who could view the words as inappropriate.

The Archives "only alters images in exhibits when they are used as graphic design components," she said.

"We do not alter images or documents that are displayed as artifacts in exhibitions," Kleiman added. "In this case, the image is part of a promotional display, not an artifact."

Historians interviewed by the Post expressed disappointment with the decision, saying it was misleading.

"There's no reason for the National Archives to ever digitally alter a historic photograph," Rice University historian Douglas Brinkley said. "If they don't want to use a specific image, then don't use it. But to confuse the public is reprehensible.

The head of the Archives has to very quickly fix this damage. A lot of history is messy, and there's zero reason why the Archives can't be upfront about a photo from a women's march."

"The National Archives used to stand for independence. That mission has been compromised." in The Washington Post.
Published by Bado at 12:00 AM