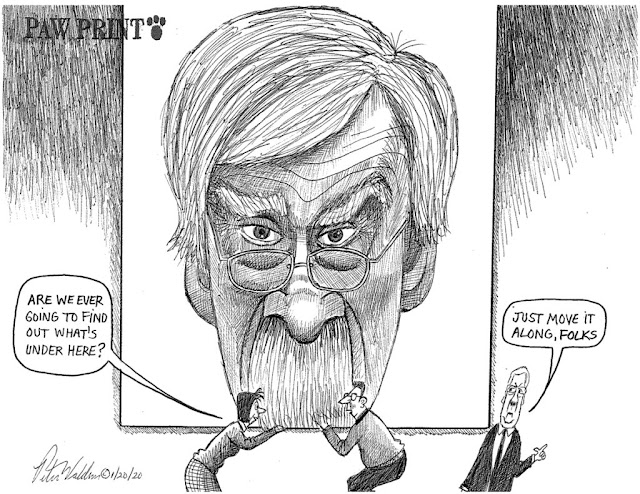 Peter Waldner usually keeps a sketch pad within arm’s reach: in his car, on a bedside table, for whenever inspiration strikes.

“I’m still old school,” he explained during a recent interview at his Worthy Way studio. “In the middle of the night, I’d jot ideas down and the next morning I’d read it and have no idea why I thought that was funny.”

For nearly 27 years, Mr. Waldner has been creating the weekly editorial cartoon for the Reporter and other East End newspapers.

Often working with a sheet of paper and ballpoint pen, he strings together quirky takes on everything from the absurdity of Washington politics to hyperlocal hot-button issues — deer, ticks, tourists — that have earned him many awards from the New York Press Association.

“Politically, there’s almost too much,” the 64-year-old laments. “Sometimes you’re just so sick of the news, that your cartoon reflects that.”

Regardless of topic, Mr. Waldner has always sought to make his cartoons relatable. “I’ve always looked at the characters in my cartoons as just us. Imperfect, with bald heads and big bellies and grey hair and saggy jowls.”

The downside of that, though, is that people mistake the characters for him and his wife, Sandra. “I have to be careful with that,” he said, cracking a smile. “She doesn’t laugh [at my cartoons] anymore. She knows the punchline before it comes.”

Mr. Waldner’s had a pencil in his hand for most of his life, growing up in Glen Ridge, N.J. and creating cartoons for his high school newspaper, before earning an art degree from Elmira College.

He was introduced to Shelter Island as a child and had been working as a commercial artist in New York City when a couple on the Island asked if he wanted to paint their house. 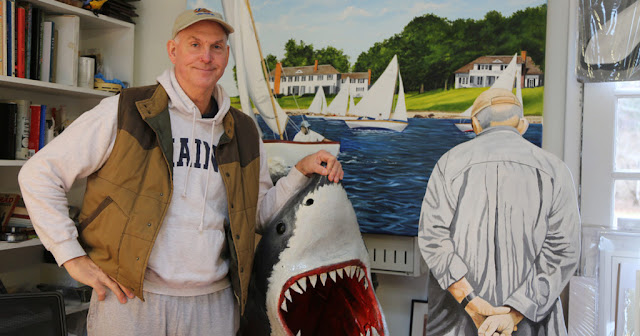 Shelter Island also serves as a muse for his fine art; pastel and colored-pencil drawings, 3D acrylic paintings and life-sized papier mache installations that make their way around the Island each summer.

Mr. Waldner also organizes the annual ArtSI artists studio tour, curates the gallery at the library and creates set pieces for local theater productions, including the school musical every spring.

Before creating the “Paw Print” cartoon locally, Mr. Waldner ran a nationally syndicated daily cartoon called “Flight Deck.” It ran for 12 years and appeared in hundreds of newspapers, including the Los Angeles Times and the New York Daily News.

“That used to be more difficult,” he said about working on deadlines three months ahead to keep up. “You couldn’t do anything timely or anything in the news,” he said.

“You could do holidays and things like that. It was a good way to practice having to write and constantly come up with ideas. And that doesn’t include all the ones you don’t submit.”

In those days, the cartoonist mostly came up with slightly off-beat observations on the mundane.

One evening, he couldn’t think of a thing until, watching TV, “Wheel of Fortune” came on and he thought to himself — Vanna White still looks the same. Bingo, an idea for a cartoon featuring a middle-aged guy sitting on the couch.

The show’s producer saw the cartoon and asked for a signed color copy. A few months later, Mr. Waldner watched from his living room as Pat Sajak held the cartoon on the show.

“That all came about on a night when I couldn’t think of anything,” he said.

Writing the captions or speech balloons for each cartoon proves to be the most challenging part. “You want to get to the point,” he said. “People have very low attention spans … if there’s not a payoff, people are annoyed.”

These days, for the weeklies, the deadline pressures are rare. Mr. Waldner usually churns them out on Sunday afternoons, offering him a chance to reflect on the week.

He wasn’t kidding about being old school, by the way. Until the Reporter offices relocated to Mattituck in 2019, Mr. Waldner handed his cartoon in — always on deadline — at the office on North Ferry Road. Now, he sends an e-mail.

To see more of his work online, find him on Instagram @peterawaldner.