A cartoon published in Wednesday’s edition of l’Acadie Nouvelle, an independent French-language newspaper in New Brunswick, is causing a social media outcry.

Marcel Boudreau’s cartoon depicts a caveman dragging a woman juxtaposed with the image of a man wearing a turban carrying a gun, who is using a leash to drag a woman wearing a burqa.
Moncton-based activist Hafsah Mohammad said the cartoon “turns Muslim women into an object and degrades them.”

The cartoon was quickly removed from the paper’s website, but can still be found in the digital and print editions of Wednesday’s paper. 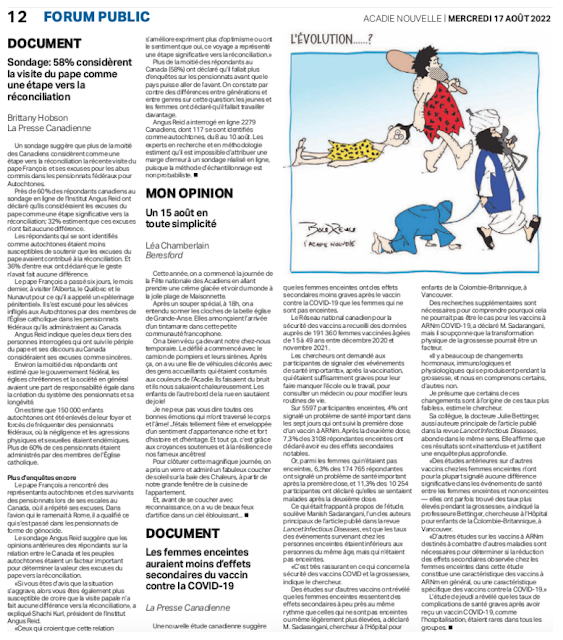 Moncton’s Inda Intiar was shocked when she first saw the cartoon.

“I was worried about the real impact on people like my family, not just here but across Canada. We know that there’s increased hate crimes. I looked at Statistic Canada’s report on that.
Islamophobia is big. Gender-based violence is happening to a lot of women and people of minority genders around the world,” she said in an interview on Friday.
She wrote a letter to the editorial team on Thursday outlining her concerns, saying she “finds it incredibly disappointing that neither the cartoonist nor the people who approved its publication saw the problems with it.”

She asked her friend Olivier Hussein, a Black and Muslim activist originally from Moncton, to translate the letter to French.

Hussein also finds the cartoon offensive and says he believes the cartoonist “owes the Moncton Muslim community an apology.”

“I know there’s freedom of press but for some things, you have to be respectful,” he said in an interview on Friday.
In response, Francis Sonier, the editor and managing director of the paper told Global News in French: “The cartoon was a comment on the behaviour of the Taliban in a specific part of the world, Afghanistan. Nothing else.”

Intiar doesn’t believe that context was immediately apparent in the cartoon.

“I think it’s lacking context. In addition, there are multiple ways to critique that kind of regime. Obviously they’re doing horrible stuff, but I think there’s more productive ways to critique regimes or ideologies without perpetuating harmful stereotypes that could harm real people,” she said.

She said l’Acadie Nouvelle’s editorial team has accepted her invitation to an in-person meeting with her, her partner and Hussein, to discuss the publication of the cartoon and the issues surrounding it.

“It’s hard to be a woman who grew up in a Muslim family to feel that sense of belonging when one of the regional papers that is very trusted publish things like that, so I want to know that the impact of this is considered.” Intiar said.

Global News made attempts to contact the cartoonist, Marcel Boudreau, but he was unavailable for comment.
Published by Bado at 9:31 AM