Bert Archer from The Montreal Gazette. 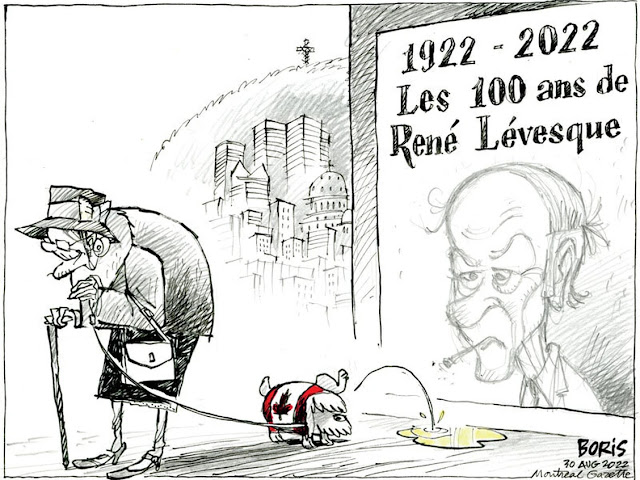 There has been a good deal of outrage over the most recent Boris cartoon published online Monday afternoon and in print Tuesday morning.
It depicted an elderly lady in Montreal not paying attention while her small dog pissed in the direction of a poster commemorating René Lévesque’s centenary.
Just after 9 a.m., Parti Québécois Leader Paul St-Pierre Plamondon tweeted it out, calling it disrespectful.
There followed a twitterstorm that soon spilled over into the press, and my inbox.
We allow our columnists and cartoonists ample latitude to express themselves and their opinions, which can lead to a lot of other opinions.
I wouldn’t usually step in to explain or defend a cartoon or column. Their authors are employed to voice their opinions, not ours, and the two don’t always intersect.

But this cartoon has deeply upset some readers, so I’d like to explain what I saw when I was sent this cartoon yesterday afternoon.

I saw in the foreground a woman drawn without sympathy — no visible eyes, the signs of age exaggerated and made to look ugly — who is oblivious to everything, including her dog, which is urinating in the direction of a poster in the background with a sensitively, even reverently drawn René Lévesque.
I took the woman as being the subject of the cartoon, not Lévesque.
Whether she represents a stereotype of a certain breed of intransigent anglo, or simply a generation that mostly doesn’t exist in Montreal anymore, a generation that’s aged out in one way or another, I took it to be her and her careless ignorance that is the butt of the satire, not the former premier.

This was a strong cartoon, for me, precisely because of the starkness of the central image.
It is an outrage to piss on the memory of one of Québec’s greatest political figures, who fought for a vision of this province that many came to share in one way or another.

The Montreal Gazette serves, and is put out all day every day by, people who love this city and this province.
Our staff, like Montreal, consists of, among many others, anglos who did not move away, or who have come back or moved here, precisely because of the legacy Lévesque and others like him have left.

Though reading the many emails from readers and others today has not been fun, it has in its own way been uplifting.
The writers appear to be people from all manner of cultural and linguistic background, all of whom, in the course of expressing their outrage at my bad taste or judgment for running the cartoon in the first place, evince a deep respect for Lévesque and are a reflection of a Quebec I have to think Lévesque would have loved to see, a Quebec that’s moved beyond crude dichotomies, and one we are very proud to be a part of.
Published by Bado at 6:01 AM