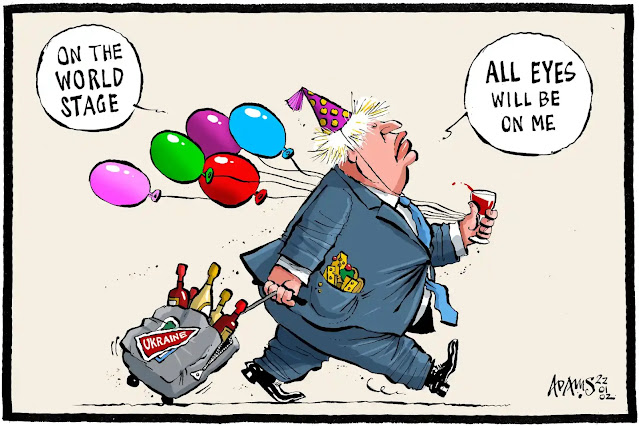 He’s been a punk, a toddler, a narcissistic sociopath… Christian Adams revisits his most memorable sketch of the outgoing PM, and reveals what lies in store for his successor.

This was inspired by the first time Johnson took off for Ukraine – little did I realise at the time that it would become a running theme. He wanted us all to think he was a man of the world, but we could all see he wasn’t, really.

I like some of the little details in it: the pocket bulging with cheese; the way he looks like a toddler in his party hat, trailing those balloons… because he is a toddler, isn’t he? A toddler dressed up as a grown man.

I’ve been drawing Boris for many years, dating back to his tenure as mayor of London. He’s always had big lips and floppy blond hair, but over the years the lips have got bigger and the hair messier. He’s got fatter, too.

When you see him at PMQs it is the eyes you notice. He has very dark, sad eyes – he doesn’t look like a happy man. It’s important to show that, as it’s the bit he wouldn’t want you to see, unlike the hair, which is his trademark.

There’s no denying that Boris has been a daily gift to cartoonists.

Liz Truss I’m still finding very difficult to draw, as I haven’t had much practice.

I’ve got Sunak down now: he has big ears, like Mr Potato Head, a big nose and big white teeth.

Truss is more indistinct; kind of greasy and shiny, like a mannequin.