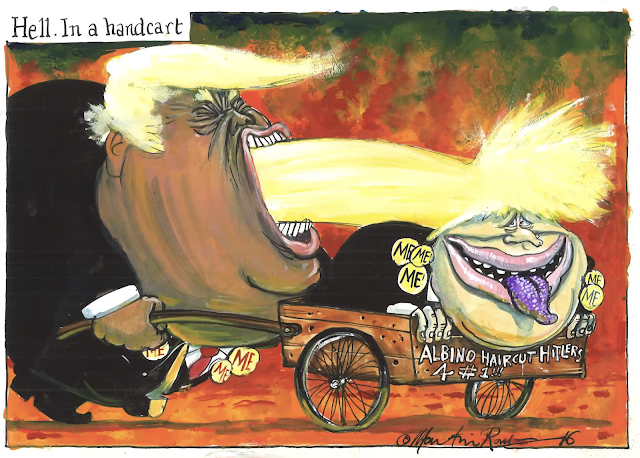 He’s been a punk, a toddler, a narcissistic sociopath… Martin Rowson revisits his most memorable sketch of the outgoing PM, and reveals what lies in store for his successor.

I did this for Tribune magazine in March 2016, when Trump was first emerging as a presidential candidate and Boris was mayor of London. I realised that they were two cheeks of the same arse.

Populist isn’t the right word; they are both clearly narcissistic sociopaths and attention vampires. The only difference is that Trump doesn’t care what people think of him, whereas Boris wants to be liked.

Generally as a cartoonist you think about your subject having three key elements: with Blair it was the teeth, the eyes and the ears.

Everyone thinks it’s the hair with Boris, but I realised early on that was not the case: it’s the eyes. His eyes are very interesting: close-set and triangular. When he’s lying he always moves his eyes to the left. When things are going badly for him, he looks awful – the eye bags, the grey, flabby skin.

I’d been hoping for Mordaunt to win the leadership race, because she’s fresh meat. I’ve only drawn her two or three times.

With Sunak, the benefit is that he’s so tiny, like a little elf.

Sometimes cartoonists develop Stockholm syndrome: we fall in love a little bit with our subjects, because they are so fun to draw.

I still miss George Osborne. But Tony Blair was my all-time favourite because his appearance degenerated so much while he was in office, and I was able to track that in real time.