Aislin cartoon at heart of discrimination lawsuit in the U.S. 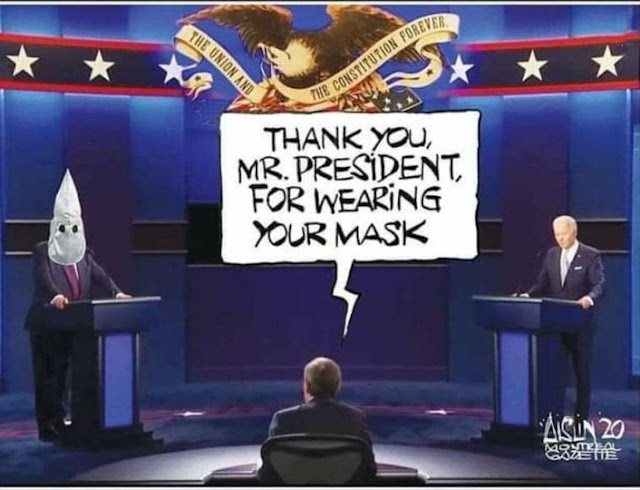 A former Delta Air Lines flight attendant is filing an employment discrimination lawsuit, saying she was fired for posting an editorial cartoon on her personal Facebook page by Montreal Gazette political cartoonist Aislin that depicted then-president Donald Trump wearing a Ku Klux Klan hood, CNN reported Saturday.
The image includes a quote ballon over the head of the debate moderator that said: “Thank you, Mr. President, for wearing your mask.”

In the lawsuit filed Aug. 8 in federal district court in Atlanta, Leondra Taylor, who is Black, said she posted the image of Trump and then-former vice-president Joe Biden during the first presidential debate, held Sept. 29, 2020.
It was published online that evening and Oct. 1 in the print edition of the Montreal Gazette.

On Sunday, Terry Mosher — the political cartoonist giant goes by the name Aislin in his editorial work — provided context for the image as he described coming up with the idea while watching the debate.

“Masks were so much in the news then because of COVID — and the idea just came to me,” Mosher said.
Trump, asked by debate moderator Chris Wallace to denounce white supremacist groups and their role in violence, declined to do so, at one point telling the neo-fascist group Proud Boys to “stand back and stand by.”

Recalled Mosher: “I took a photograph of the actual debate. I created a Ku Klux Klan mask, dropped it on top of Trump’s head and then dropped in the balloon with the wording.

He referred to the image as a phototoon. “They are very popular — and they adapt so well to online. I do it quite a bit, manipulate the photo and have fun with it,” he said.

Within 24 hours, the image “had 2 million views and had gone around the world. I stopped counting after that,” he said.

“It is the most popular cartoon I have ever created on the internet.”

Since the story of Taylor’s lawsuit broke on Saturday, Mosher said he has heard from friends the image is once again being widely posted online. “I guess you can’t keep a good cartoon down,” he said.

“But it has a serious side: Does this mean that companies can tell you what you can and can’t post on your Facebook page?
This woman has my full support because I don’t think any company has the right to monitor your own personal communication tools, whether it’s Facebook or Twitter,” he said.

Mosher acknowledged, like most of us, he does not know the full back story to Taylor’s dismissal. But if she was, in fact, fired for posting the image on her Facebook page, he said, “then it is a dangerous precedent.”
According to CNN, the lawsuit states that, during a review of Taylor’s Facebook page sparked by another employee, Delta “came across some political posts that it deemed to be in violation of its social media policy.”

According to the lawsuit, a group of Delta employees told Taylor in January 2021 her posts were unacceptable and they did not “tolerate, disrespectful, hateful or discriminatory posts.”

A month later, according to the lawsuit, Delta notified Taylor it intended to “suspend her employment” and a Delta manager said her “political posts were racially motivated” and that’s the reason for her termination.

Taylor is suing for general damages for mental and emotional suffering, punitive damages and lost salary.

Her lawsuit alleges Delta discriminated against Taylor and contends her posts were “political statements, but they were not hateful or discriminatory.”
It also argues non-Black Delta employees weren’t subject to the same penalties for social media posts.

A Delta spokesperson responded to CNN in a statement about Taylor’s lawsuit: “When Delta employees intermix Delta’s brand with conduct or content that does not reflect our values of professionalism, inclusion, and respect, that conduct can result in discipline or termination.

“While personnel issues are considered private between Delta and its employees, the circumstances described by our former employee are not an accurate or complete explanation of the company’s termination decision.”

Mosher, for his part, quipped: “I’d like to thank Delta for giving a very good cartoon of mine a second life.”

sschwartz@postmedia.com
Published by Bado at 1:11 PM