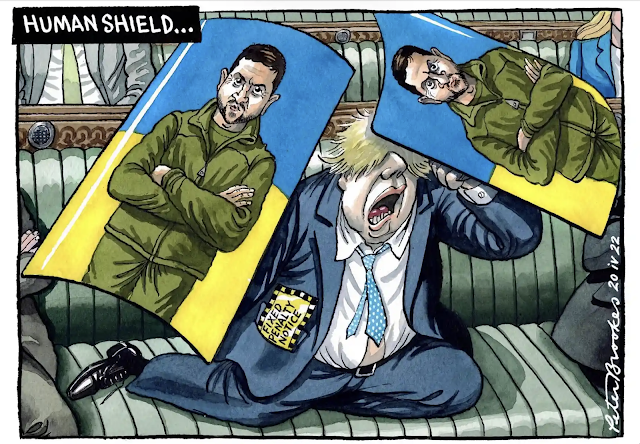 He’s been a punk, a toddler, a narcissistic sociopath… Peter Brookes revisits his most memorable sketch of the outgoing PM, and reveals what lies in store for his successor.

The way Boris used Zelenskiy was so cynical, and so entirely typical of him. He made great play of supporting Ukraine, while actually of course he was using it to hide from everything that was going wrong at home – the fixed penalty notice, and all the rest of it. I was very pleased to find a way of capturing that in this cartoon.

The way I have drawn Boris has changed over the years – partly as a result of how he has changed. Ten years ago, for example, his hair was really quite neat. It was definitely brushed, and even had a parting.

At some point it became cool to muss it up. More recently I noticed he was going bald, so I added a bald spot – I don’t know whether he noticed, but it disappeared soon afterwards; he must have started combing it over.

I’ve always drawn Boris with his hair over his eyes, ever since he was mayor of London. I’ve stuck with that, as it played into that idea of him having no vision. I regret it a bit now though, as the eyes can convey expression and emotion.

I’m so glad Boris is going. He became tiresome in the end. A bit like Trump, you can’t really do him better than he does himself.

My best-case scenario for the new leader would be Liz Truss, who is so appallingly bad in so many different ways that I’m going to have an absolute feast.