The sorry state of political cartooning in Australia 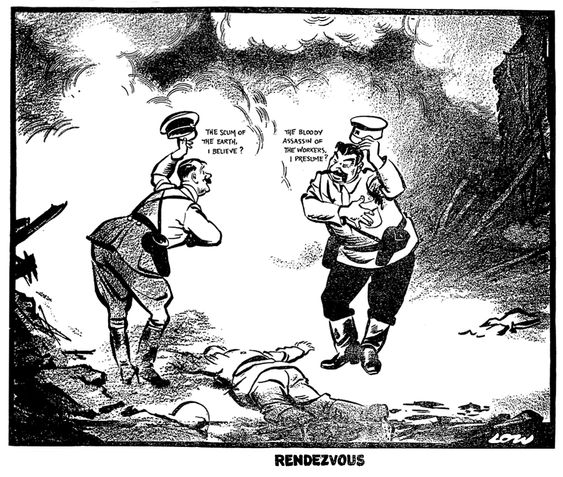 Political cartoons have a long and impressive history. The power they wield is not to be underestimated.

Louis XVI lost his head in part because of a series of salacious drawings that undermined the reputation of Marie Antoinette.

Napoleon was said to have counted the British cartoonist James Gillray among his enemies, allegedly declaring Gillray "did more than all the armies in Europe to bring me down".

And in the early 1940s, whenever the great cartoonist David Low lampooned the Führer in the pages of the London Evening Standard, the German foreign office apparently descended into apoplexy.
Low was put on an SS death list.
Through satire and irony, political cartoonists have the ability to cut through complexity and speak truth to power.

"Their power comes from their emotional punch. It gets in under the reason and the rationality and it speaks to the heart," she tells RN's Big Ideas.

"It helps people articulate something that they've been feeling but perhaps haven't been able to say and certainly not as succinctly and powerfully. So, it's an important part of the political discourse."

But political cartoonists are under threat right across the Western world — their numbers are dwindling.

"There were 200 in America about five years ago," says Brisbane-based cartoonist Sean Leahy, a long-time employee of The Courier-Mail.

And it's a similar situation in Australia where the work is drying up.
'A highly charged issue'
Despite being one of this country's most celebrated and prolific practitioners, Leahy now says he questions the very future of his profession.

"I'm at the pointy end of what's happening to cartooning in Australia and I don't like what I see."

Leahy has twice won a Walkley Award for his work and was once sued for defamation by the notorious former Queensland premier Sir Joh Bjelke-Petersen.

He says even those who still have permanent employment are experiencing a steadily decreasing call on their services.

"I used to draw six days a week and I now draw one day a week. So, it's a highly charged issue for me, I can tell you."

That decline has been obvious to Michael Evans, a senior curator at the Museum of Australian Democracy. Evans is responsible for the annual Behind the Lines exhibition of political cartooning.

"There certainly are fewer of them," he agrees.

"A few years ago, we would get, say, 40 cartoonists represented in the exhibition, now it's down to the low 30s."

For Fiona Katauskas, the decline of political cartooning mirrors the demise of the print media industry more generally.

"Dire, absolutely dire. For people starting out there are just not those freelance opportunities that let people get their foot in the door and allow them to make money," she says.

When Katauskas started her career 22 years ago, newspapers and magazines were plentiful and hungry for illustrations.

"There's a fraction of the cartoons there used to be. When they started cutting them I thought, everyone is going to notice and kick up a fuss, and they didn't.

"I used to get a lot of work from The Sydney Morning Herald and I'd do a political cartoon once a week," she says.

She now supplements her cartooning by also working as a television producer and book illustrator and says very few political cartoonists can make a decent living.

"The last time I worked for the Herald, I got paid about a third of what I'd been paid 14 years before."

A tighter leash
Straitened economic times have also seen a shift in the editorial scope given to political cartoonists by newspaper publishers.

Australian artists long enjoyed a high degree of editorial independence, but as newspapers have become more partisan in recent years, that independence has declined, Leahy says.

"Certainly, cartoons that I have done have not been published. There is censorship of cartoonists now.

"There used to be more voices, different cartoonists saying lots of different things."

Evans argues the more limited political licence now given to many cartoonists reflects a return to the distant past.

He describes the period between the 1960s and the early years of this century as a "golden age" for cartoonists where many became household names. With that, came star power, he says, and greater independence.

"The Pettys and the Tanners, and all of those, they became personalities in their own right, celebrities, and money-earners for the publishers," he says.

"If you look before that, you only got published in the Bulletin, for example, if you toed their line, same with all the other major city newspapers, you toed the line."

The difficulties of transition
Most, if not all, political cartoonists now use digital tools and have a presence on social media.
Some have made the transition to the digital environment, but they're well and truly in the minority, Leahy says.

He points to American animated cartoonist Mark Fiore as one of the few successful examples.

"I think it's the monetising of it. That's the challenge because memes are free. I think people won't pay for it."
There's also a demographic shift at play, Katauskas says.
"I've got teenage sons and newspapers aren't around on your coffee or your dining table in the morning, so young people just don't see them," she says.

"Memes are the thing now, and there is debate over whether memes are taking over as the new cartoons and that's going to be the new thing.

"I think it's more a function of less that cartoons haven't been able to translate to digital, as much as digital hasn't been able financially to support cartoonists.
Which is a shame because cartoons look glorious on screen."

Evans argues the globalised world has opened-up opportunities for some.
"I think we are now seeing more cartoonists self-publishing digitally," he says.

"Years ago, a cartoon would appear in the Sun Herald and it would be read in Melbourne and that's it.
Now it's out there on the web the moment it's published, so anyone around the world can read it, get the joke.

"Obviously, there is not the income stream from that, but in terms of cartoonists actually being able to comment and to get their view across and to continue that long tradition of Australian cartoonists really putting it to the politicians, I think there's still some health in that."

The Australian Financial Review's David Rowe, he says, is a case in point.
His satirical take on Donald Trump's presidency now has a significant following in the United States. 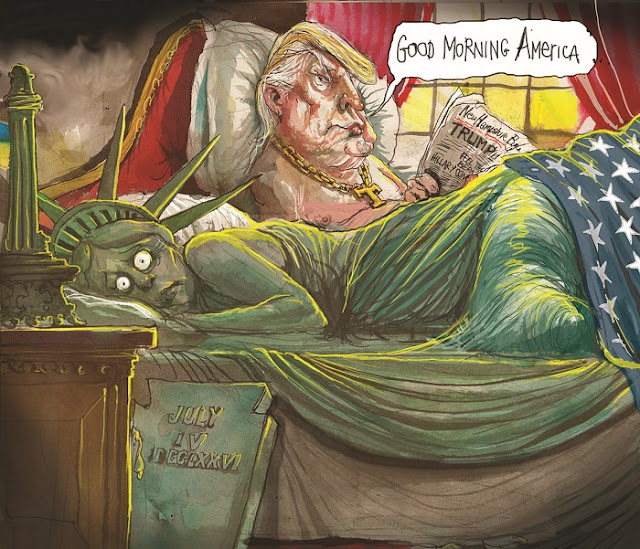 The potential for greater exposure also brings with it an increased risk of misinterpretation, according to Katauskas.

"As a freelancer working from home, what makes perfect sense in your mind might be open to misinterpretation by someone else," she says.

She cites the case of a Sydney cartoonist who attempted to make a satirical comment about modern xenophobia by referencing the image of a sprawling octopus with a Chinese face, a popular racist depiction from the 1890s.

"I saw that and went 'isn't that brilliant'. I just thought he nailed that. That was great. But if you didn't know the original image, you thought he was actually making a [xenophobic] statement with the tentacles.

"And then to see the reaction, he had to say, 'Oh no, no, I didn't mean it. I was actually referring to a specific image that I was taking the piss out of'."

Leahy says understanding how your work might be misinterpreted is now an important part of the cartoonist's craft.

"I have to be moved emotionally by injustice or outrage or whatever it is to have an opinion. I'll go at it without self-editing in the rough process.
Then you spend a fair bit of time just thinking through what can a reasonable person misinterpret this as and what can an idiot?

"You can spend a lot of time thinking about the delivery of it and the nuances, and from this angle and that angle, because you don't want your message to be obscured by being thrown off the scent by something else."
So, what makes for a great political cartoon?

"Sometimes I'll think of something, a good gag, but then I'll think that's not actually technically accurate, actually the policy doesn't say that," she says.

"So, I try and apply some journalistic standards to it, but it's also opinion rather than journalism.

"Unfortunately, all sides of politics are equal opportunity offenders in that regard, so they are all going to get a serve."

For Leahy, it's also ultimately about keeping it grounded.

"It's got to be based in truth, although you are exaggerating it," he says.

"The most effective satire is satire that connects with a truth that the public already feels and knows, then it's quite electric because there's this resonance.

"While cartoonists don't bring down governments necessarily, when they tap into a real feeling in the population which magnifies it, encourages it, they become part of a potent force in the conversation."