Israeli organization calls for removal of Portuguese cartoonist for anti-Semitism 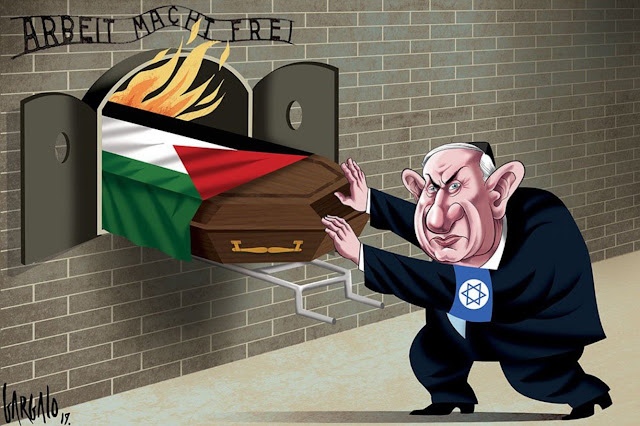 An Israeli-based human rights organization, Btsalmo, sent a letter to the editor of the Portuguese magazine Sabado requesting the immediate dismissal of the cartoonist Vasco Gargalo for a drawing published in November 2019*.

In addition, they demand the elimination of all copies of the image and a public apology. I haven't found a response from the magazine yet.

The drawing shows Benjamin Netanyahu, Israeli Prime Minister pushing a coffin covered with the flag of the Palestinian National Authority into an oven.

On the wall, you can read the motto that appeared at the entrance of the Auschwitz extermination camp, "Arbeit Macht Frei", "Work will set you free". 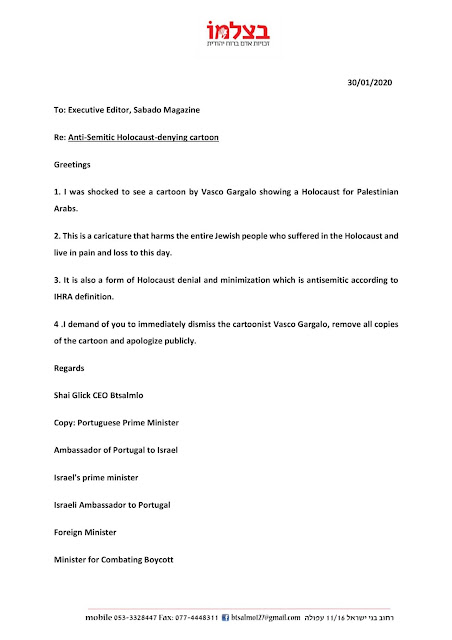 Btsalmo chief Shai Glick points out in his letter that the drawing offends all the Jewish people and that it is also a denial and minimizes the Holocaust according to the official definition of anti-Semitism of the International Alliance for the Memory of the Holocaust (IHRA).

Charges of anti-Semitism in cartoons are one of the most common causes of conflict.

Follow this link to more than 140 cases where cartooning is threatened in different countries.

* On 18 November 2019 the US administration declared that Israeli settlements would no longer be considered illegal, a break with international law, previous US policy and the position of most US allies. 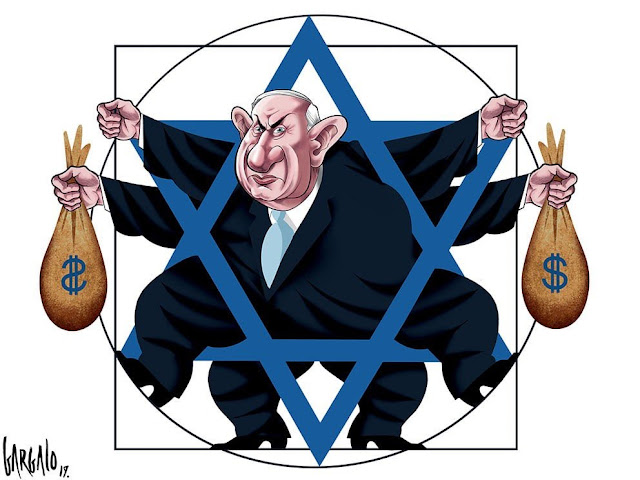 Mocking Israel presents more challenges. We strongly believe the state of Israel and its policies should be open to scrutiny and scathing satire by cartoonists, but we also feel, given the fact that antisemitism is still very much present and widespread in the modern world, there are special considerations to be made.

At the end of last week, a cartoon by Portuguese cartoonist Vasco Gargalo published by Portuguese newspaper Sabado and also uploaded to Cartoon Movement, became the object of outrage and a campaign demanding the firing of the cartoonist and a public apology.

The image uses the harshest analogy possible to condemn Netanyahu’s policy vis-à-vis Palestine. Since the controversy arose, Vasco has faced threats and harassment on an almost daily basis. Defending the image, Vasco says he considers it part of his job ‘to instigate reflection trough controversy.’

Cartoon Movement is based in the Netherlands, where using Holocaust-comparisons as satire is very much frowned upon. We also want to state that this particular image has not, and would not have been, published on our homepage (the curated part of our website).

However, instead of calling for the proverbial tarring and feathering of a cartoonist, we do feel it would be more helpful to have a constructive discussion about how we can criticize the politics of Israel without veering into the realm of (what many feel to be) antisemitism.

Developing an international visual language that allows cartoonists to mock Israel without the need for tropes and stereotypes that are known to be controversial would be beneficial for all, but we'd need a constructive debate to get there, not blind rage.


(Antisemitic drawings: the City of Strasbourg and Courrier international withdraw its prize from Gargalo)

The City of Strasbourg and the weekly Courrier international have "firmly" condemned the anti-Semitic drawings by Portuguese cartoonist Vasco Gargalo, who had received the public prize for "Free pens for democracy", at the World Forum for Democracy last November in Strasbourg.

The City and the weekly say they "just discovered" the cartoons, "including the cartoon of Benjamin Netanyahu" burying "the Palestinians in a crematorium oven, topped with the sinister Auschwitz inscription" Arbeit macht frei "".

They condemn a "heinous amalgam of using the representation of the Holocaust to illustrate the policy of the Israeli government". "It goes without saying that if [we had] been aware of [these] anti-Semitic productions, none of these drawings would have been the subject of a publication or a participation in a prize," the joint statement underlines.

Consequently, out of loyalty “to the values ​​of human rights and democracy”, the City of Strasbourg and Courrier International “today consider that Vasco Gargalo no longer deserves to claim a Prize which promotes these same values , that he has transgressed. "


Vasco Gargalo is a cartoonist regularly published in European newspapers. He received his prize in Strasbourg for a drawing paying homage to Marielle Franco, a Brazilian elected official committed against racism, homophobia and police violence, murdered in March 2018. 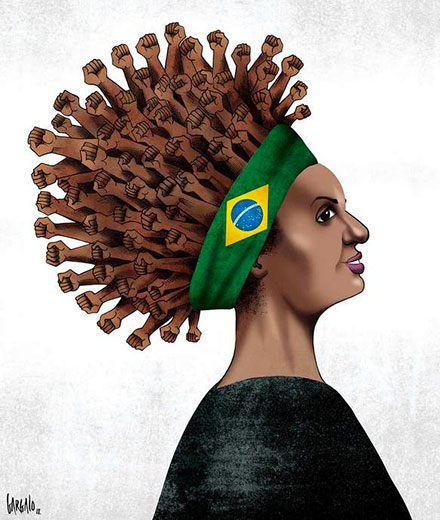