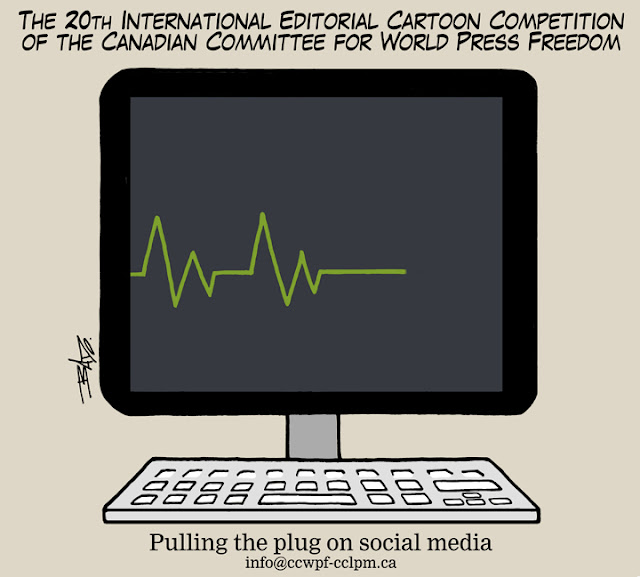 1. The theme for the 20th International Editorial Cartoon Competition is:


Pulling the plug on social media

After a storm over the publication of a cartoon deemed anti-Semitic, the New York Times stopped publishing editorial cartoons in their international publication.
In August, India stripped Kashmir of its constitutional autonomy and isolated it from the world by cutting it off from the Internet.
Thirty years after the fact, the Chinese are still kept in the dark about the Tiananmen Square massacres.
Iran can claim, without risk of contradiction, that its response to the attack on General Soleimani killed 80 American soldiers.
Increasingly, we see that the powers in place do not suffer contradiction.

3. Only one cartoon must be submitted by each cartoonist. It may be either in colour or black and white and must not have won an award.

7. The winners of the Cartoon Competition will be announced on World Press Freedom Day on Tuesday May 5, 2020 and will be advised by e-mail.

8. The winner’s names and their cartoons will be posted on the CCWFP web site.

Send submission by e-mail to:  info@worldpressfreedomcanada.ca
Published by Bado at 5:58 AM