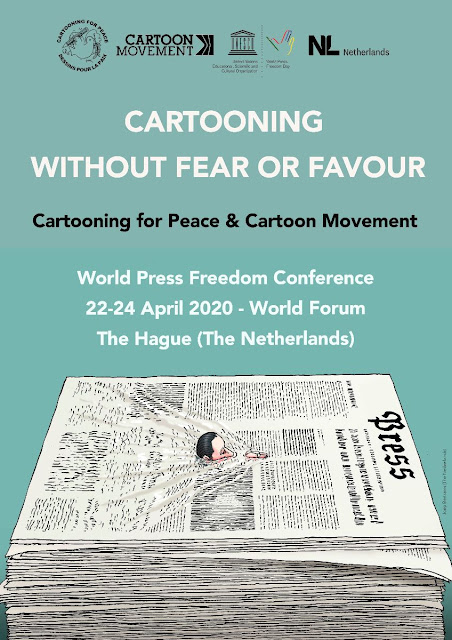 Cartoon Movement, in partnership with Cartooning for Peace, is launching an international cartoon competition for the World Press Freedom Conference 2020.

The World Press Freedom Conference (WPFC) will take place on 22-24 April 2020 at the World Forum in The Hague, a city known for its role in international peace and justice. The organization urges those active in the field of press freedom to participate.

The WPFC will also feature the first-ever World Press Freedom Festival. At least 1,500 participants from all over the world are expected, including a number of high-profile journalists.

Cartoon Movement and Cartooning for Peace invite cartoonists from around the globe, established artists but also new talent, to send in their work for an international cartoon competition and exhibition at the World Press Freedom Conference.

The theme of the competition is "Journalism without fear or favour". In many countries the independence and freedom of media is under attack. Journalists must be able to do their work without fear of or favour from any particular person, opinion, ideology, or other actors.

Media organizations, journalists, people who use media like you and me: we are all confronted with filters every day. They come in many shapes and sizes. Some countries apply filters by censoring, by forbidding media from publishing on certain topics and by locking up journalists.

Companies sometimes also create filters to influence the media. They do this, for example, by deciding not to advertise in a newspaper anymore because of negative reporting about that company. As a result, journalists cannot do their work properly, and we as an audience no longer get to know the full story.

Filters are also caused by a lack of diversity in the media. For example, the number of women we see on TV is still lagging behind the number of men. Media users also encounter filters. Think of algorithms on social media, and how they create your own news bubble.

Freedom of expression is a key human right. It is a prerequisite for a well-functioning democracy where people can live freely. Journalists play an important role in this regard, as an independent source of information and watchdog.

They must be able to do their work independently and in safety. Unfortunately, this cannot be taken for granted. The independence of the media is under pressure. Even now, journalists are being intimidated, threatened and murdered, including in Europe.

Send in your work to cartoons@cartoonmovement.com.

1. This competition is open to all cartoonists from all over the world. Cartoonists can send in work that is unpublished, or work that has been published before.

2. The cartoons should reflect the theme 'Journalism without fear or favour'.

4. Cartoon can be black and white or in color, and can be created using any technique.

5. Cartoons must be sent in via email to cartoons@cartoonmovement.com.

6. Cartoon size must be sent in high resolution, minimum width/heigth of 2500 pixels at 300dpi, JPG or PNG format.

7. Each cartoonist can send in a maximum of three works.

8. Participants must include the following in their submission:

1. A jury will convene in March 2020 to select the cartoons for the exhibition and to determine the winner.

3. Selected works will be included in the exhibition that will be on display for the duration of the conference. Selected artists will receive a small fee for the inclusion of their work.

4. The winners and the selected works will be announced in March.

1. Copyright of the submitted cartoons will remain with the artist.

2. Submitted cartoons may be used (non-exclusively) by the competition organization and affiliated organizations for the exhibition and for promotional purposes, in print and online.

This competition is organized by Cartoon Movement in partnership with Cartooning for Peace.

The Cartoon Movement jury has selected a longlist 70 cartoons, presented here in no particular order, from 600 submissions in the Journalism Without Fear or Favour Cartoon Competition.

The World Press Freedom Conference (WPFC) has been postponed until October; a shortlist of 10 cartoons (that will be printed on large panels at the conference) and the winner will be revealed later this year.
Published by Bado at 7:07 AM