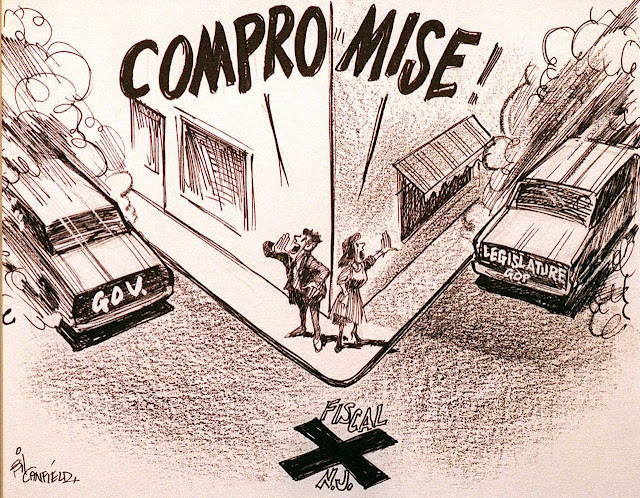 Editorial cartoonist William (Bil) Canfield, who entertained millions of newspaper readers, died peacefully on January 30th at his home in Phoenix, Ariz., with his daughter Susan at his side. He was 99.

He also illustrated countless books, among them John Cunningham’s series on the history of New Jersey. At his son’s request, Canfield sat down 10 years ago and figured out how many drawings he had done during his career. It came to nearly 150,000. He was sketching up until his last year.

When Canfield was a boy, his father established a nightly ritual of presenting his son with a drawing he had done of a recognizable person. When his father arrived home one night without one, he was disappointed. “You do it,” his father said. And from then on, that’s exactly what he did.

Canfield was born Oct. 8, 1920, in East Orange to Walter and Mildred Canfield. During his school years, he drew constantly while also actively participating in sports — mainly baseball and football.

He once confessed to his son that his choice to become a cartoonist had much to do with his not having been good enough to fulfill his first dream, playing professional baseball.

After high school, he was awarded a scholarship to the American School of Design. After graduating, he was hired by The Racing Form as an artist — a career that came to an abrupt halt with the Dec. 7, 1941 surprise attack on Pearl Harbor.

He enlisted in the Navy and served four years as Boatswain’s Mate First Class on the battleship USS Massachusetts. The first months of his tour were in the Mediterranean, where his ship participated in the sinking of the French battleship Jean Bart, which had fallen under German control.

The battleship then moved on to the Pacific for the duration of his tour.

Canfield also drew cartoons for the ship’s newsletter, The Bay Stater, and painted figures on the ship’s hull as morale boosters. After the war Canfield kept in touch with his shipmates and attended their yearly reunions in Fall River, Mass., right up to the final gathering in 2015. His work remains displayed on the ship to this day.

Following his return from active duty, Canfield married his high school sweetheart, Dorothy Jean Levins, and moved to Tinton Falls, where his parents had purchased a 14-acre farm during the war.

The newlyweds moved into the caretaker’s cottage and began a succession of additions that eventually transformed it into a rambling ranch house.

Canfield intended to return to the Racing Form, but there was no opening. So he went to see the legendary cartoonist Bill Crawford at the Newark News. Crawford told him to return after doing 100 drawings — advice he routinely told job applicants seeking cartoonist positions at the paper.

Most never returned. Bil went home and did 100 drawings in two days. When he presented them to Crawford, he was hired.

He never lacked for material.

“After God created cartoonists,” Canfield once said, “he realized they needed a subject. So he created New Jersey...”

Rick Everett, retired managing editor of The Star-Ledger, said working with Canfield was a treat.

“He had a wry sense of humor and was a calm voice of reason amidst the chaos of the editorial board in the early days," Everett remarked. "Drawing was second nature for him and his images of people were always spot-on.”

The artist’s work had an impact on the subjects of his cartoons, as well.

Ruthi Byrne, wife of the late Gov. Brendan T. Byrne, says her husband had a considerable collection of Canfield’s cartoons drawn during Byrne’s eight years in Trenton. Viewed chronologically, she says, “One can see the entire political history of his years as governor.”

“I think he was the best cartoonist in the country,” says former Gov. Tom Kean. “His work is a monument to New Jersey — and its problems. It covers six governors and numerous political figures, and all admired his work.”

Kean says he treasures his collection of Canfield cartoons. “When you were a political figure in the state, being featured in a Canfield cartoon was a real mark you’d come a long way. The first time I appeared in one, I was in the Legislature, and I thought, ‘I’ve arrived!’"


Like the great cartoonists,” says John Farmer, director of the Eagleton Institute of Politics and a university professor of law, “Bil could — in a single image — remind you that your spouse is not the only one who stops you from believing your own b.s."

Canfield retired from the Ledger in 1995, and he and Dottie Jean moved to Phoenix to be close to their daughter Susan and her husband. But Canfield wasn’t ready to give up being a working artist.

One day the gregarious Canfield walked into the office of the local weekly newspaper, The Sonora News, and announced, “This is your lucky day! I’m a famous artist from New Jersey, and I’m volunteering to do cartoons for your newspaper.”

The charmed editor looked at his work, accepted his offer, and his cartoons started appearing on the editorial page each week.

Canfield also did oil portraits of people and their pets and attended life-drawing classes.

Oddly enough, he also had some free time, during which he enjoyed painting, sculpting, body surfing, sailing, camping and reading modern literature and history.

Canfield is survived by his son, Craig Canfield, of Brooklyn, his daughter and son-in-law, Susan and Jeff Carneal, of Phoenix, his grandson Darryl Canfield of Howell, NJ, and a niece, Andrea Simonsen.
Published by Bado at 12:00 AM