From The Columbus Free Press. 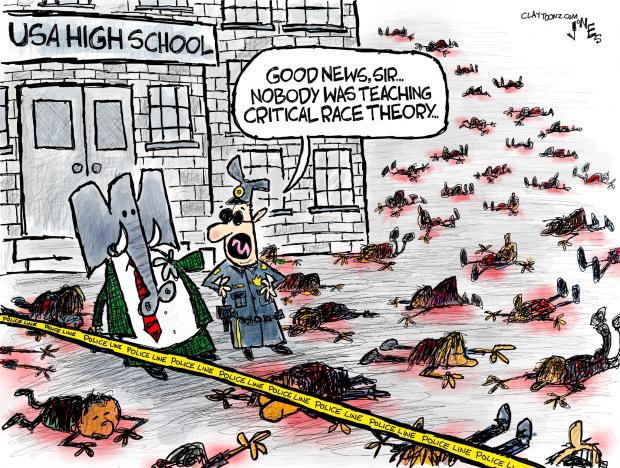 Clay Jones of Virginia, is the 2022 winner of the RFK Human Rights Journalism Award in Editorial Cartooning.
His work was awarded for its "unique style" which is "energetic" using "image and text to comment on larger issues."
They stated that his cartoons hit on themes of human rights, imbalance of power and systemic racism.
"Winners of the 2022 RFK Journalism Awards were selected in student and professional categories from over 350 entries across print, broadcast, and new media categories, encapsulating some of the most exemplary reporting from the past year," PR Newswire reported.

The Awards website stated: "The Robert F. Kennedy Book Award was founded in 1980 with the proceeds from Arthur M. Schlesinger Jr.’s bestselling biography, Robert Kennedy and His Times.
Each year, Robert F. Kennedy Human Rights presents an award to the book that, as Schlesinger said, 'most faithfully and forcefully reflects Robert Kennedy’s purposes – his concern for the poor and the powerless, his struggle for honest and even-handed justice, his conviction that a decent society must assure all young people a fair chance, and his faith that a free democracy can act to remedy disparities of power and opportunity.
Founded by the reporters who covered Robert F. Kennedy's historic 1968 presidential campaign, the Robert F. Kennedy Journalism Awards honor outstanding reporting on issues that reflect Robert Kennedy's concerns.

According to Clay's website, he "is a far-left liberal and proud of it. He has never been a member of a political party, and never will be. He believes it is his daily goal to lampoon authority and make it look as ridiculous as possible.
'My cartoons do not tell readers what they should believe. I hope they simply challenge people to think.'
He still believes in journalism ethics and refuses to participate with political campaigns or work with political activists. He does vote."
Published by Bado at 6:54 AM