From The Irish News. 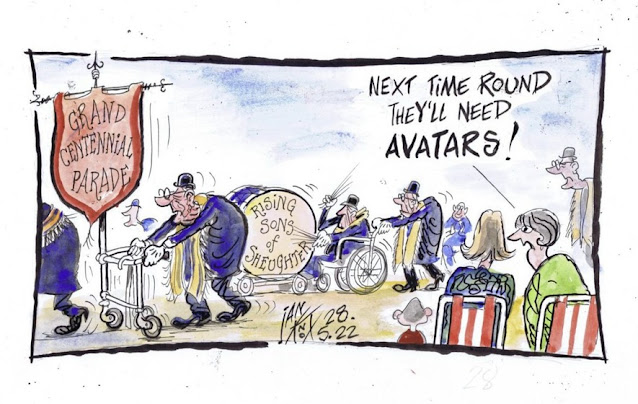 Veteran Irish News cartoonist Ian Knox has been "completely vindicated", the newspaper's editor has said, after press regulator IPSO dismissed complaints against two of his drawings.

Several people complained to IPSO about cartoons published in The Irish News on May 27 and May 28.

The first cartoon depicted loyalists upset by US congressman Richard Neal's use of the word "planter" to refer to people from a unionist background. 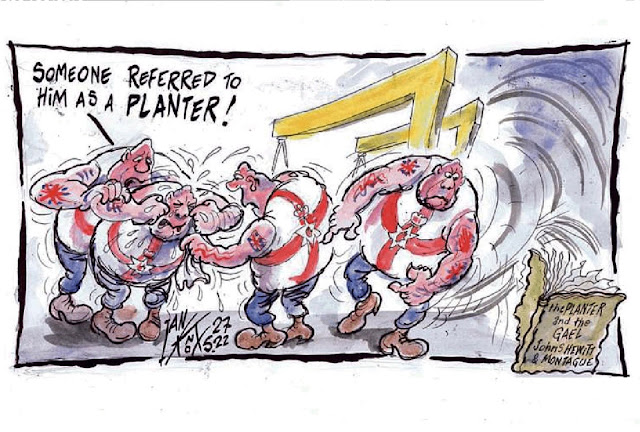 Unionist leaders criticised the use of the term but Mr Neal has previously said he was using a historic reference to the plantation of Ulster in the late 17th century.

The second cartoon which drew complaints showed elderly Orange Order members at a parade to mark the 100th anniversary of the foundation of Northern Ireland.

IPSO received several complaints, including that the cartoon of the loyalists was offensive towards a minority group, an inaccurate stereotype and had raised tensions.

Other complainants suggested that the cartoon of the orangemen was ableist and ageist.
However, IPSO found no grounds to investigate any of the complaints.

It said Clause 12 of the Editors’ Code is "designed to protect specific individuals mentioned by the press from discrimination based on their race, colour, religion, gender identity, sexual orientation or any physical or mental illness or disability".

"It does not apply to groups or categories of people," it said.

Irish News editor Noel Doran said IPSO concluded there were no breaches of the Editors' Code.

"Ian Knox is a courageous and gifted cartoonist who for over four decades has been satirising extremists on all sides - including those from the same Ulster-Scots background as himself," he said.

"While the use of humour in a divided society can sometimes bring risks, it was still surprising that Ian's contributions of May 27 and 28 produced such an intemperate response in some quarters.

"The London-based Independent Press Standards Organisation has now looked into the matter and concluded that no breaches of its Editors' Code took place.

"It will be noted that IPSO did not feel the need to seek a response from The Irish News to the complaints, and I regard the outcome as a complete vindication of Ian and his work."
UPDATE
"Ian Knox on the delicate art of satirising sensitive subjects" in The Irish News.
Published by Bado at 12:00 AM