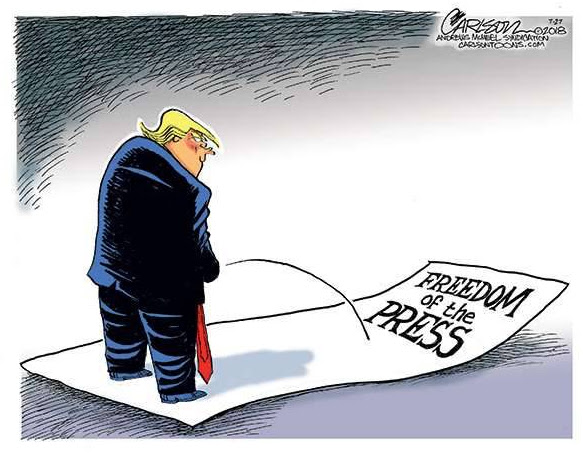 Stuart Carlson, who was the cartoonist for the Milwaukee Sentinel and the Journal Sentinel from 1983 to 2008, died Friday June 10th at age 66.
Carlson was raised in West Bend, Wisconsin and earned a Bachelor of Fine Arts degree in 1978 at the University of Wisconsin–Milwaukee.
After graduating, Carlson worked as a cartoonist for the West Allis Post/Star and as a reporter for the West Bend News.
He became the Milwaukee Sentinel’s political cartoonist in 1983.
His many awards include the National Press Foundation Award for best editorial cartoons and the John Fischetti Award for best single political cartoon.
Stuart Carlson has a great sense of humor, something you’d expect from a professional cartoonist, but he could be forgiven for having a more downtrodden attitude considering he was one of casualties of the Journal Sentinel’s Great Purge of 2008. 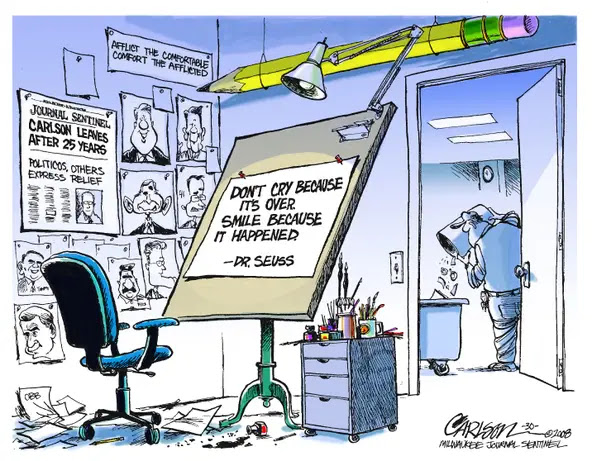 So, why were political cartoonists the first to walk the plank?

“It’s not like they were going to cut back on their coverage of the Packers,” Carlson says, laughing. “And all a political cartoonist does is piss people off. I wasn’t coming from a conservative, right-wing perspective and I think that’s the demographic a lot of papers want to appeal to because that’s where the readership is growing.”
Published by Bado at 1:50 PM