One of the most prominent and politically influential Israeli cartoonists, Ranan Lurie, passed away on Wednesday June 8th in the U.S. at the age of 90.

At the height of his career Lurie's cartoons reached hundreds of millions of people, publishing cartoons of hundreds of political leaders in thousands of newspapers and magazines across the globe.
Among his cartoons are Israeli prime ministers Ben-Gurion, Rabin, and Eshkol, as well as hundreds of high-ranking leaders and personalities, dictators and terrorists from around the world.

Lurie's parents, Yosef and Shoshana Lurie, traveled from their Tel Aviv home in 1932 to Egypt to give birth to Ranan, their first child, in the home of his wealthy grandfather, who worked in Egypt as the chief agent for the Carmel Mizrahi wine company.
Ranan Lurie drew his first cartoon nearly 70 years ago, during Israel’s War of Independence.
At the time he was a 16-year-old fighting in the ranks of the Etzel, the pre-state underground militia led by Menachem Begin, also known as the Irgun. 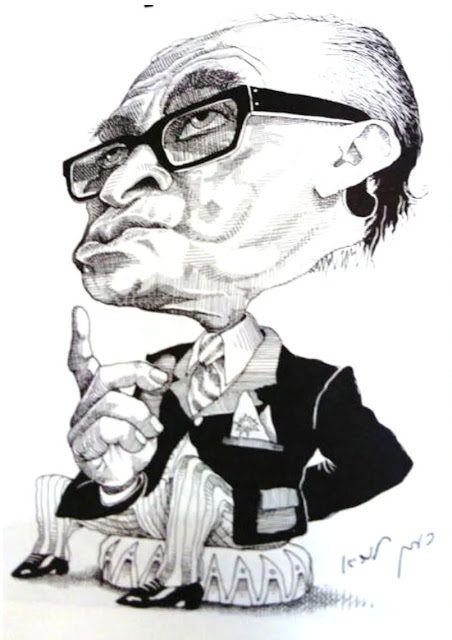 A grenade that was lobbed at them wounded Lurie in the arm, and he was sent to Hadassah Hospital in Tel Aviv. It took him several weeks to recover, and he resorted to pencil and paper and to pass the time.
In 1956, Lurie joined Yedioth Ahronoth newspaper as its political cartoonist, a position he held for 11 years.

Lurie's first cartoon break into the big league of the international media came with a spread in Life magazine in 1957.
Ten years later, Lurie moved to the United States.
At first, Lurie was the chief political cartoonist for Life magazine and The Wall Street Journal, and later he regularly published cartoons in The New York Times and then in Newsweek, where he was given a weekly page called “Lurie’s Opinion.”
He made his big money, he says, from syndication – which increased the distribution of his cartoons, propelling him into the Guinness Book of Records.
Published by Bado at 12:31 PM