"* This Exhibition is a Work Event - The Tale of Boris Johnson" 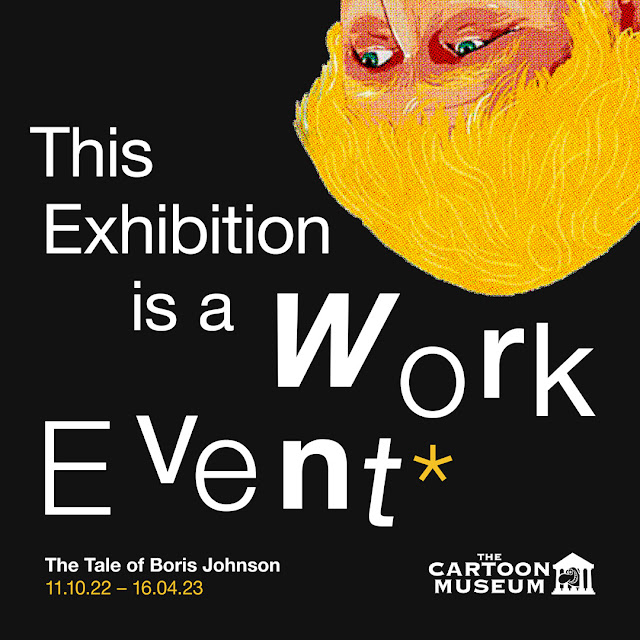 "This Exhibition is a Work Event - The Tale of Boris Johnson", presented by the Cartoon Museum, is a look back on his three years as one of the most bombastic and controversial Prime Ministers we've ever had.

More than 50 artists' work recount the most tumultuous display of British politics in recent history.
"Johnson on the way back? Truss, Trump … when politics is this crazy, only cartoons can do it justice" by
Martin Rowson:
The Cartoon Museum’s new show of Boris Johnson cartoons, This Exhibition Is A Work Event, chronicles Johnson’s time as prime minister through the work of 50 different cartoonist.
But there is a question that, even now – as Liz Truss self-detonates and Tory members talk about the possibility of bringing him back – we must ask: were any of us actually delivering the coup de grace to Britain’s Worst Ever Prime Minister (Up Until Then) by caricaturing his defining ridiculousness?
Or did we merely frantically scramble to keep pace with the madness his premiership added in spades to the preexisting madness of the past six – or arguably 14, or even 5,000 – years?

Many US cartoonists faced the same dilemma with Donald Trump.
You couldn’t, as many of them have told me, make this shit up. What are you meant to do when the targets of your satire are the masters of their own absurdity?

I once described Trump and Johnson to an American audience as two cheeks of the same arse (and then took another 10 minutes explaining what I meant), because both successfully controlled the laughter agenda, more or less from the beginning.
And I mean from when they could first walk and fall over for comedy effect.
Trump and Johnson are both sociopathic narcissists who feed, like vampires, on our horrified attention, using arsing about like any class clown.
But herein also lies their achilles heel. Almost their whole purpose in life is to get us to laugh with and not at them.

To give him his due, Trump can crack fairly effective, if brutal, jokes, whereas Johnson is merely a Tory or newspaper editor’s idea of funny and lands punchlines like the Hindenburg.
Nonetheless, he has always understood the importance of the arsing about, hence the whole contrived “Boris” act.
Twenty years ago, commissioned to produce a Spectator cover when Johnson was editor, and increasingly enraged by his failure to confirm the precise specs I needed, I phoned him and got the usual Johnsonian harrumphing noises.
I told him, maybe intemperately, for once in his life to drop the PG Wodehouse bollocks, to which he replied: “What you call the PG Wodehouse bollocks has served me very well thus far.”
And yet a couple of years later, when he was by then London mayor and was leaving a party at the Spectator’s offices, I encountered him standing on the pavement.
“What’s it like having responsibility finally thrust on your shoulders, eh, Boris?” I quipped, and his reply this time was abject. “All these awful people like you keep doing these terrible drawings of me,” he whined, pouting.

Part of the car crash of Johnson’s personality is that he’s a terrible liar.
Not just like that, but because you can see in his face the precise truth as to his mood at any time. On this occasion he wasn’t joking, he was whingeing, seemingly incapable of understanding why everyone everywhere wasn’t laughing gratefully at his hilarious antics.
Similarly, seven years later he was due to open an exhibition of cartoons I’d drawn about London politics over a decade and a half.
He pulled out of the event an hour before we opened, clearly unable to cope in real time, with TV cameras present, with the prospect of me pointing to a cartoon of him caricatured as a fatberg and be expected to take the joke in good part.

Ultimately, Johnson’s fall was like Nicolae Ceaușescu’s in reverse.
The Romanian politburo knew the boss’s days were numbered when the crowd at a rally started to laugh at him.
We knew “Boris” was stuffed when, at the final PMQs before his defenestration, the Tory benches stopped laughing.
He’d finally completely lost control of the laughter agenda. Which, thank God, means it’s back where it belongs, with the cartoonists.
Martin Rowson 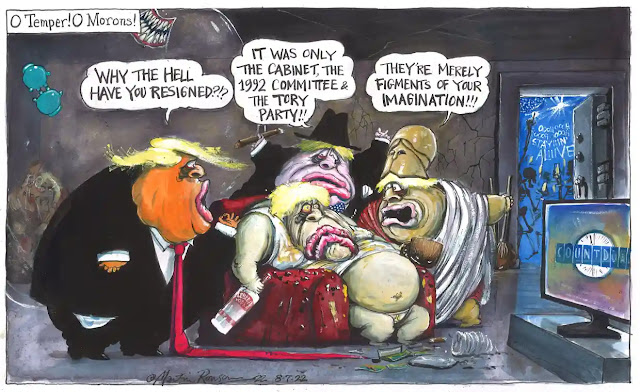 I drew this when Johnson resigned to capture his defining entitled delusion. After his own side forced him out he carries on (as his Eton housemaster wrote of him) as if rules for everybody else don’t apply to him.
But behind the blustering bonhomie there remained a sullen, petulant, pouting manbaby, refusing to believe we’d all stopped applauding with joyous gratitude because he’s so lovely.
Various visions of “Boris” – Trump the populist, Churchill the heroic war leader and Pericles the great orator – buoy up an unpopular coward barely able to string together a coherent sentence. Them’s the breaks.
Steve Bell 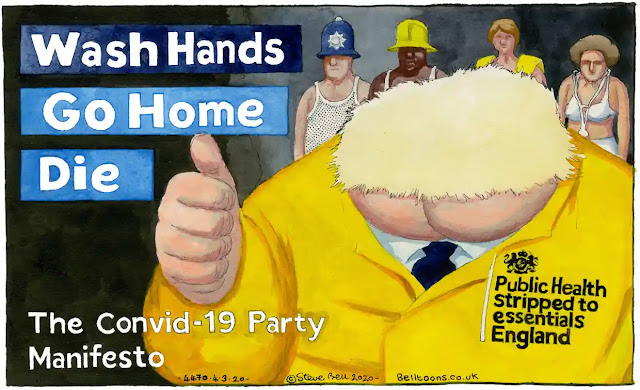 This was drawn at a time when the Covid-19 outbreak was very much in the news, but a couple of weeks before lockdown was actually declared.
A photograph had appeared of Boris Johnson in a bright yellow coat bearing the logo of Public Health England, the first I had ever heard of such an organisation.
This drawing apes the design of the cover of the 2019 Conservative party election manifesto showing Johnson giving the thumbs up beneath the slogan: “Get Brexit Done Release Britain’s Potential”

It was a simple step to replace this with an equivalent punchy slogan summing up what seemed to be the government’s then (and subsequent) policy on Covid, public health and public services in general.
Nicola Jennings 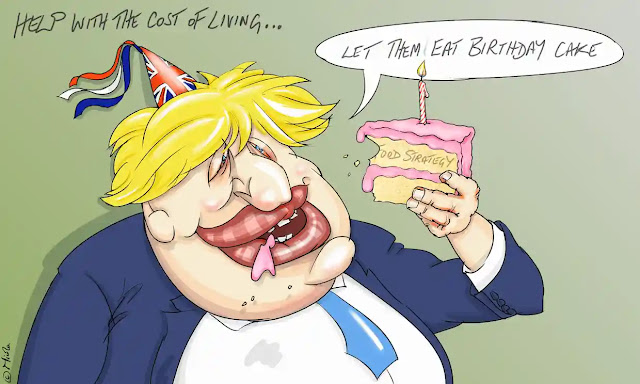 This cartoon was drawn the day the government released a white paper on its new food strategy that contained little to address the soaring cost of food and cost of living, and also backtracked on Boris Johnson’s pet anti-obesity programme.
“Let them eat birthday cake” alludes to Marie Antoinette’s famous indifference to the plight of the poor which the new strategy reflected, and simultaneously to the Partygate scandals when Boris was “ambushed” by his own birthday cake.
It also echoes his cakeism fantasy that Brexit would let Britain have its cake and eat it.