"Putin’s Russia: The Rise of a Dictator" 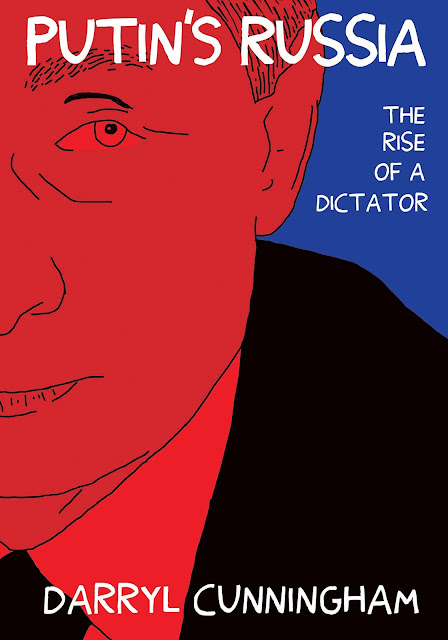 Vladimir Putin is purportedly the richest man in the world. Of course, much of his wealth is stolen from ordinary Russian people.
In Putin’s Russia: The Rise of a Dictator, cartoonist Darryl Cunningham recreates the life and times of Putin, from childhood to permanently installed ruler of Russia.
Along the way, events like the war in Syria, the 2016 U.S. election, plenty of murder, injustice and corruption, and a seemingly endless list of dead journalists and jailed opponents unfold.
A graphic novel might seem an unlikely vehicle to document Putin’s inexorable climb from scrappy kid to one of the world’s most powerful human beings, but Cunningham’s spare drawings, filled with blank space, allow for the unspoken to be revealed.
Often this unveiling occurs in Putin’s face — blank, inscrutable, with an odd, sinister smile plucking the corners of his mouth.

Born in 1952, Putin came of age in postwar Leningrad. Much of his young life was unremarkable, but after joining the KGB he began a rapid ascent upwards, a trajectory helped along by Boris Yeltsin appointing him to the presidency in 2000.
Crises such as the 2004 Beslan school siege, where Chechen terrorists took more than 1,100 Russian students, teachers and parents hostage, helped cement Putin’s presidential powers.
The book is a reminder of how many deeply weird things have taken place under Putin’s rule.
Journalists falling out of windows, political rivals poisoned with radioactive tea, and a perfume bottle filled with Novichok, a Soviet-era nerve agent that killed a British woman and sickened a number of others.
As a strategy to foment chaos, uncertainty and fear, such mafia-style techniques have proven extraordinarily successful.
Horror and a strange type of capering comedy suffuse Putin’s Russia, making it a deeply compelling, wildly entertaining read.
On the eve of war potentially breaking out in Ukraine, The Tyee had a few questions for Cunningham. 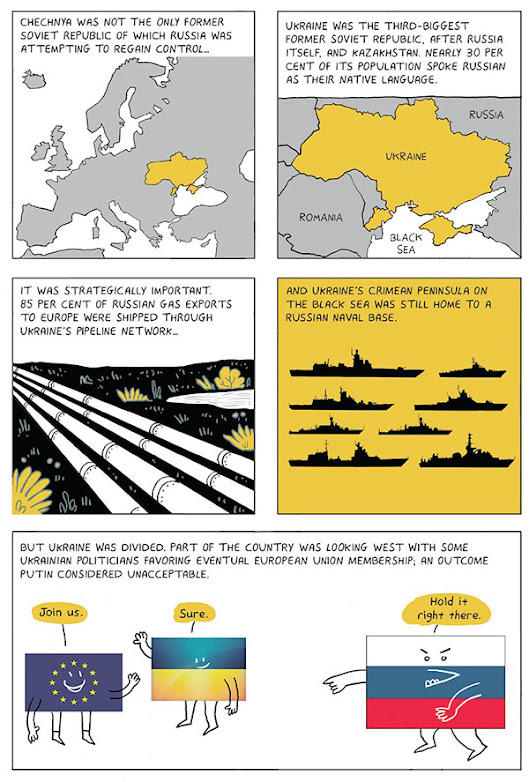 The Tyee: How long have you had Putin in your sights before you decided to write the book?

Darryl Cunningham: Putin’s Russia: The Rise of a Dictator is a natural extension of my previous book Billionaires: The Lives of the Rich and Powerful (a book about the One Per Cent).
When I was promoting that book, I jokingly kept saying that my next book would be about Putin. Not really thinking I would do it, but the more I gave it thought, the more it seemed like a good idea.

Some have estimated Putin’s worth about $200 billion, which puts him well into the top five richest people on the planet. Putin and his crime cartel have been stealing from the Russian people for over two decades now and have amassed colossal wealth.
How he achieved his position, and what he’s done since, makes for a fascinating and horrifying story.

Putin’s inauspicious origins make him seem an unlikely candidate to become one of the world’s most successful autocrats. What’s his secret to staying in power?

He’s ruthless. He grew up fighting bigger kids in the gangs on the streets of St. Petersburg (then Leningrad) after the Second World War.
A small but tough kid who it was said would do anything to beat his opponent in a fight. Fighting dirty was his style, and it still is.
Were you ever nervous about taking him on as a subject, given the things that have happened to anyone who has critiqued him and his methods?

Not at all. There are numerous books published about Putin and modern Russia. Only journalists and critics of Putin inside Russia itself need fear retaliation. I’m a small fish amongst the many writers who have covered this subject.

What do you think is the biggest misconception that people still have about Putin?

That he is a regular statesman or politician. He’s essentially a KGB-trained thug, a gangster whose crime cartel has been plundering Russia’s wealth for over 20 years.

Adam Curtis’s documentary HyperNormalisation credits Vladislav Surkov, one of Putin’s closest advisors, for creating an environment in which people weren’t able to differentiate between what is real and what is made up. Do you feel like this strategy has seeped out to become something of a global phenomenon?

Yes, I do. Whether on purpose or whether it’s developed organically, the swamping of the truth under a vast ocean of disinformation has helped fracture society down political lines and promoted often violent extremism, not just in the West, but worldwide.
Why do you think Putin still enjoys such wide support from the Russian people, especially since he’s been stealing from them for years?

Well, does he? It’s hard to genuinely judge the truth in what is a totalitarian regime where the media is tightly controlled, and political opposition silenced. People are hardly going to express their displeasure of Putin openly.

Given the current uncertainty in Ukraine, what do you think people need to know about Putin’s intentions? Is this a means of cementing his legacy or something else entirely?

The Kremlin portrays the war on Ukraine as Russia simply defending its borders from an encroaching NATO. But the average Ukrainian’s interest in joining NATO was almost non-existent before Russia invaded Crimea. Ukraine has only turned to NATO out of fear of Russia.
If Russia had left Ukraine well alone, this would not have happened. But the whole argument that Russia is defending itself against NATO is nonsense anyway.

All the aggression in eastern Europe has only come from Russia. They chose to annex Crimea. The NATO defense is mere pretext. Putin needs a useful enemy to blame, and the U.S. and NATO fit the bill. No powerful country has the right to invade another sovereign state.
In what way is Ukraine a danger to Russia? Putin’s aim here is to push Russian territory back to the borders of the old Soviet Union. He intends to make Russia great again.
Published by Bado at 12:00 AM