An interesting article by Mickey Bonner in the Spring 1984 issue of the Ryerson Review of Journalism: 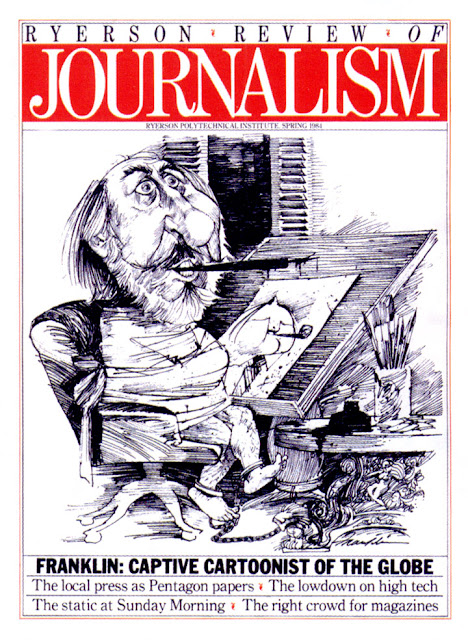 The Creative Agonies of Ed Franklin
Despite 16 years of accomplishments, he feels too contained, too controlled by The Globe and Mail: "Sometimes, they edit the vitality right out of a cartoon" 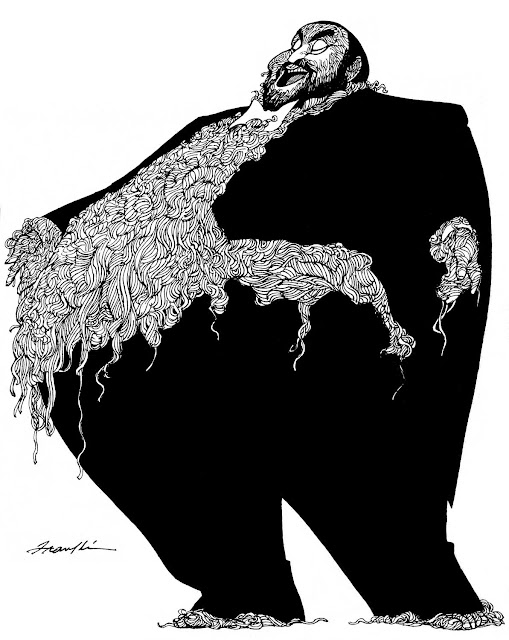 There he was, Leonid Brezhnev. He was standing stark naked, with a dreamy look on on his face. And he was holding his genitals inside a hot dog bun while squeezing mustard out onto them. "O.K., America," he was saying with his tongue still half out of his mouth. It was embarrassing. It was direct. It was penned by Terry Mosher (Aislin) of the Montreal Gazette. The caricature did not appear in the Gazette; it was published many months after it was drawn in Croc, a Montreal humor magazine. "It doesn't upset me that many of my cartoons are rejected by the Gazette because I can always have them published in my cartoon books," says Mosher. The Montreal cartoonist is a great admirer of Franklin. "Ed doesn't practice the sledge-hammer approach to drawing, but is very delicate. He adds a lyrical quality to his work, but is still a true cynic."

Back at his studio, Franklin let out a hefty laugh when I reminded him of the Brezhnev cartoon. "Terry likes to draw the four-letter word, That's not my bag. Even if I was working for the Gazette it wouldn't be. But Terry got his reputation by being a radical. And even Andy Donato of the Toronto. Sun likes to shock."


Yet shocking an audience can border on libel and civil defamation. A Toronto lawyer who advises several magazines explains that "under the laws, if a person is exposed to hatred, contempt, ridicule or has his reputation injured, he can sue for damages." However, he says, while editorial cartoonists frequently defame their subjects, they are not charged because they did not actually libel them "Libel is a tort and you cannot commit a tort if you have a defence. In the case of political cartoonists, the saving defence is that of fair comment if the subject and situation are matters of public interest."


Canadian politicians have launched many legal suits over cartoons, but because they place themselves in the public eye, they become fair game and have difficulty winning. A Gale points out, "The role of an editorial cartoonist in poking fun at politicians is regarded as almost a sacred tradition in Canada," It dates back to 1849, when John Henry Walker's political cartoons began in Punch in Canada. From 1873 John Wilson Bengough carried on the admired art as editor an illustrator of the political cartooning periodical Grip. Both attacked issues just then beginning to surface-east-west alienation, the French-English conflict, the America influence-and especially, the antics of politicians. Then see now, the favorite target was the prime minister.


The only time that a Canadian politician successful sued an editorial cartoonist and newspaper publisher was the William Vander Zalm suit against the Victoria Times. On June 22, 1978, the paper ran an editorial cartoon by Bob Bierman depicting the then provincial minister of Human Resources gleefully pulling the wings off flies. But although Vander Zalm won his case in 1979, the verdict was overturned on appeal in 1980.


Franklin shook his head when we discussed the B.C. cartoonist. "It's terrible what they did to Bierman." Defamation laws should not be applied to editorial cartooning, said. "That's what cartooning is all about-it is to ridicule. Take a guy who is operating in a place that affects us or law-making procedures, Well, there he is and he's bumbling. So you try to show him he's a bumbling idiot. A cartoon is I made to say nice things about people. The very idea of a cartoon is to make a guy look bad, to ridicule him, to show the quickest, simplest way you can that the guy is do something wrong or that he is out of his element in that job.


Franklin glanced at the large framed cartoon lean against the wall, the color cartoon that had run after patriation of the Constitution. "Just look at those guys," he says with a smile. "What a bunch of kids." The premiers shorts and knee socks and with bandages across their faces, arms and legs, stand in a line looking humiliated while beaming Trudeau kneels, arms outstretched, in front of Queen holding the Constitution. "You know, at the Globe automatically hated Trudeau. They would support anyone but Trudeau," he said, laughing. "And when we support a candidate for an election, we wait about six months and then rip the hell out of him."


January 28, 1983, is a day Franklin will never forget. Nor will Joe Clark. In Winnipeg's convention centre, the Conservatives were meeting to decide whether Clark's leadership would be challenged. And in Toronto staunch Clark supporters were phoning the Globe to complain about Franklin's cartoon strip depicting Clark as a decisive leader coolly preparing for an important day-and arriving at the elevator with no pants on. "Some people at the convention called and said the guys who were after Joe had made copies of the cartoon when the paper arrived and posted it around the centre," said Franklin, laughing heartily. Later that day, the Tories voted to hold a leadership convention. Clark was on his way out.

"You know, he's probably a really nice guy, but I just didn't think he was right to be prime minister," said Franklin, adding quickly that he still didn't believe his cartoon had any influence on the outcome of the Tory vote. "They were going to do that to him anyway. I don't think I brought Joe Clark down, that's ridiculous." The cartoonist laughs whenever he thinks about the Tories. "What a vicious bunch of guys. They've got their knives out all the time."


Knives are sharp but pens are slaughterous, argues Denis Massicotte, until recently press secretary to Ontario Premier Bill Davis. While maintaining that Davis has a good sense of humor and is seldom affected by political cartoons, Massicotte firmly believes that "editorial cartoonists can certainly damage a politician's credibility. Joe Clark is a classic example. The man was always unjustly portrayed as a weak leader-with simple eyes, a droopy chin, a flabby face, and, yes, even with mittens. How can you take a man like that seriously? And what's worse is that the public is so vulnerable to what they see in the newspapers. They will quickly pass judgment on a politician according to the way he is presented in the press, whether it is in a photograph or caricature."


While Franklin doesn't enjoy ridiculing a person's physical appearance, if a subject is fat or short or crippled he must honestly show him that way. "Sometimes, I've done caricatures of people and maybe they didn't even see them, but I still felt lousy for having done them." But, he maintains, a politician's fate is largely in his own hands and editorial cartoonists don't have the power to ruin a career solely by ridiculing someone's appearance.


Franklin stood up and lit another cigarette. "I've never really stopped and figured out what I'm all about in cartoons. To me, it's just like having a job and going to work every day. I don't believe that I'm going to move anything or shake anything up. But Mosher would, though. Donato would. Maybe even Macpherson would think he's doing something. I'm really not sure I do."


He touched the stack of editorial cartoons on the table and looked at them pensively. "No, I don't believe I have any power, but I do know some cartoonists who think they have some kind of power, which is really nothing more than having a big ego. I think the editorial cartoonist is. Largely ineffective and the newspaper industry could just do without him altogether."


Franklin walked over to the window and looked out at the trees in the park. He seemed to be quietly searching, and then he found the statement he wanted to make.. "A lot of us now are just trying to be funny, just going through the motions,"
He paused.
"Sometimes, I think cartooning is dead."

You can read his obituary by Val Ross on the ACEC website.
Published by Bado at 6:35 AM