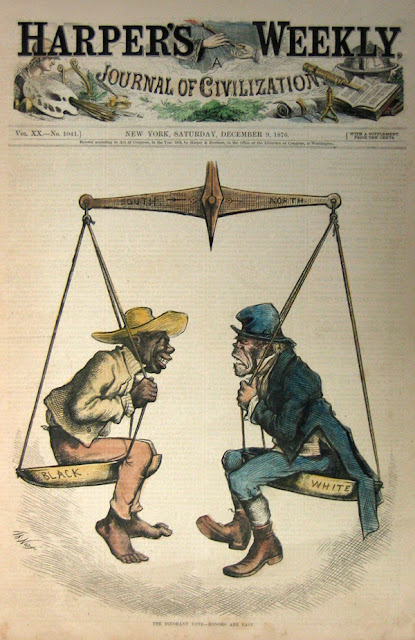 Biased. Disrespectful. Offensive. All sterling job qualifications for any good editorial cartoonist. But "racist"? Woah!
Thomas Nast was the granddaddy of the American political cartoon. And having lived in New Jersey, he's been nominated for induction into the state's 2012 Hall of Fame. But last month, legislators of both political parties fought to take his name off the ballot. 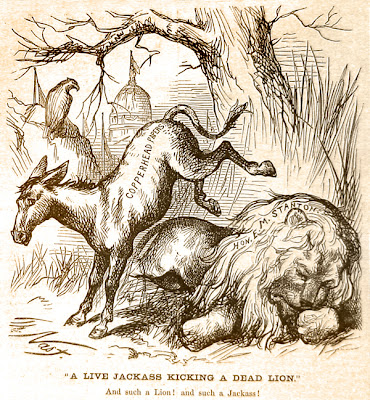 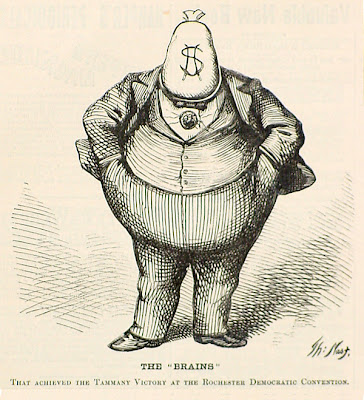 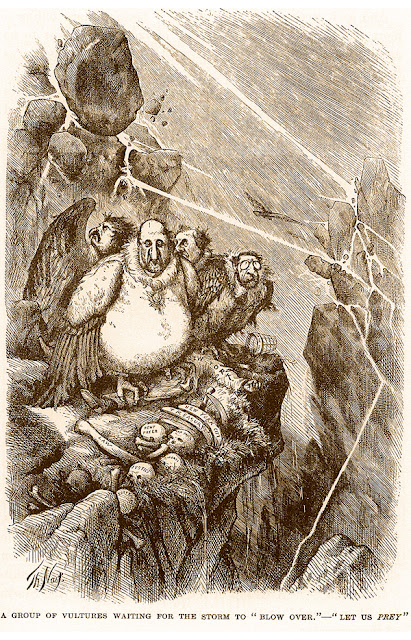 Caricature is oversimplification, a type of dehumanization for speedy communication. It's also a tool of Nast's trade which he vigorously practiced during the 1800s, most notably for Harper's Weekly. For him, party Democrats were stubborn jackasses and murderous tigers. William "Boss" Tweed was a bloated bag of ill-gotten gains and his Tammany Hall cronies were predatory vultures. But some of Nast's lesser known works have been singled out as evidence that he was anti-Catholic and anti-Irish.

And while some of those images have been disseminated in the press, hardly any of Nast's opponents have meaningfully dealt with their content in context. 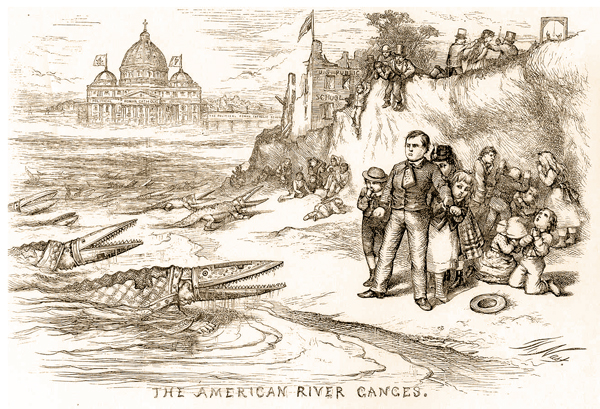 Let's look at one of the supposedly anti-Catholic Nast cartoons. "The American River Ganges" depicts an army of bishops crawling onto our shores. Their miters have transformed into crocodile mouths, as they prepare to devour young children.

As a Catholic… okay, ex-Catholic, I don't see any problem here. "Ganges" isn't anti-Catholic, it's anti-Roman Catholic Church. Briefly stated, Nast was opposing state aid for parochial schools, and calling for church-state separation. And I consider his attack as justified as, for instance, contemporary editorial cartoons that condemn the Church's countless pedophile priest cover-ups. 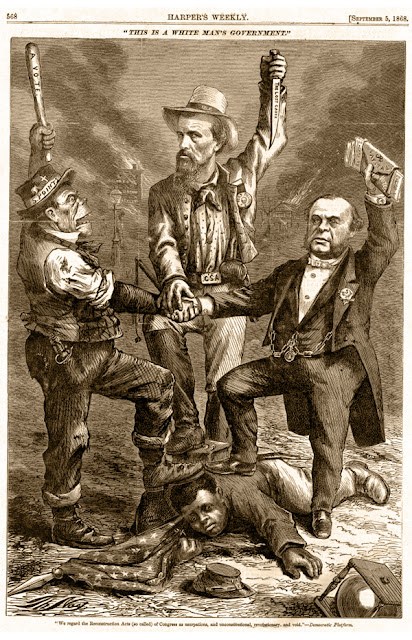 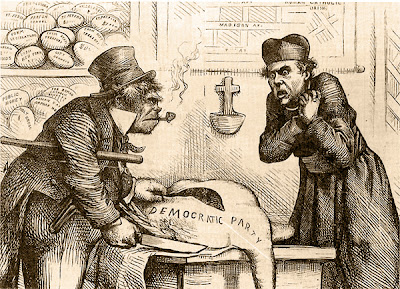 The other cartoons in question – and there are several – portray the Irish as a bunch of drunken, violent apes. As an Irishman, if I saw such stereotypes today, isolated from any explanatory indicators, I'd be highly insulted. But typically, Nast was criticizing specific groups of Irishmen, and for a variety of specific reasons. For one thing, he felt that their majority support of Tweed's corrupt political machine in New York was foolish at best and downright stupid at worst. 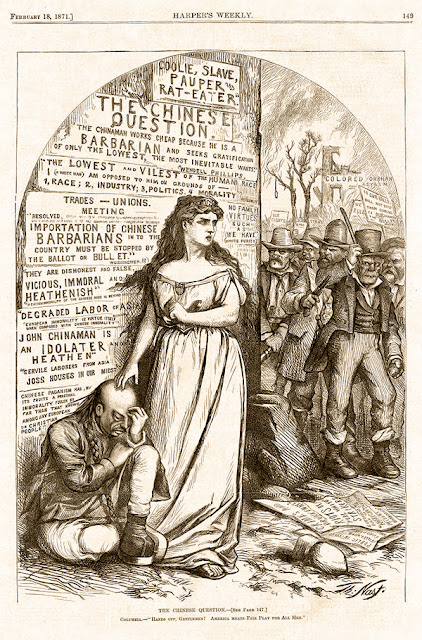 As another example, in "The Chinese Question" he's drawn a noose and a burning building behind an ugly Irishman leading a gang of ruffians. This was to reference the riots in which predominantly Irish American mobs protested President Lincoln's Emancipation Proclamation by lynching blacks and setting fire to a Colored Orphan Asylum. That's not racism on Nast's part, that's rage. 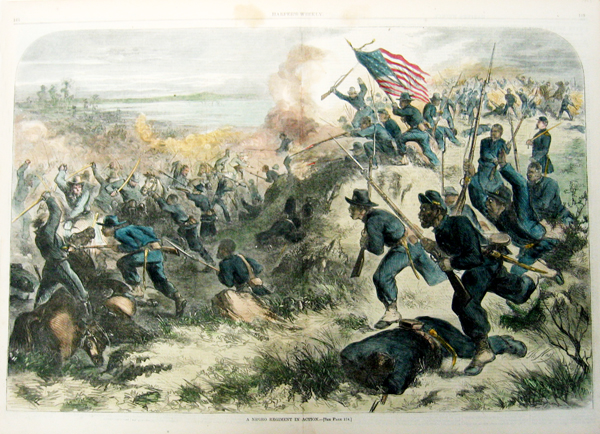 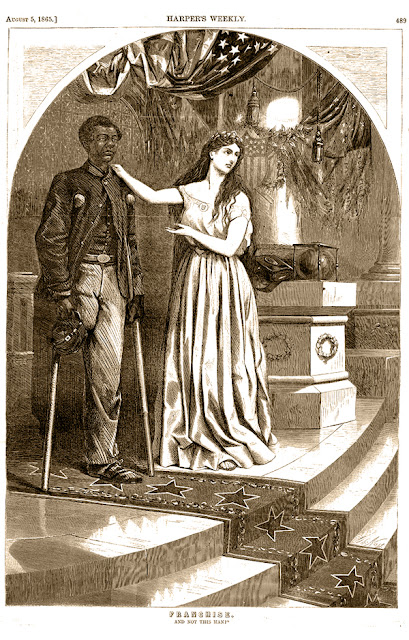 I've expressed my admiration for Nast in the past. And I really don't know the depth of his alleged anti-Irish prejudice. His flattering depiction of an Irishman at his "come one come all, free and equal" table [see image below] is certainly cause for reflection. But I do know about his admiring and highly compelling portrayals of Chinese immigrants and other minorities. And his depictions of blacks, whether courageous Buffalo Soldiers or emancipated slaves, rank among the most exemplary graphic representations of a woefully underacknowledged part of our country's history.

I also know that when many Southern blacks voted for corrupt administrations during post-Civil War Reconstruction, the same way the Irish had been voting for Tammany gangsters, Nast didn't hesitate to savagely ridicule both those groups [see top image]. Totally unacceptable by today's standards, most certainly, but typical of the visual parlance one and a half centuries ago.

And speaking of voting, let's return to New Jersey. When the Hall of Fame winners are announced this month, I seriously doubt Nast will be mentioned, much less inducted. And it's not just that his chances were undermined by negative publicity. It's also that he was competing with names like Alexander Calder, Alfred Stieglitz, Dorothy Parker, Joyce Carol Oates, and even another cartoonist, Charles Addams. Woah!

Nevertheless, as a fellow former resident of New Jersey and a believer in counterbalancing what I feel was unfair treatment, I decided to cast my vote this year for the disrespectful and distinguished Mr. Nast. 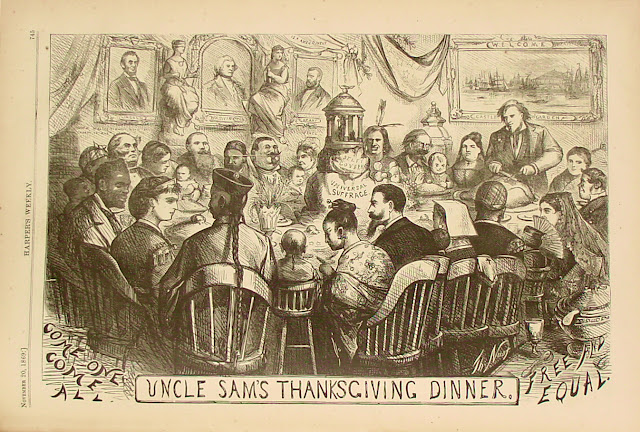 Note the Irish couple at the right end of the table. Click to enlarge.


NAST WON’T BE IN NEW JERSEY HALL OF FAME

Posted by Alan Gardner
January 30, 2012
The Star-Ledger is reporting that for a third straight year, the legendary Thomas Nast will not be inducted into the New Jersey Hall of Fame after a few politicians and the Ancient Order of the Hibernians publicly objected to Nast’s anti-Irish and anti-Catholic views of his day.
From the Star-Ledger:

The main reason Nast went after the Irish, Smith said, was that they were the main supporters of New York City’s Tammany Hall political machine. And he noted that it would be hard to argue that Nast hated the Irish for having spent 20 years in Morristown, sometimes known then as “Little Dublin.”
Assemblyman Wayne DeAngelo (D-Mercer), who protested the nomination, said he’s glad Nast is out. “I would think after three times … you should be excluded from it,” he said. “I don’t know what their policy is.”