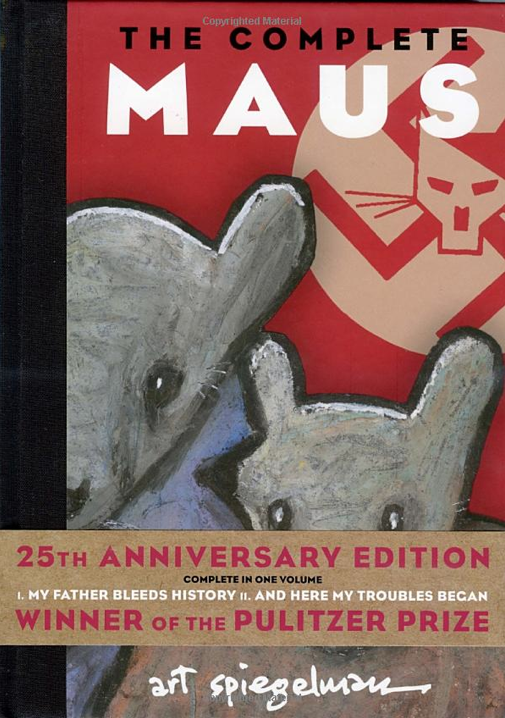 Interesting article by Maya Jagi from Newsweek:
Twenty-five years after ‘Maus’ put graphic novels on the map, the art form is exploding.


Stars from the world of comics and bande dessinée— the Franco-Belgian strip cartoons that spawned the likes of Tintin and Asterix—mingled this past October at a gathering at London’s French Institute. What’s the difference, Newsweek asked, in how their art is perceived in French-speaking countries versus Britain and the U.S.? “Respect,” one English cartoonist shot back.

Bande dessinée (BD) has a long pedigree (the French call it the “ninth art”) while Japan’s homegrown version, manga, is dignified with the name given to fine-art sketches. But transatlantic snobbery can still trivialize comics as the preserve of an all-male subculture obsessed with spandex-clad superheroes. Yet Maus: A Survivor’s Tale, Art Spiegelman’s anthropomorphic memoir about his father, a Holocaust survivor, started a revolution in respect for comics a quarter century ago. A long graphic novel for adults involving Jewish mice and Nazi cats, Maus’s layered exploration of history and memory kicked down doors to nonspecialist bookshops, libraries, and universities, and won a Pulitzer Prize. Since then, critical opinion has scrambled to keep pace with an explosion of creativity among cartoonists. Graphic novels have been winning global acclaim—and they’re becoming a crucial artistic medium for memoir, fiction, history, biography, and stories that put a face on social change, in cultures from Canada to Iran.

This fall saw the publication in 12 countries of Zahra’s Paradise, a graphic novel narrated by a blogger, in which a mother searches for her son in the violent aftermath of Iran’s disputed 2009 elections. Created by Iranian-American journalist Amir and artist Khalil (their surnames are being withheld for safety reasons), it was first serialized for a transnational readership as a free, multilingual web comic. Before the third chapter was online, the book had been sold into nearly a dozen languages, turning a profit for its publishers, First Second Books in New York.

Zahra’s Paradise joins a cluster of new graphic books out this fall. Habibi by Chris Thompson (the American author of Blankets, an award-winning 2003 graphic novel about growing up in an Evangelical Christian family) is a love story revealing common ground between Christianity and Islam through lavish, black-and-white drawings partly inspired by Arabic calligraphy. Billy, Me & You, by British first-time author Nicola Streeten, chronicles family grief at the death of a child. Inspired by BD, yet breaking the comics mold, is Bye-Bye Babylon, a graphic memoir by Paris-based painter Lamia Ziadé of growing up in 1970s Beirut. Text and drawings are separate, as childhood treats give way to guns in a compelling inventory of civil-war memories.

Graphic novels have won acclaim as an innovative medium for exploring issues such as Iranian politics, the Holocaust, and turmoil in the Middle East.

1001 Comics You Must Read Before You Die, also out this fall, spans almost two centuries, yet half the entries were published after 1990. Its editor, Paul Gravett, says that after decades of being “stuck in genres and formulae,” comics have broken free. Successes stretch from dark revisionist superheroes, as in Alan Moore’s V for Vendetta (1982), to Logicomix (2009), which traces philosopher Bertrand Russell’s quest for mathematical truth, by a Greek team led by Apostolos Doxiadis. A surprise bestseller, it has been a hit in 25 countries. While conventional superhero sales have plummeted—partly with the rise of cinematic CGI and computer games—many more women are reading and creating graphic novels. Memoir is thriving with the rise of graphic auteurs who both draw and write. Persepolis (2000), Marjane Satrapi’s memoir of growing up after Iran’s 1979 Islamic revolution, was a seminal success and a hit film.

In MetaMaus, Spiegelman’s new companion to The Complete Maus, he defines comics as a “narrative series of cartoons” that “boil down everything to its essence.” The panels are like “stained-glass windows in a church,” telling a story through time. Bastien Vivès, a Parisian feted for gracefully laconic graphic novels such as this year’s swimming-pool romance A Taste of Chlorine, said at the French Institute: “The trap is to fall in love with your pictures. You have to move very quickly, edit firmly, and think about what you want to say.” Gravett sees comics as akin to handwriting, “a very intimate, personal form, and a powerful way of synthesizing thoughts on paper. When we draw and write in an interacting flow, it taps into the unconscious—not so different from art therapy.”

Graphic novels can “take 15 years, working every day,” says Dan Franklin, publishing director of Jonathan Cape—the first U.K. literary imprint to champion them. He remarks on an “illness subgenre,” with memoirs such as David B’s Epileptic (1996), Marisa Acocella Marchetto’s Cancer Vixen (2006), and Sarah Levitt’s new comic Tangles, on the Canadian author’s relationship with a mother who has Alzheimer’s. Cape has published six to eight graphic novels a year since Raymond Briggs’s 1998 memoir of his parents, Ethel and Ernest. Though few match its 400,000 sales, the form is profitable thanks to “tiny advances,” steady sales and—crucially since the 1990s—cheap color printing in East Asia and India.

The artistic possibilities are inspiring. American author Dave Eggers once wrote of the graphic novel as literary fiction’s “mutant sister” that can “often do everything fiction can, and, just as often, more.” Audrey Niffenegger, bestselling Chicago author of the (nongraphic) novel The Time Traveler’s Wife, trained as a visual artist, and does both prose and “visual novels.” “Words can move you through time and name things,” she says. “Pictures are concrete and more precise. There’s a division of labor; when you put them together, you get everything.” What comics can do with time, place, and perspective excites storytellers. Doxiadis describes Logicomix as a “300-page comic book of philosophers talking.”

A novelist and mathematician, he enthused that “in comics you can jump in time, from world to world, point of view to point of view. In a novel, it would pass as high modernism, or frustrate the reader.” If graphic novels are a cross between movies and novels, then Logicomix is more like theater, because “cinema has a lower tolerance for ideas and issues.”

Documentary detail is crucial for Joe Sacco, American originator of war-reportage comics on Palestine and Bosnia. Comics can go “seamlessly” back in time, and build atmosphere, he says. The reader is “situated right away in a particular time and place. The multiple panels can repeat background imagery, which allows the visual look of a refugee camp or a bombed-out town to seep into the reader’s consciousness.” In his comics, Sacco caricatures himself. So, while emotions can be sketched in the tilt of an eyebrow, complex postmodern ideas about authorship and objectivity can be conveyed with a lightness of touch that filmmakers and fiction writers might envy.

Are comics useful in confronting violence and horror? Spiegelman, who used cats and mice to illustrate oppression, believes animal masks allowed him to approach “otherwise unsayable things.” Films or photos of physical suffering can be tough to take in. “Watching a clip of a man in South Africa being ‘necklaced’ is excruciating,” Sacco says. “Drawings are a filter that allows us to dwell on such moments. They refract the hideousness of an atrocity just enough that they allow us to look.” If a comic can serve as the mediating mask of tragedy, that might help explain why graphic novels are proving so successful in depicting not only torture and war but illness, domestic conflict, even teenage trauma—anything hard to face in the raw. Comics can morph directly from realism to expressionist fantasy—from a prison cell or hospital bed, to the turmoil inside someone’s head.

Comics have a tradition of underground dissent. But in times of social upheaval, they can react with the speed of news reports, while harnessing the power of the image, as poster art does, to move and to mobilize. For the writer of Zahra’s Paradise, the graphic novel is the “ultimate democratic medium—the cheapest, fastest, and most accessible way to tell the story.” California-based Amir left Iran as a child after the 1979 revolution. Presented as “real-time historical fiction,” the novel was a “composite of stories and images of protest” in the aftermath of President Ahmadinejad’s reelection, Amir says. It became the “perfect medium for resisting the Islamic Republic’s distortions,” and a “safe virtual space” in which survivors could relive trauma. In an age of instantaneous images, Khalil adds, the graphic novel bridges the “needs for both the verbal and the visual, especially in volatile situations that are hard to capture in depth.” Interactivity is key. “Our readers were not passive consumers of news but active participants in a global movement for human rights,” Amir says.

That today’s dictatorships regard comics as a threat was apparent when Hosni Mubarak’s regime banned Egypt’s first graphic novel, Magdy El Shafee’s Metro (2008)—to be published in the U.S. next spring. Egypt has seen an upsurge in comics, arguably on the same wave of revolutionary energy that fueled the Arab Spring. TokTok magazine, devoted entirely to comic strips, started in January, weeks before Mubarak was toppled. As more people grasp comics’ twin potential for art and activism, there are signs that graphic books are finding a place alongside blogs and Facebook, texts and tweets, in the arsenal of revolution.

Maya Jaggi is an award-winning cultural journalist and critic in London, whose writing extends from international literature to travel. A writer of major arts profiles for the Guardian Review for more than a decade, she writes for several British and international newspapers, including the Independent, Financial Times and Economist, and contributes to BBC radio. She was educated at Oxford University and the London School of Economics, and has reported from five continents, interviewing subjects from Gunter Grass to Oprah Winfrey.