Aislin: Trudeau, Justin and I

From The Gazette archives, Terry Mosher (Aislin) takes us on a historical ride with both Trudeau father and son. 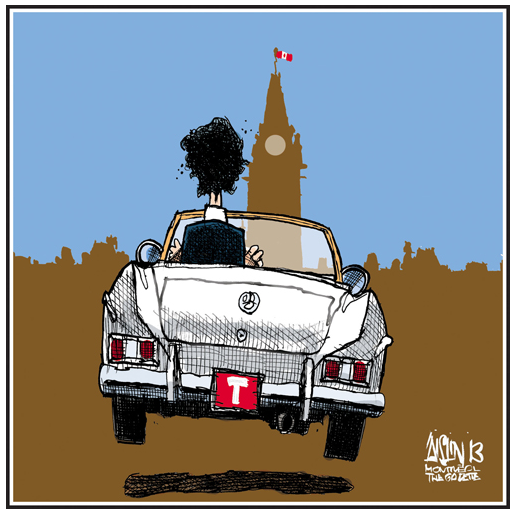 Pierre Trudeau once famously said: “Just watch me.” So I did – along with every other Canadian. Now we’re doing the same with his son, Justin, who clearly enjoys being watched.

The question for a cartoonist becomes: could Justin ever possibly provide us with as interesting material as his father did – and for as long?

Although I have come to know Justin Trudeau personally, I only knew his father at a distance. Indeed, the first time we actually spoke was in the mid-1980s at one of those meet-the-author events. Pierre and I had a brief chat about – get this! – the bestsketch books available. (Apparently his sons were showing an interest in drawing.) Thankfully, unlike many other politicians I’ve encountered, he didn’t want to talk about what I had or hadn’t done with his chin.

In the mid-1960s, Gérard Pelletier, Pierre Trudeau and Jean Marchand were enticed to go to Ottawa by then-prime minister Lester Pearson. The idea was to give Quebec a more credible face in the federal government. The trio became known as “the three wise men.”

I started drawing political cartoons for the Montreal Star in 1967, shortly before Pierre Trudeau became prime minister in the spring of 1968. In the first flush of Trudeaumania, other cartoonists often drew him as an aging flower child. I took a different approach, portraying him as a very determined and calculating character. A case in point is this cover I drew for Time magazine: Trudeau is holding Canada together, but a Canada whose mouth he has sewn shut.

My suspicion that Pierre Trudeau was a more resolute character than was commonly believed was borne out during the FLQ crisis in October 1970. Trudeau was accused of many things, but never of being a fool. Quickly grasping the significance of the pandemonium taking place in Montreal, he declared the War Measures Act. Despite the ever-present rose in his lapel, he was never again depicted as some hippie flower child. Here’s a cartoon I drew at that time, entitled Captain Canada.

In the early Trudeau years, the leader of the opposition was Robert Stanfield, a competent and generally well-liked politician who was not crafty enough to beat Trudeau over three successive elections. I drew this cartoon of Trudeau and Stanfield as a dancing couple for the cover of a 1972 election handbook produced by Maclean’s magazine. Note the positioning of the knees.

Despite his consecutive election wins, campaigning across the country was never one of Trudeau’s favourite activities. He was not a populist by nature, as is shown in this cartoon drawn during the 1974 election.

In April 1971, Pierre Trudeau married Margaret Sinclair in storybook fashion. Just a few years later, storm clouds rolled in when Margaret went off to Toronto to hang out with the touring Rolling Stones. I drew a cartoon of the new opposition leader, Joe Clark, sitting at the breakfast table with his wife, Maureen McTeer. Maureen is wondering how the press would react if she were to suddenly run off to Regina – with Tommy Hunter.

I am often asked as a political cartoonist whether there are elements of a subject’s life that are out of bounds. My own rule of thumb is that a politician’s personal life is of no interest for me unless it begins to have an effect on his or her public performance. Even then, the issue has to be handled carefully. The Trudeau marriage disintegrated. Several years later, I drew Trudeau asking testily which damned Margaret was on the phone: Trudeau or Thatcher?

Joe Clark and the Tories were elected to run the country in June 1979. Bungling a non-confidence vote on his first budget, Clark was forced to call another election, which he lost, having served just 272 days as prime minister. Trudeau and his Liberals were swept back into power in imperial fashion, inspiring this cartoon that appeared in The Gazette the morning after the 1980 election. It was as though Trudeau had just stepped out for an evening’s entertainment.

Pierre Trudeau won that 1980 election by keeping a detached and calculated distance from the Canadian public, as shown in this cartoon. (Interestingly, Trudeau bought the original of this piece and gave away signed copies to all his key campaign workers.)

The particular significance of Trudeau having regained power when he did was that he was around to play a role in Quebec’s 1980 sovereignty referendum – a bit of serendipity for Canada, as it turned out. There are those who believe that if Joe Clark – seemingly always anxious to placate Quebec – had still been prime minister, the crafty Parti Québécois Premier René Lévesque would have prevailed. Instead, Lévesque had to deal with Trudeau, leading to this cartoon. It appeared on the front page of The Gazette the morning after Lévesque’s referendum loss.

Next to his successful battle against Quebec separation, Pierre Trudeau will probably be remembered most for having repatriated the constitution from Great Britain. There was a great deal of politicking involved.

But Trudeau prevailed and Canada had its constitution â€“ even if not everyone was happy about the outcome.

In 1984, when Trudeau finally resigned for good, I drew this cartoon of him, twisting Richard Nixon’s quotation about the press not having him to kick around anymore.

Pierre Trudeau once told Mordecai Richler in confidence that if Canadians had any idea how much money his government was funneling to Quebec, they’d probably ride him out of Ottawa on a rail. This might explain why this was Trudeau’s favourite political cartoon, according to his good friend Stratton Stevens. The cartoon is entitled Put Up and Shut Up!

The day Pierre Trudeau died I was in my studio, puzzling over an appropriate cartoon. A single rose was, of course, a possibility. But my sense was that this would be an overworked image that most would be using in one form or another in the next day’s newspapers. My wife, Mary Hughson, who worked at The Gazette at that time as a graphic designer, walked into my office. “I see him paddling off in a canoe,” she said sadly – which immediately led to this cartoon.
Justin Trudeau was so moved by the cartoon that he asked for, and received, the original – plus 50 copies to be distributed as a thank-you to close friends of his father.

Here’s one final thought: As a political cartoonist, I always have to look beyond the supposed rules of physiognomy that often determine how human beings react and engage with each other. Some might be surprised to know that, on the surface, Pierre Trudeau was a short fellow with a receding hairline and a weak chin. And yet with a simple glance he could stop gorgeous and sophisticated Montreal women in their tracks. The power shone through his physical appearance. The trick was to capture Trudeau’s confidence, intelligence, arrogance, and even that charming shyness that sometimes came through. There is no question that Justin Trudeau has his father’s flamboyant, sometimes calculating, moves.

Despite the predictable chattering nay-sayers in the media, the younger Trudeau has now proved that he has the necessary political smarts by handily winning the Liberal leadership.