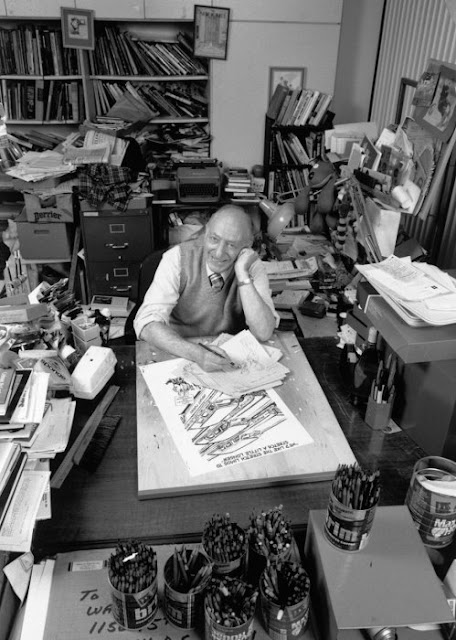 The new documentary Herblock: The Black & White shows how one editorial caricaturist's ideals persisted over the decades—and still matter today.

"Stop them damn pictures." That was how infamous 19th-century Tammany Hall boss William M. Tweed responded to the Thomas Nast caricatures that contributed to his downfall. Joseph McCarthy might have voiced similar anxieties about editorial cartoonist Herblock's four-year satiric visual pounding of Wisconsin's anti-Communist junior senator. As a lifelong critic of folly and injustice, Herblock's Washington Post editorial-page cartoons, which showed a sneering, stubble-faced McCarthy, were among the few public expressions against his rampant demagoguery. Yet McCarthy wasn't his only bete noir. Herblock—a.k.a. Herbert Block, who died in 2001—gave critical and concrete form to the atomic and hydrogen bombs, rendering these specters with facial features (similar to McCarthy's, as a matter of fact) as gods of destruction. These drawings scared the bejeezus out of those of us who came of age in the atomic age.

A new documentary, Herblock: The Black & The White, executive produced by George Stevens Jr., produced and directed by his son, Michael Stevens, and co-written by Stevens and Sara Lukinson, will premiere at the Tribeca Film Festival today. For the elder Stevens, who lived through the McCarthy hearings, Herblock was a hero and friend. For the younger, who met the artist when he was in high school, the story of Herblock's life, what he stood for, and how he came to create so many indelible icons of the cold war, civil rights and Vietnam eras, was "worth telling."

Michael Stevens was a product of the Reagan '80s. "I was alone in my liberal thinking at the all-boys prep school I went to outside of Washington," he told me, "so Herblock was a private pleasure for me, or an opportunity to point to it and offer to my friends—and Reagan supporters—'Maybe one day you might see the world like this guy does.' I doubt I made a dent. But by some time after college, most of my buddies had came around."

Sara Lukinson has worked with the Stevens family on other film projects. When asked to write and conduct interviews for this one, she became awed by Herblock's accomplishments. "He didn't have any self-promotion in him; his cartoons were his voice and his life, and spoke for him," she told me. "He seemed to enjoy his life, living very privately and avoiding the hullaballoo—and dress code—of the social circuit. And he laughed a lot. He was both certain and modest. What's not to like?"

The title of the film, The Black & White, refers to Herblock's no-holds-barred commentaries, literally in black and white crayon. "My suspicion is that he would ridicule this 'fair and balanced' dogma that surrounds journalism today," Stevens said. "From spending time with all of his writings and those who knew him, he most likely would say: 'Being fair and balanced is not a journalist's job. It's to report the truth.'"

Herblock followed his instincts, whatever the consequences. "He stood up, often first and loudest, against very dangerous men and tides of history. A lot of people wished he'd go away," Lukinson said. "In the film Good Night and Good Luck, there is a throwaway line, someone says, 'Can we get anything on Herblock?' but it was said so softly, you could barely hear the line. We have audio in our film of something Nixon said about him, but Herblock was never targeted, say the way [Daniel] Ellsberg was."

In his slugfest with McCarthy, however, Herblock took an incredible risk, given how powerful the junior senator was. "Interviewee after interviewee said again and again that no one was on the McCarthy case before Herblock—and that it was indeed, a monumental act of courage to be out there alone in that environment," Stevens said. "Herblock had cartoons on the fear and scare tactics in Washington going back as far as 1948. He then coined the term 'McCarthyism' in 1950. And Edward R. Murrow's famous 'See It Now' [exposing McCarthy] was not broadcast until 1954."


With newspapers on the wane, the documentary reveals how important cartoonist-journalists like Herblock are to the democratic system. "It was a real re-education for me on the vital role that the press has to play in keeping our politicians honest," Stevens said, "and to do what government should be doing—watching out for the little guy." Not incidentally, among the talking heads, Jon Stewart and Lewis Black pay homage to Herblock as their antecedent. "Shakespeare showed us it's often the court jester or fool who gets to say the truth," Lukinson said. "Although as someone says in our film, even court jesters were, at times, beheaded."

Herblock had an atypical relationship with the Washington Post's editorial page. Most editorial cartoonists followed the dictates of their host newspaper, but not him. "There's a famous story," Stevens related, "which we researched to be 100 percent true, that Philip Graham, the publisher of the Post asked Herblock in the fall of 1952 not to create such unflattering cartoons about Eisenhower. Herblock felt Stevenson was the better presidential candidate. Herb continued, however, and Graham came to him one day and said he was going to have to pull his cartoons when they went against Eisenhower—and therefore against the Post's editorial opinion. Herblock said he understood—it was Graham's right—but he reminded Graham that his cartoons would still go out to almost 1,000 other papers in the country via syndication. Shortly, the Washington Daily News put up an article, 'Where's Mr. Block?' A publicity scrum followed, and the reaction was so strong, that Herblock was put back in the paper. More importantly, his right at the Post to publish his own opinion was never again questioned."

Stories like this abound, but shoehorning an entire life into a film is a challenge, so the producers opted to forgo giving the audience a history lesson. "Structure is what makes documentaries soar, or crash and burn," Stevens explained. "We concluded, then, that it had to be a story about a man with his decent, timeless ideals—and how he took on the mightiest of public figures with his pen every working day of the week. His opposition included Hitler, McCarthy, Presidents Johnson, Nixon, Reagan, and Clinton—not to mention the gun lobby and tobacco lobby, and just about any other lobby which put its financial interests ahead of the little guy."

Stevens hopes viewers will ask of themselves what Herblock asked of his audiences: "to play a role in our democracy, because if one doesn't—if one's voice is not heard—there are plenty of people out there who have powerful voices who are willing to manipulate the democracy for their own financial gain, while doing it at our expense." Lukinson looks forward to the audience feeling they would have liked to have known Herblock and that his name will be around for a long time to come. "He is a real touchstone," she said, "not just to journalists and satirists, but to all of us Americans, to anyone who believes there is a common good."
Published by Bado at 4:00 AM