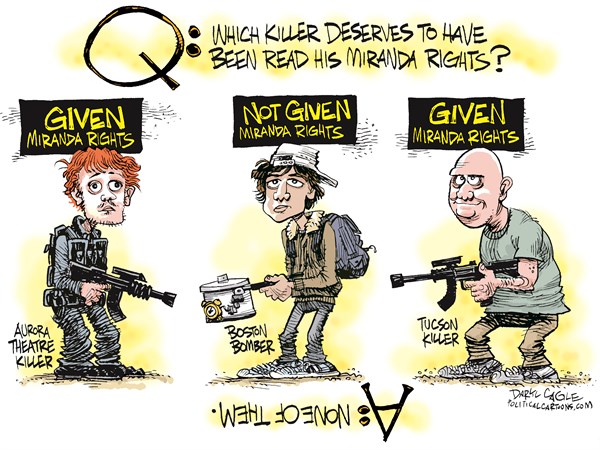 I’m a busy guy... but every now and then an existential threat presents itself that requires you to stop whatever you’re doing and respond.

Daryl Cagle is an existential threat, the Osama bin Laden of American editorial cartooning. His relentless quest to squeeze every cent out of the industry keeps leading him to new lows: aggregating cartoons into huge packages in which the cartoonists make pennies but he’s a multimillionaire (like Arianna!), repurposing editorial cartoons over and over to save time, encouraging the worst ethical practices, including undercutting already rock-bottom reprint rates, censoring comments posted by fellow political cartoonists who disagree with him from online forums, and of course plagiarism.

Most cartoonists can only sell to one ideological market. For example, I don’t get much traction with conservative papers. Mike Ramirez, the right-wing cartoonist, can’t sell to many liberal papers. But Daryl has come up with “Cartooning-by-Numbers.” That’s right: he sells the same exact cartoon to BOTH liberal and conservative papers! All he has to do is change a minor detail.

Above is the cartoon he released yesterday. This is very, very, far-right stuff. After all, the whole point of Miranda Rights is that they’re a right. They’re not called the Miranda Privileges. Everyone gets them. Including accused mass murderers.

At the same exact time, Daryl released this ACLU-friendly version of the same cartoon: 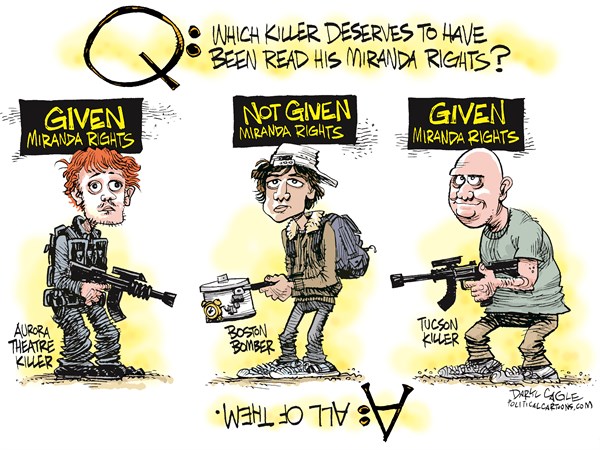 Daryl isn’t a good cartoonist, and does not have the respect of his colleagues, yet he is an extremely powerful man in the profession. This is because his aggregated syndication package, Cagle Cartoons, is so cheap that it is sold to about 800 newspapers (out of 1400 total) in the United States, and also overseas. His blog, which encourages cartoonists to self-plagiarize, is widely read by younger cartoonists and very influential. So this sort of thing could easily catch on. After all, who wouldn’t want to double their marketshare with a few strokes of Photoshop?

Fortunately, the Association of American Editorial Cartoonists (AAEC) will consider taking a stand against this sort of thing at its annual convention in Salt Lake City in June. A strong code of ethics will be discussed and possibly enacted. In the meantime, however, we are seeing cartooning at the precipice of disaster, commodifying a once-proud profession dedicated to political ideas into a meaningless pile of plug-in-your-own-beliefs garbage.

Ann Telnaes: “This is a clear case of a cartoon syndicate trying to maximize profits by offering the same artwork but changing a few words to address both ideological sides of an issue. An editorial cartoon is supposed to have a clear point of view.”


I think that as our profession has fallen on hard times, and I am perceived to be successful while other editorial cartoonists suffer, that some troubled editorial cartoonists look for any opportunity to bash the evil, cartoonist businessman. I suppose that is to be expected.
You can see my explanation in real time as I posted the cartoons on my Facebook page.
I got such a strong reaction from readers against the first version of the cartoon, with many well reasoned arguments, that I changed my mind – something that doesn’t happen much in this profession. So I posted a revised version of the cartoon. I learned that Tsarnaev was given his Miranda rights shortly before I posted the revised cartoon, so I doubt that the second cartoon got much ink.
The accusation by cartoonists that I posted two versions for marketing purposes, to get the cartoon reprinted by both conservative and liberal papers, is just silly. Some cartoonists are describing this is an insidious, ongoing business plan.
I’ve changed my mind before, not often, and usually over a longer period of time, but I won’t go back into the archive to delete the old cartoons. I posted them, I should live with my history. So both cartoons are up. My old cartoons supporting the run up to war in Iraq are still posted too – I’m more embarrassed by those.
I remember when the Miranda decision came down in the 1960′s, on a 5-4 vote. It was controversial for a long time; the only area of the law where “ignorance of the law is no excuse” didn’t hold true. I got a large enough sampling of e-mails in response to the cartoon (and you can see from the Facebook comments as well) that I realized the Miranda decision no longer seems to be controversial – it has become a part of our national fabric. Most of the responses conflate reading the Miranda warning to the suspect with the suspect’s overall civil rights; I’ve come to the conclusion that this is a good thing.