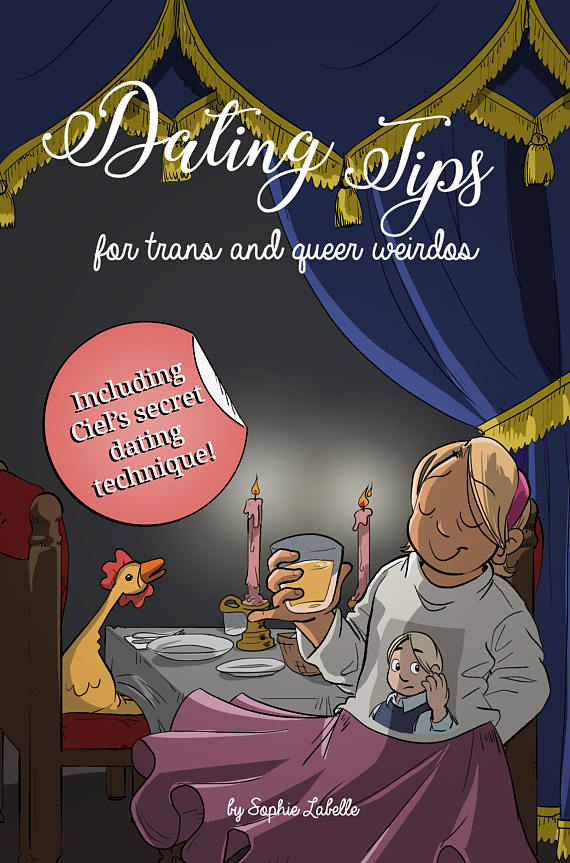 Cartoonist Sophie Labelle has achieved a degree of fame with her webcomic Assigned Male, the serialized story of a male-to-female transgender girl named Stephie and her daily life negotiating gender issues in modern-day Montreal.

Like many others, though, Labelle has been forced to deal with one of the dark flip sides of online success: cyberbullying.

The usual level of hostility aimed her way — “a couple of dozen threats per day” in her estimation — went to another level last week, with thousands of death threats in a matter of days. It reached the point where an event planned for last Wednesday at Halifax bookstore Venus Envy to launch her book Dating Tips for Trans and Queer Weirdos had to be cancelled, and Labelle felt it necessary to go into hiding.

“This kind of thing happens to any trans person who’s visible and trying to raise awareness of trans issues,” Labelle, 29, said by phone from an undisclosed location on Friday. “In this case, the organizers had received threats that people would come and disrupt the event, so we decided to be on the safe side.”

Something used with particular virulence against Labelle has been the practice of doxxing. One of those cyberspeak words that is rapidly entering the general vernacular, it refers, in Labelle’s words, to “having personal information leaked with the purpose of undermining somebody. In the past I have exposed some of the groups that have been posting threats on my Facebook page, and Facebook has deleted most of them, and I think that’s what made it escalate to the point where they doxxed me and published my home address. They hacked into my website to get that information.”

Tracing the attackers, as Labelle and countless other victims have found, is no simple matter. “Most of them aren’t in Canada; they’re from other countries, which makes it really hard to get the authorities on side. And they’re doing it as a hobby, so they know how to protect their identities — they use fake names, fake photos.”

Labelle has been subject to online harassment ever since Assigned Male began gathering a following in 2014, but she has noticed a general uptick in recent months.

“It definitely got worse after the American election, which emboldened radical alt-right groups,” she said. “There’s a lot of neo-Nazi imagery, and that has a lot to do with the eugenics aspect — the idea that the human race must be made more pure, and part of that involves killing trans people. Transphobia works hand in hand with the whole Nazi propaganda of racism and anti-Semitism.”

While Labelle was “too overwhelmed” in recent days to spend time seeking legal recourse, it’s not an option that appeals to her much anyway.

“Traditionally — and I’ve experienced this — police forces have often shown more transphobia than actual (desire to) help. It’s always very hard for trans communities to get actual help in these cases.”

Help for Labelle has come from other quarters.

Her Facebook page, removed during the worst of the attacks, is now back online, and supporters around the world have rallied to her side.

Attacks, she said, will likely soon go back to the regular level of a couple of dozen per day, and she hopes to reschedule the Halifax launch, and to get back into her routine of posting new Assigned Male instalments. Meanwhile, she said, she will continue to keep a low profile for the foreseeable future.

“They’re already planning their next attack, I’m sure,” she said of the bullies. “But I’m jaded, I guess. It’s been part of my daily life long enough that I can get over it. At this level, though, I’m not taking any chances. Death threats, even if they’re just jokes, should never be taken lightly.”

ianmcgillis2@gmail.com
Published by Bado at 12:00 AM