From The Detroit News. 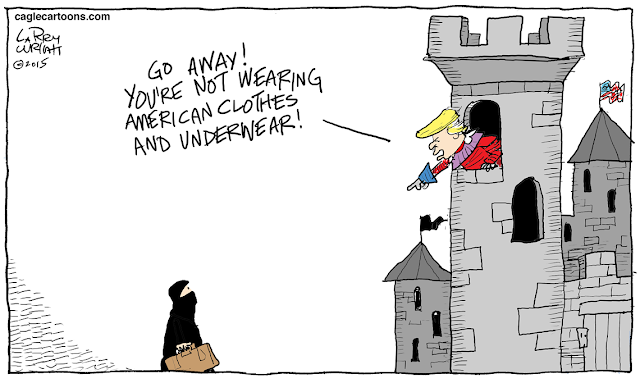 During a 45-year span that began with the Detroit Free Press and spanned more than three decades at The Detroit News, Mr. Wright was known nationally for his comic strips “Wright Angles” and “Kit ‘N’ Carlyle,” as well as for editorial-page cartoons that neatly caricatured the haughty and the hypocritical.

He drew images, people — and cats — marvelously. He had a playful wit. And his wide range of interests matched his intellect, all of which made a longtime cartoonist professionally unique and personally indispensable.

“Larry had this old-fashioned notion that to be funny and make a point, you didn’t have to be mean or over the top,” said Tom Bray, former editorial page editor for The News. “Instead, in his editorial cartoons, he relied on a sly sense of humor to underscore the absurdities, pomposities and human frailties to which we all fall prey.”

During an Army stint on Okinawa, where he met his wife of 55 years, Naoko, Mr. Wright began in 1960 drawing political cartoons for the Morning Star, a civilian-owned English-language daily. He later joined the newspaper as a full-time editorial-page cartoonist and night news editor after receiving his Army discharge.

In 1965, he returned to Detroit to join the Free Press news desk.

“I conned my way into a daily political cartoon on the Free Press Feature Page,” he wrote in an autobiography for the American Association of Editorial Cartoonists. “And in 1976, The Detroit News offered me a position as a full-time cartoonist.”

At The News, in addition to continuing with editorial-page lampoons, he developed his national strips. “Wright Angles” was a hilarious depiction of daily family life, which included as a central figure the household cat, Motley. Wright over the years turned an oversized, full-of-himself feline into a devilish comic.

“Kit ‘N’ Carlyle” continued the feline theme, a Wright trademark, which gave way in the mid-1980s to a national book: “Celebrity Cats,” in which high-profile people’s cats became animal likenesses of their famous owners.

Mr. Wright would craft his drawings in a third-floor office at the old News building, classical music playing in the background, sipping on a tobacco pipe.

Away from the office, he had passions equal to cartoon art. He was a zealous golfer, and once had a hole-in-one at a favorite track, Carleton Glen Golf Club. He was a Detroit Tigers devotee as well as a slow-pitch softball pitcher and manager of The News team.

He was known within a small circle, nationally, for another of his distinctions and passions: model railroads. In his basement, over many years, he built to uncanny scale and detail great railroad landscapes that traversed hills, bridges and towns, all flavored by a 1930s motif he etched with the fine strokes that made his cartoons so artistic.

“He won many awards for his train layouts,” said Mr. Wright’s son, Bob, who remembers that when model-train aficionados had national or regional meetings in the Detroit area, the Wright basement became a showplace.

“He’d open up the house to them,” his son said. “He just loved that, when people would see his work and be so joyed by it.”

In 1995, as the internet age dawned, Mr. Wright was named associate creative director of The News website. He continued to etch three editorial-page cartoons each week.

“Probably nobody else in the news business ever had Larry’s skill set,” said Pam Shermeyer, The News’ multimedia and online editor. “He was a fine word editor in addition to being a cartoonist, and late in his career he learned to write code for the website.”

In addition to his wife and son, Mr. Wright is survived by daughter Sheryl Boye; four grandchildren; and a sister. A brother, Richard Wright, who also worked at The News, predeceased him.

I am very proud to own this original Wright cartoon: 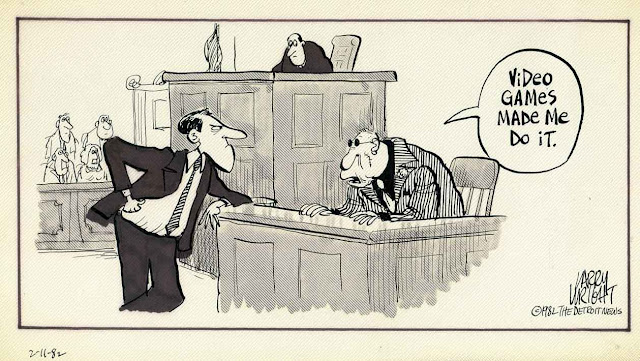