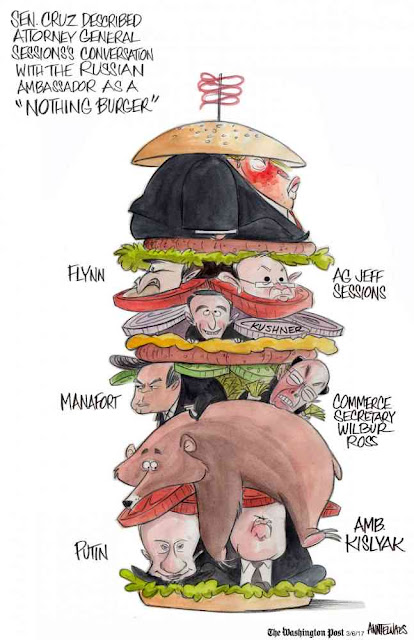 The recipient of the profession’s highest honor, the Reuben Award for Outstanding Cartoonist of the Year is chosen by a secret ballot of NCS members and was awarded this year to editorial cartoonist Ann Telnaes for her unmatched cartoon coverage of the 2016 election and ensuing Trump Administration.

She is the current President of the Association of American Editorial Cartoonists.

A former animator, Telnaes’ cartoons are easily recognizable for their fluid lines and bright colors. Her cartoons tend to be quite liberal in tone and have a special focus on women’s issues, such as third world pregnancy and abortion rights. In 2001, she became the second female cartoonist to win the Pulitzer Prize for editorial cartooning.

She is syndicated with Cartoonists and Writers Syndicate/New York Times Syndicate, with her work appearing across the United States in such publications as The Washington Post, The Boston Globe, the Chicago Tribune, the Los Angeles Times, Newsday, and the Austin American-Statesman; and internationally in Le Monde and Courier International.

Her animated editorial cartoons are featured on The Washington Post’s website.

GAG CARTOONIST
Recipient: Will McPhail
Best Gag Cartoonist went to Will McPhail for his work in The New Yorker.
Published by Bado at 12:00 AM