The First Amendment right to free speech is no laughing matter, as illustrated by a new exhibit at the world’s largest cartoon library. 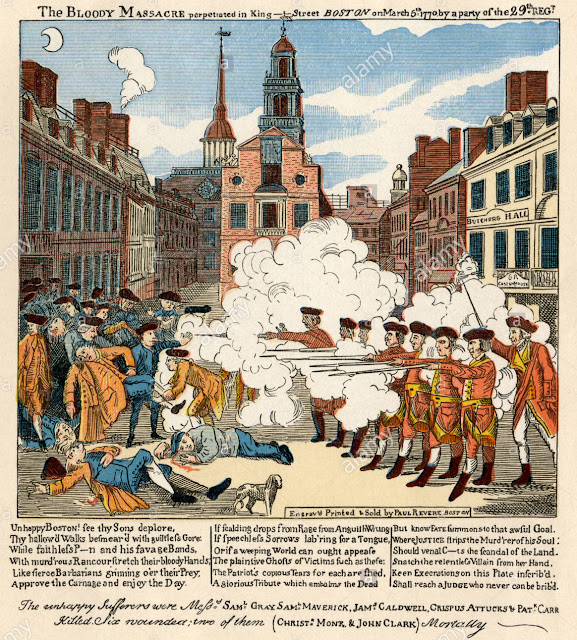 The political cartooning display runs the gamut from a 1774 etching by Paul Revere criticizing Britain’s use of tea as a political weapon to a 2018 cartoon lampooning the blocking of online conservative commentary.

The exhibit combines drawings contributed by several dozen cartoonists with material from the library’s own collection.

Many are from newspapers, but offerings include cartoons from The New Yorker magazine and even ones that first appeared online, on websites such as Politico.

Among cartoons on display:

— “Get up Kaepernick!! Men died for your right to stand!” protesters shout at former NFL quarterback Colin Kaepernick, highlighting his decision to kneel during the national anthem to protest racial injustice, in a 2016 cartoon by Ed Hall for Artizans Syndicate. 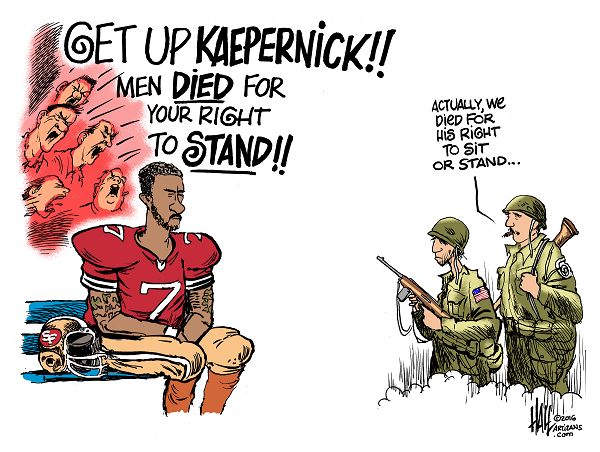 — Angelo Lopez sums up the trend of people walling themselves off from alternative viewpoints in a 2017 cartoon that appeared on the site Cartoon Movement, in which a bound and gagged Uncle Sam listens as protesters shout, “My opinions only!” and “Free speech for those I agree with!” 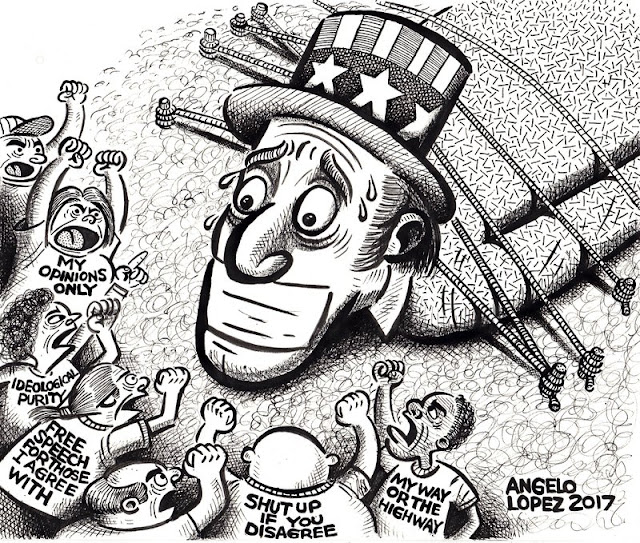 — A 1989 Baltimore Sun cartoon by Kevin Kallaugher featuring a superhero decked out in American flag-themed clothing from head to toe. “I can’t just sit around and watch a bunch of amateurs desecrate the flag!” he says. 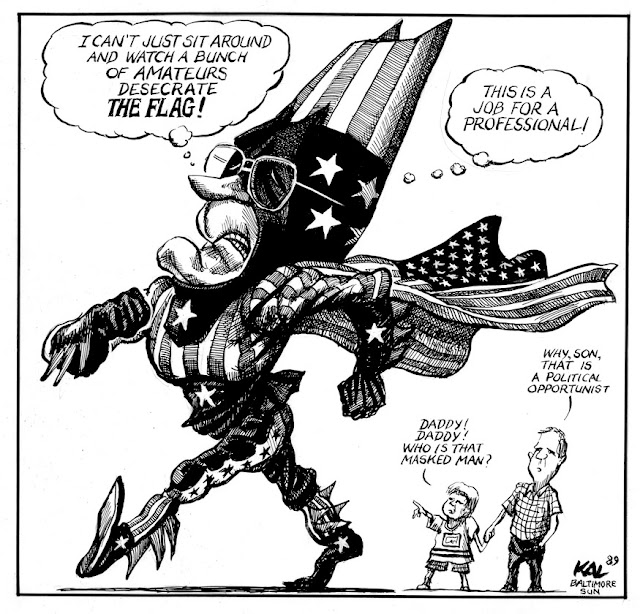 Telnaes noted that editorial cartoons have been an integral part of American political discourse for more than 250 years, since “Join, or Die” appeared in Benjamin Franklin’s Pennsylvania Gazette in 1754. 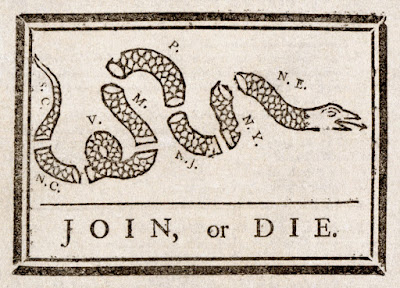 Worldwide, they’re an indicator of a nation’s freedom of expression.

“If there aren’t cartoonists creating tough, pointed satire against their politicians and policies, you can bet that country and its government doesn’t tolerate an individual’s right to free speech,” Telnaes said in an email.

In a 1971 cartoon by Karl Hubenthal in the now defunct-Los Angeles Examiner, a smug Supreme Court justice examines the decision upholding the printing of the Pentagon Papers. Far below, a woman tugs at his robe and questions “the moral question” of printing stolen government documents. 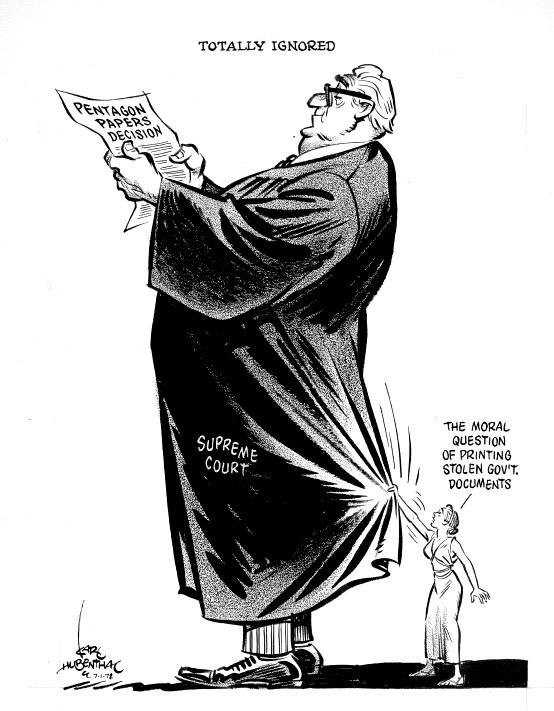 The inclusion of a cartoon from a long-gone paper underscores one of the biggest challenges for cartoonists: the decline of print newspapers and the elimination of many full-time cartooning jobs.

Twenty years ago, the country had about 150 full-time editorial cartoonists, according to Telnaes. Today it’s down to about 40.

Beeler has a cartoon in the Ohio State exhibit that satirizes campus free speech “safe spaces.” 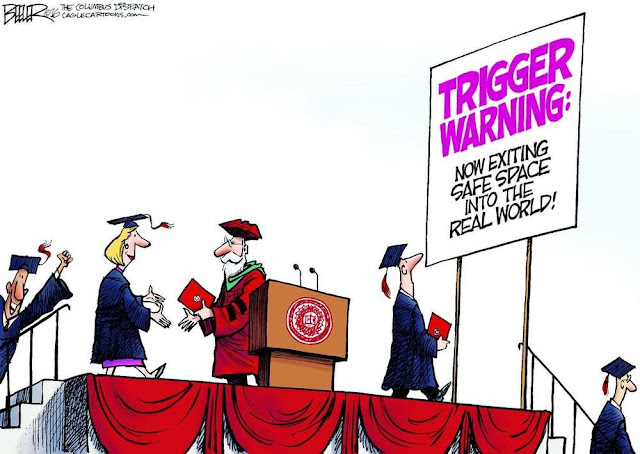 Concluding a series of Friday tweets about his layoff, Beeler said, “Lastly, my heart goes out to the other cartoonists and journalists across the nation caught up in these layoffs. It’s a devastating trend in the news business.”

While the digital age has created new opportunities, it’s still tough for cartoonists to make a living, Telnaes said.

Meanwhile, social media has been both a blessing and a curse.

“Social media is both positive in that readers are more engaged and appreciative of cartoons but also enables special interest groups to target cartoonists and their publications when a cartoon challenges their beliefs and agenda,” she said.

In 1988, the U.S. Supreme Court upheld political cartoons as protected speech in a case involving a Hustler magazine parody ad that lampooned the Rev. Jerry Falwell, founder of the Moral Majority, an ad that’s on display at the Ohio State exhibit.

“From the viewpoint of history, it is clear that our political discourse would have been considerably poorer without them,” Rehnquist wrote.