Marilena Nardi on the role of satire 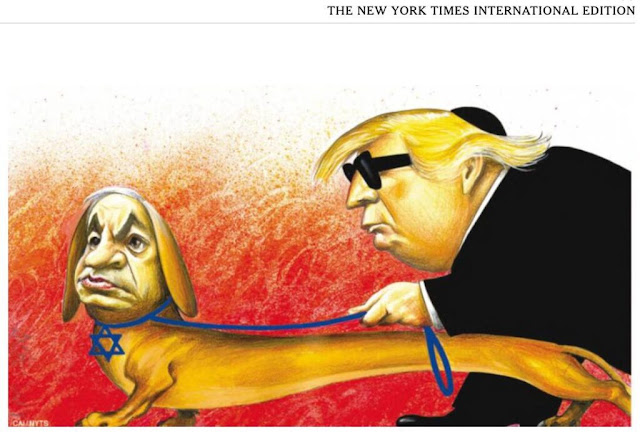 Following a controversy over a cartoon considered to be anti-Semitic, the New York Times announced that it would no longer publish editorial cartoons in its' international edition. In the local one, however, the cartoons have already been eliminated for some time.

We deem this story to be of great interest, also because the New York Times has always been considered a liberal daily. It is, in fact, a question that fits into a wider context, touching on issues such as freedom of expression and "political correctness".

Meanwhile, we tried to better frame the story with the help of Marilena Nardi, a teacher at the Academy of Fine Arts of Venice, an illustrator and graphic humorist who currently publishes in France and who boasts numerous collaborations with political newspapers and satirical magazines.

Among the more than 50 awards won by Marilena, we point out the prestigious 2018 Grand Prix of World Press Cartoon, won with the following illustration on freedom of expression.

"I followed closely the story related to the cartoon by António, first published and then canceled with apologies to the readers because judged anti-Semitic (a double mistake, in my opinion). Published by the NYT without the author, among other things, knowing anything about it. But this is yet another chapter of the story.

I think it's a bad decision. The NYT is an authoritative newspaper. It was known to be very critical of Trump and now it capitulates after strong pressure received both from above (among the first to attack him on the net there was the son of the American president and then the lobby and the Israeli press), and from below, with the users who hurled themselves against the newspaper and against the author of the drawing, accompanying everything with insults and threats.

Now, a month and a half after the episode which seemed, if not resolved, at least concluded, the decision was made to dismiss two historical collaborators, Patrick Chappatte and Heng Kim Song, and close the section devoted to editorial cartoons.

I find it a bad signal. A bad decision, because other less authoritative and strong newspapers could follow the example. We know that there are countries where it is impossible or extremely risky to express an opinion.

There are illiberal democracies where one ends up in jail for a drawing. Consider the case, just for example, of Musa Kart, imprisoned in Turkey.

But it is worrying when one yields to such pressure in the most objectively liberal of countries.

The editorial cartoon has always used tools such as humor, caricature and satire. It is a type of drawing that represents a precise genre within journalism. It often emphasizes, exaggerates, "charges" with the graphic tools that belong to it, because it has the task of laying bare, of revealing.

It cannot be "politically correct". Humor and political correctness are two opposite terms.

If you are politically correct, you are also neutral, harmless, useless or, worse, aligned. In this case, it is no longer an editorial design, but a wink to power and something very similar to propaganda. And this, in my opinion, is the real danger to democracy.

The editorial cartoon represents an opinion, that of the draftsman who in this case is an attentive observer of the facts and possesses the ability to translate them into an image, highlighting the fault and rendering an authentic service to the reader.

A drawing reaches the public in an immediate, powerful, faster way than a written text. But the reader is not always able (or has the honesty) to read it correctly.

The role of a newspaper is also to be a supporter. To defend the different voices and opinions, to promote if nothing else a debate, not to eliminate those that could turn out to be "inconvenient".

A newspaper that obeys the pressures of politics and the media and that censures itself is a newspaper that becomes small, cowardly and weak. It goes against the very meaning of its' existence. "
Published by Bado at 8:23 AM