Response to "The New York Times" ban on editorial cartoons (1)

Lloyd Grove in The Daily Beast.

CNN anchor Jake Tapper told The Daily Beast that the Times has driven “just one more nail in the coffin of what is a struggling art form,” while cartoonists have called the decision “devastating,” “spineless,” and “chickenshit.”

“Look, it goes with the territory,” Bennet said about the storm of indignation, while offering a detailed defense of his decision in an exclusive interview with The Daily Beast. “I appreciate that people care. I don’t pretend that these are easy calls. You have to hear the criticism.”

Much of that criticism—from prominent political cartoonists interviewed this week, including several Pulitzer Prize-winners—is angry, bitter and personally insulting.

“The irony is that the New York Times barely ever dips their toes into the waters of political cartooning.

But a lot of people don’t know that, and their influence in newspapering is so vast that what’s terrifying is that smaller newspapers might take the cue from them to say ‘Look, this entire genre shouldn’t exist.’”

Like Pett and the other cartoonists who were interviewed, Politico’s Pulitzer-winning cartoonist Matt Wuerker attributed Bennet’s decision—which he announced on Monday in a press release—to the continuing outrage prompted by the international Times’ publication in April of a cartoon mocking Israeli Prime Minister Benjamin Netanyahu that was widely slammed as anti-Semitic.

The cartoon depicted a blind, yarmulke-wearing Donald Trump being led by a dachshund sporting the face of Netanyahu and a Star of David dog collar.


In the midst of the controversy, the Times—blaming the cartoon on an unidentified editor who lacked “adequate oversight”—apologized and severed relations with the syndication service that had been supplying cartoons to the paper for decades, and also announced that it would cease publishing syndicated cartoons altogether.

“I think the message that’s being sent is that they’re spineless and really can’t take the heat,” Wuerker told The Daily Beast.

“This whole episode started out with the anti-Semitic cartoon that slipped through their editorial side and created that shit storm. I find the whole thing kind of tragic and a little bit pathetic.”

Fired cartoonist Patrick Chappatte agreed, telling The Daily Beast from his home in Geneva, Switzerland, that he feels like he’s being punished for the work of someone else—in this case, Portuguese artist António Moreira Antunes, whose Netanyahu cartoon was originally published by the Lisbon newspaper Expresso.

“Now the message is too difficult to handle, so it’s much easier just to get rid of the messenger,” said the Lebanese-Swiss Chappatte with a pronounced French accent.

“It’s a worrisome sign, saying the whole genre is not for you. My cartoonist-colleagues are right to take it personally.”

Bennet, for his part, denied that the latest decision—which ends the publication of daily political cartoons, effective July 1—was a response to the Netanyahu flap.

“I can tell you this: We’ve been talking about making this move for a long time,” Bennet said. “Once we decided not to do syndicated cartoons, it seemed like a logical step to make this move as well. That’s the truth.”

Bennet rejected the claim by several cartoonists that if indeed his decision was unconnected to the previous uproar, he could have waited longer to execute it.


“That’s like an appearance and PR strategy,” he scoffed. “We need to do what’s right for our readers, and that’s why we’re doing this.”

Bennet, who noted that during his tenure the Times won its first Pulitzer ever for editorial cartooning—for a 2017 graphic novel-like presentation of a Syrian refugee family’s new life in America—argued, “We have been very strong in visual opinion journalism, including graphics and video.

The budget is not unlimited. This is part of a broader shift away from work that’s really reactive to work like the Syrian cartoons that is more enterprising.”

He continued, “We think that serves more of our readers and can have more impact toward the good in the world…. So to say we’re not interested in championing excellent work in this field, I think, is belied by our own record.”


Bennet bristled at the accusation that his decision is evidence of “spinelessness.”

“You can reach your own judgment if you think there’s a pattern of spinelessness here,” said Bennet, who has taken flak for hiring—and resisted calls for the firing of—such incendiary columnists as conservative Bret Stephens and Bari Weiss, and absorbed a barrage of incoming brickbats for devoting the entire editorial page to letters from Trump supporters. “I think that’s preposterous.”

Meanwhile, CNN anchor Jake Tapper (who regularly features his own political cartooning on his Sunday public affairs show, State of the Union), blasted the Times’ move as “just one more nail in the coffin of what is a struggling art form, given how corporate American has taken over local newspapers and gutted the industry…

It's regrettable that at this time when journalists are under fire literally and figuratively that more newspapers aren't doing everything they can to support editorial cartoonists.”


In an email exchange, Tapper elaborated: “The Times should be a leader for editorial cartooning, it should blaze a trail for other newspapers to follow, as it does in so many other ways… Other media organizations look to her to assess how to behave.

The paper has already all but stopped running editorial cartoons in its U.S. edition; I would love for editors to lead the way and not only reverse this decision internationally but domestically as well.”

Unlike many other newspapers in Great Britain, Europe, Africa, and the United States, notably The Washington Post—which famously published the legendary Herblock’s daily cartoon for more than half a century and currently boasts two in-house political cartoonists, Tom Toles and Ann Telnaes—the Times historically has seemed allergic to the art form.


Some observers ascribe the paper’s apparent aversion to the reigning Sulzberger family’s alleged attitude that political cartoons, with their in-your-face messages and harsh caricatures of public officials, are “not Timesian” and “too middlebrow.”

Bennet, whose official statement cited his wish for “nuance” and “complexity” in the paper’s use of visual opinion expression, acknowledged that those aesthetics are often at odds with the blunt-force satire of political cartoons.


The late A.M. “Abe” Rosenthal—a domineering Times editor who was managing editor and executive editor for most of the '70s and '80s—was known to believe that political cartoons had no place in his newspaper because they could not be edited.

That starchy attitude persisted long after Rosenthal’s departure. Patrick Chappatte, in an essay responding to his dismissal on Monday, recalled being rebuffed by a Times art director in the mid '90s when he was in his twenties and looking for a job: “We never had political cartoons and we will never have any.”

Chappatte, who was initially hired as a political cartoonist by the precursor to the Times’ global edition, the International Herald Tribune when it was co-owned by the Washington Post, ultimately found a sympathetic ear in editorial page editor Andy Rosenthal—Abe’s son, who was succeeded by Bennet in April 2016.

Under the younger Rosenthal, the Times’ Sunday Week in Review section regularly ran a round-up of political cartoons from papers around the country—a practice that ended, however, in 2012, after a dispute between the contributing cartoonists and the Times over publication fees. 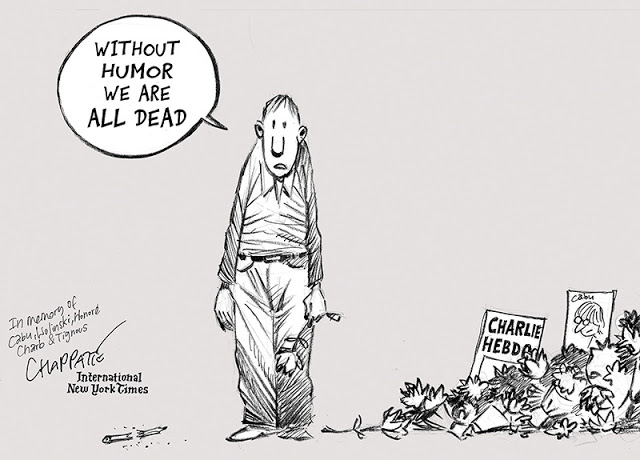 On his web site Monday, Chappatte republished a cartoon he initially drew on Jan. 8, 2015, for the front page of the Times’ web site, after the terrorist massacre of 12 staffers of the French satirical magazine Charlie Hebdo.

“Without humor we are all dead,” says a forlorn figure holding a single rose.
Published by Bado at 3:46 PM