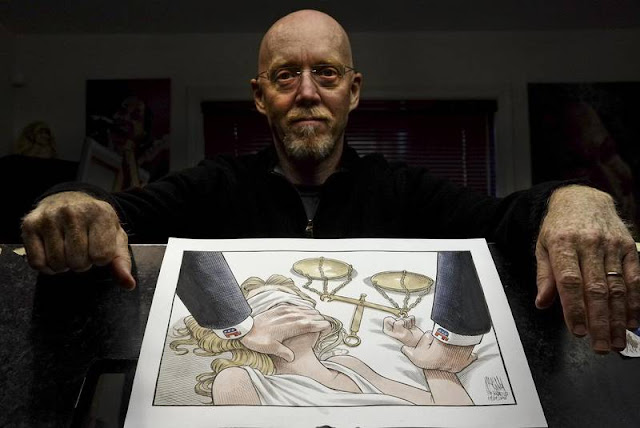 When The Chronicle Herald’s editorial cartoonist Bruce MacKinnon learned this week that his work had been ripped off by some far-off politician, whom he had never heard of, his first reaction was, not again.

When he learned that his cartoon had appeared on the Facebook page of Chris Warkentin, the member of Parliament for the Alberta riding of Grande Prairie-Mackenzie, where it was altered to fit the conservative politician’s partisan political message, MacKinnon got angry.

“Stealing a cartoon is not good,” said MacKinnon, whose work has been lauded around the world. “Changing the meaning is obviously worse.”

In fact, someone had removed his signature from the cartoon that was posted on the website of Warkentin, the deputy house leader for the federal Conservative caucus.

The bigger sin was rewriting the punch line.

The authentic MacKinnon cartoon trashed Trudeau, in the midst of issuing a run of apologies, for being a professional apologist.

The one on the Conservative website more closely fits the party’s Trudeau-bashing election stance:

“Our motto for the 2019 election will be ‘choose forward,’” it read. “After all the last thing we want is for you to look back on what I’ve done for you for the last 4 years.”

When I called Warkentin’s campaign office a woman named Krista O’Greysik said she would need to get back to me.

A few minutes later she called to say that the cartoon “had been posted by a volunteer” and that it had “now been removed.”

MacKinnon replied that it’s fairly easy for a candidate to blame their volunteers “but it suggests you never look at your own Facebook page, and that’s a stretch.”

If he sounds a little exasperated he has a right to be.

Earlier this week satirist Rick Mercer took issue with a Conservative riding association in British Columbia for an internet meme that took an old quote of his, encouraging young people to vote and misleadingly added a message to “Vote Conservative.” 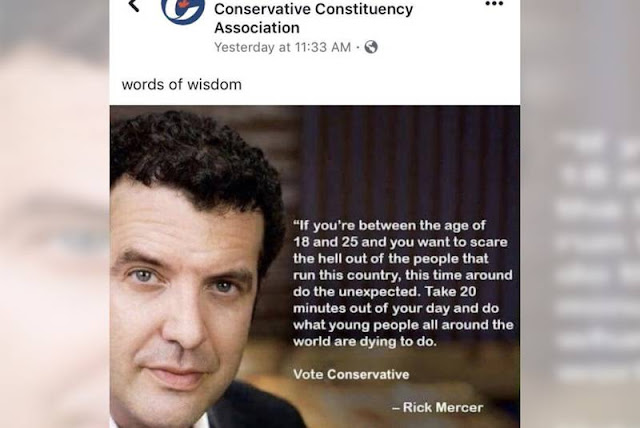 The Chronicle Herald and the artist himself own the copyright for his cartoons that appear in these papers. That means none of his images can be displayed in a “public way” without MacKinnon’s and the paper’s approval.

The internet, which MacKinnon calls “the Wild West,” makes that near impossible to enforce, even if his work is now behind The Chronicle Herald’s paywall.

Getting an image taken down that is being used on Facebook in breach of copyright is a long, drawn-out process involving mountains of paperwork he told me.

Generally, Facebook is “pretty unresponsive” to such objections. MacKinnon’s wife, Peggy, who handles those social media complaints has been successful a handful of times.

But that’s small potatoes compared to the number of times somebody takes his work and misuses it for their purposes.

“I think it would blow my mind if I really knew,” he said.

So he generally depends upon others to tell him, as was the case last year when some entrepreneur, with scant knowledge of copyright law, took MacKinnon’s powerful cartoon after the tragic bus crash involving the Humboldt Broncos hockey team and put it on a T-shirt for personal gain.

Often he doesn’t have to look far.

In 2018, for example, People’s Party of Canada Leader Maxime Bernier used a screen grab of a MacKinnon cartoon lampooning the party’s candidate vetting process, and a misleading tweet about it, to rile up his party base.

That was nothing compared to the uproar over his cartoon that appeared during last year’s confirmation hearings of U.S. Supreme Court Justice Brett Kavanaugh.

You’ve undoubtedly seen the cartoon that has become one of the enduring images in recent political history and now hangs in the U.S. Library of Congress: Lady Justice blindfolded and pinned down by Republican hands, her scales lying beside her, her mouth covered by her attacker’s hand — an explicit reference to California professor Christine Blasey Ford’s account of an alleged sexual assault by Kavanaugh.

But a day or two later, with the American alt-right feeling the heat, the net was filled with images of his cartoon with the cufflinks altered to bear the Democratic party’s donkey image.

With an election underway in Canada, the misuse of his imagery for political propaganda is spreading north. As was the case with Mercer, often the perpetrators can be found on the right of the political spectrum.

The other day MacKinnon got an email from a regular viewer of his work, pointing him to a Facebook page for an organization known as Alberta Blue Skies.

When he clicked on it, there was his Lady Justice cartoon. But the GOP logo had been changed once again.

This time the cufflinks of the attacker were adorned with the Liberal Party of Canada’s red insignia.

Out of curiosity I scrolled through the comments section, which went on for a long time, and where some very disparaging things were said about Liberals.

By my count only five posters among the many pointed out that the cartoon was a ripped-off, doctored version of MacKinnon’s iconic image, which was more than a year old, and about political events in a whole other country.

The truth is, in these rancorous political times, hardly anyone on the website seemed to really care.
Published by Bado at 12:00 AM