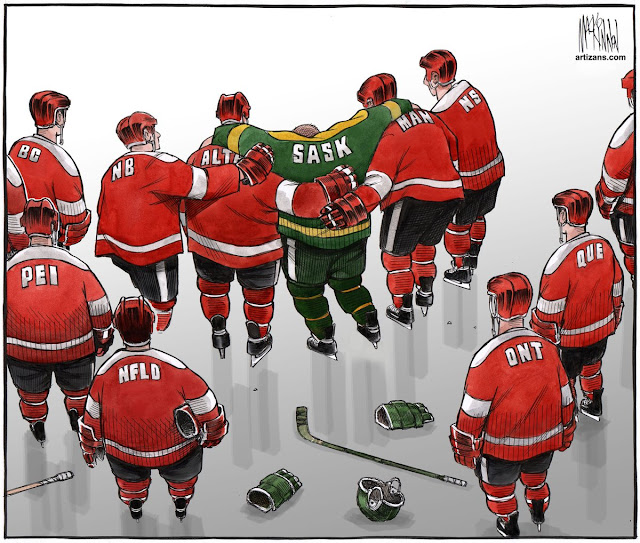 A Nova Scotia cartoonist’s illustration capturing the country’s pain in the wake of the tragic bus crash involving the Humboldt Broncos junior hockey team is being described online as powerful, poignant and heart-wrenching.

The cartoon by Bruce MacKinnon, an award-winning cartoonist with the Halifax Chronicle Herald, shows a hockey player dressed in the Broncos green and gold slumped over on his skates with the word “Sask” across his back.

He is supported by 10 other players dressed in red with the provinces’ short forms on their jerseys.

MacKinnon posted the image on Twitter with the hashtags #HumboldtBroncos #BroncosStrong.

He told Global News that when reports of a crash involving a junior hockey team in Saskatchewan emerged he immediately thought of the 2008 incident in Bathurst, N.B., when a van crashed into a transport truck killing seven members of a high school basketball team and the wife of its coach.

“Immediately you’re sad, crushed, because it’s such a traumatic event and you think about the families who have lost their loved ones,” Mackinnon said. “The entire country is sort of going through this trauma all over again.”

And while it’s hard to find any positives when so many young lives are lost, MacKinnon said, tragedies have a way of bringing people together.

“The one good thing, I guess, is that it does tend to unify a country,” he said. “Canadians come together — they want to do something, they want to feel like they can do something positive.”

The illustration has been shared widely on social media following the horrific crash last Friday in Saskatchewan when a bus carrying the Broncos junior hockey team collided with a semi-truck killing 16 people — including 10 players between the ages of 16 and 21 — and injured another 13 passengers.
Published by Bado at 12:00 AM