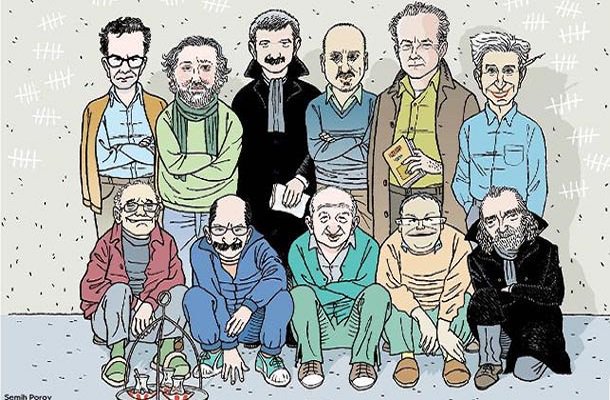 Turkish cartoonist Musa Kart, along with 13 others, was sentenced to jail today, the culmination of a long sham trial resulting from a crackdown on political opponents by Turkish dictator Recep Tayyip Erdogan in response to a failed coup attempt in November of 2016.

A Turkish court on Wednesday sentenced 14 staff of the opposition Cumhuriyet newspaper to prison on terrorism charges and acquitted three, one of their lawyers said, in a case that has sparked global outrage over press freedom under Tayyip Erdogan.

The court handed down sentences ranging from 2 1/2 to 7 1/2 years to the Cumhuriyet staff, lawyer Ozden Ozdemir told Reuters.

Another defendant in the case, who was not employed by the paper and had been charged for his activities on Twitter, got the stiffest sentence, 10 years, Ozdemir said.

Ahmet Sik, a well-known journalist and author, was sentenced to 7 1/2 years, the harshest penalty among the staff.

The court also ruled the case against the prominent journalist Can Dundar, previously the newspaper’s editor-in-chief, would continue separately, court records showed.

The staff of the newspaper - long seen as a thorn in Erdogan’s side and one of the few remaining voices critical of the government - were charged with supporting the network of Fethullah Gulen, the Muslim cleric Ankara holds responsible for a failed 2016 coup attempt.

They have denied the charges.

“This was absolutely not a lawful verdict. At the end, it is a political case,” Ozdemir said, adding the charges would be appealed.

All 14 staff were released pending appeal, Ozdemir said. The other defendant was detained.

The case is one of several high-profile trials seen as emblematic of the broader crackdown since Erdogan announced a state of emergency following the attempted coup.

“It has been journalism itself that has been in the dock and today’s verdicts defy logic and offend justice,” said Milena Buyum, Turkey campaigner at rights group Amnesty International.

“These politically motivated sentences are clearly intended to instill fear and silence any form of dissent.”