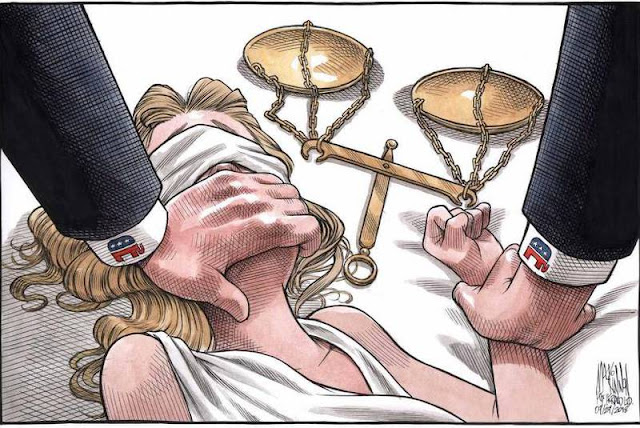 The library has asked to include MacKinnon’s Sept. 29 cartoon that depicted the attack of Lady Justice by the Republican Party.

The image shows Justice blindfolded and pinned down as a man’s hand covers her mouth, which is how Ford described an alleged sexual assault by Kavanaugh dating back to 1982.

The cuffs on the man’s shirt bear the Republican elephant.

The Library wants the image as part of its historic collection of Internet material related to the women’s and gender studies web archive.

“We consider your website to be an important part of this collection and the historical record,” the request to include the URL says.

The Library preserves the United States’ cultural artifacts, and says its traditional functions of acquiring, cataloguing, preserving and serving collection materials of historical importance to the Congress and the American people extends to digital materials, including websites.

MacKinnon said the request came as a surprise.

“I don’t know a lot about (the Library) to tell you the truth, but it’s an honour to be included. It’s the last place I expected one of my cartoons to end up,” he said.

“I guess it’s something that they consider this cartoon as being worthy of being included there. I would think that most of what they put in the collection is American material. It’s quite a stride for me.”

That speaks to the amount of attention the cartoon received in the American media after it was published, he said.

“That surprised me too,” he said. “Some cartoons you don’t expect to take off like that.”

He said it was interesting to watch the arc of the cartoon being shared.

“It really took off and spread, and the response was overwhelmingly positive, especially from the #metoo community, but I think as the Republicans or the far-right felt the sting of the cartoon, the more backlash there was.

In the weeks afterward there was a lot of blow-back from the right. It certainly raised a lot of debate in the U.S., which was good. That’s what they’re supposed to do.”

The cartoon was nominated for inclusion by Meg Metcalf, the librarian for women’s, gender, and LGBTQ+ studies at the library.

She was not immediately available to talk about the nomination.
Published by Bado at 12:00 AM