Neil Steinberg in The Chicago Sun-Times. 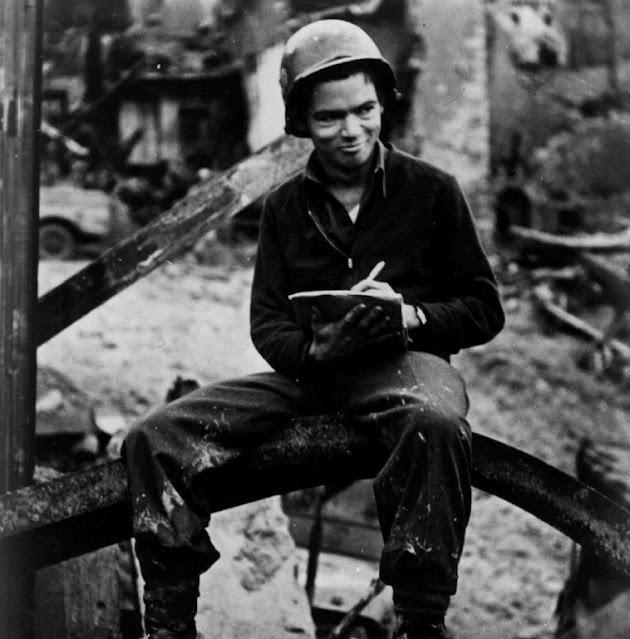 “Who is Bill Mauldin?” reads lamppost banners outside the Monroe Building, where “Drawn to Combat: Bill Mauldin & the Art of War” opened Friday at the Pritzker Military Museum & Library, 104 S. Michigan.

A sad, almost a shocking question. But the truth, which he so revered, is that in 2021, Bill Mauldin’s name will evoke nothing to many, or else be a distant ping.
If fame were doled out according to impact, Mauldin would stand today among the best-known Chicagoans.
Alas, people forget.

Mauldin not only changed how Americans viewed World War II but how we think about war and the military.
At a time when the Army was presenting its shiniest spin, when a photo of an American casualty would never be seen in a newspaper, when cartoons about Army life were Sad Sack peeling potatoes, Mauldin created Willie and Joe, a pair of exhausted, bedraggled infantrymen flat on their bellies in the mud, hoping to live long enough to smoke another cigarette. 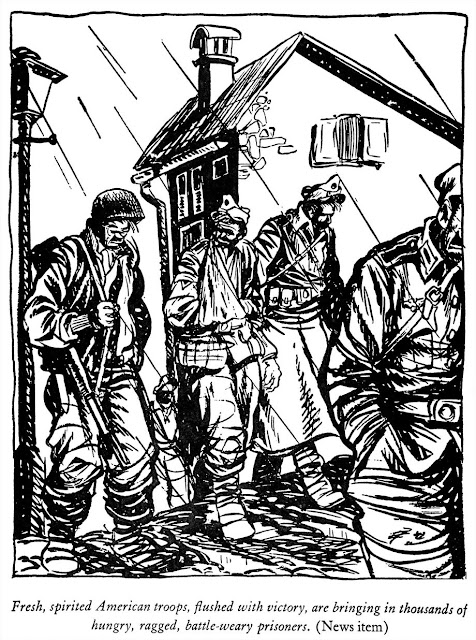 Nor did his influence end on V-E Day.
After the war that made him famous, Mauldin advocated liberal causes decades before they became common.
Odds are, if you believe strongly in social justice, Mauldin was advocating your core principles before you were born.
He was fighting for civil rights when Martin Luther King was a teenager, for gay rights in the mid-1970s. He wasn’t just a cartoonist but an artist, a Chicago artist.

OK, “Chicago artist” might be a stretch.
Mauldin lived most of his life in the Southwest, born in New Mexico, settled in Arizona.
But in between, he came to Chicago for a key year to learn his art at the Chicago Academy of Fine Arts.
And was an editorial cartoonist on staff at the Sun-Times for almost 30 years.
The entire story is told at the Pritzker Military Museum & Library, founded in 2003 by Col. Jennifer N. Pritzker, Gov. J.B. Pritzker’s cousin.
The show is an in-depth, satisfying look at his times and artistic development, from his high school paper to his two Pulitzer Prizes.

“This has got a little bit of something for everyone,” said curator James Brundage. “Military, politics, artwork.”

The exhibit pairs the Purple Heart Mauldin was given for being wounded in action —shrapnel from a German shell — with the cartoon it inspired.
The wound itself a not-unimportant development in Mauldin’s growing success, as rank-and-file soldiers, who value authenticity above all, were grumbling that Mauldin was depicting their lives from the safety of the rear.
Another juxtaposition is a cartoon about the dangers of the surveillance state, next to his FBI file showing the same cartoon: obviously the work of a subversive.
A history lesson that keeps bumping into current events.
So many aspects of Mauldin’s work and career are relevant today, but there’s one that deserves to be highlighted. 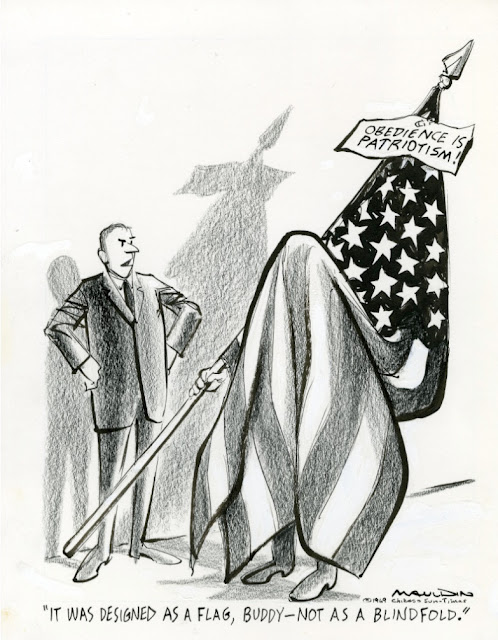 Before his work was syndicated to newspapers across America, it was featured in Stars & Stripes, the U.S. military organ with a circulation greater than any civilian newspaper.
And given that Mauldin often displayed soldiers as unkempt, filthy, ragged, exhausted, why did the military brass allow him to do it?
Some did want him to either toe the line or stop. Gen. George S. Patton, he of the pearl-handled revolvers, once famously called Mauldin in for a dressing down.

But generals like Supreme Allied Commander Dwight D. Eisenhower knew better. The enlisted men were certainly aware of what their own lives were really like, and it would be encouraging for them to see that truth reflected back at them, in a way they could laugh about it.

Besides, the actual truth was far worse.
In the grueling, hand-to-hand, town-to-town fighting in Italy, thousands of American soldiers deserted.
Mauldin was both far more real than anything else around, yet tidier than the grim reality, where more American servicemen died of alcohol poisoning than disease.

Does that fact make our country look bad? Or does it underline how terrible the situation was?
I think the latter.
Then I believe, like Bill Mauldin, that facing truth is strength, real strength, no matter what that truth is, particularly when compared with those supposed Americans who condemned themselves to live a lie in the delusion that doing so makes them seem strong.

The notion of speaking grim truth is front and center in the exhibit. An accident?

“It’s intentional,” said Brundage. “He never held back ... If there’s something worth saying, and it’s there, don’t ignore it.”

I can’t begin to jam even a fraction of this fascinating show into a column.
But with people poking their heads out and looking for a reason to go somewhere, I’m confident offering the exhibit up as a destination.

I went Friday, the first cultural show that brought me downtown since the Art Institute put on an El Greco exhibit for a week in March 2020, a juxtaposition that would have made Bill Mauldin smile, in his impish, sardonic, self-depreciating way.

Maudlin had no quit in him.
The man died in 2003, but it feels natural that his artwork, in this must-see exhibition at the Pritzker Military Museum & Library, would show up to guide and inspire us anew, just when we need it, stiffening our spine during these particularly troubling days in our American experiment.