"Into the Swamp: The Social and Political Satire of Walt Kelly's Pogo" exhibition is on display through October 31, 2021 at the Billy Ireland Cartoon Library & Museum in Columbus, Ohio.
Walt Kelly’s newspaper comic strip Pogo was a platform for political satire and commentary using a motley group of swamp critters.
Kelly tackled many of the political issues of the world in which he lived, from the Red Scare to civil rights, the environment, scientific exploration, and consumerism.
We celebrate Walt Kelly and his social commentary through the joyous, poignant, and occasionally profound insights and beauty of the alternative universe that is Pogo. 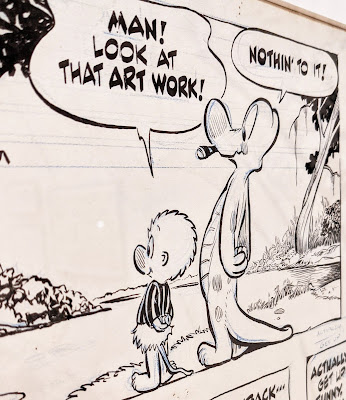 Working in the mid-twentieth century, Kelly drew on the legacy of earlier generations of newspaper cartoonists and then became a major influence on his successors.

Co-curated by Lucy Shelton Caswell, Professor Emerita and Founding Curator of the Billy Ireland Cartoon Library & Museum, and Jenny E. Robb, Curator & Associate Professor.
Into the Swamp: The Social and Political Satire of Walt Kelly's Pogo
June 19 - October 31, 2021
Billy Ireland Cartoon Library & Museum
The Ohio State University
Sullivant Hall, 1813 N High St, Columbus OH 43210
(614) 292-0538 | Fax: (614) 292-9101
Email: cartoons@osu.edu
Gallery hours are Thursday through Sunday, 1:00 pm–5:00 pm.
Reservations are recommended, please visit cartoons.osu.edu/gallery-visit-reservation to book your visit. Walk-ins are welcome, but you may be asked to wait if the museum is at capacity.
Published by Bado at 12:00 AM