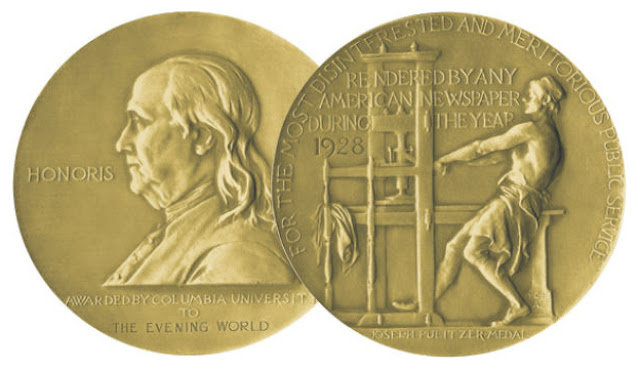 Over the years I often made friendly bets with other cartoonists on who would win the Pulitzer Prize for Editorial Cartooning. We never wagered money but instead played for bragging rights and the sheer chutzpah of handicapping our friend's work in the race for journalism's "big award."
Not anymore. There's no point.
It's become abundantly clear that the Pulitzer Prize Committee — which will bestow their annual awards this Friday, June 11 — not only doesn't know what an editorial cartoon is, they have little interest in what makes a great political cartoon.
This was driven home by the change in the rules this year, which expanded the category to include illustrations — an alteration that will greatly swell the field of candidates but also water down the strength of the editorial work currently being drawn by a small but hard-hitting niche of incredibly talented American political cartoonists.
Now the Pulitzer Committee can just pick something pretty and move on, hopefully dodging controversy by naming a winner whose work is, if not safe for consumption by the media elite in midtown Manhattan, at least not too political.
This isn't to say the prize will go to anyone unsuitable, but the committee certainly appears to have lost interest in giving the award to a deserving editorial cartoonist — ie, the very thing the category was created for in the first place
.
Only two daily newspaper cartoonists won in the past four years, including Darrin Bell — the first African-American cartoonist to ever receive a Pulitzer.
Meanwhile the folks at Columbia University gave the prize to someone who does occasional covers for The New Yorker, and suddenly discovered webcomics by picking a long-form bit of graphics reporting that appeared on the New York Times site.
(To be fair, that should probably be rediscovered graphic novels, as the committee gave a special Pulitzer to Art Spiegelman's Maus in 1992 and then promptly forgot the genre existed for almost 30 years.)
Almost as egregious is that, while many alt-weekly political cartoonists have been named finalists, only one alternative cartoonist — Jules Feiffer — has ever won the big Prize in the 60+ years the form has been around.
Does any of this really matter though? Isn't it just an honor to be nominated?
Actually, it is.
The problem here is the way the Pulitzer Prizes are chosen. There is a panel of judges, including professional cartoonists and past winners, who meticulously and thoughtfully pour over hundreds of entries (with little to no renumeration by the way), and select three finalists.
This list of recommendations is then passed on to the Pulitzer committee, who are free to select one of the finalists — or ignore the recommendations of the experts and name their own pick.
(From what I've heard from past judges, speaking on background, a lot of horse trading goes on among the committee members, who often add a name to one category in exchange for getting a favorite picked in another.)
And here's where we get to the truth about awards: It's a misnomer to state that anything that wins a prize is objectively "the best" of that thing in that category.
All too often the public thinks that panels of judges have scoured the land, seeking every possible work that appeared during the year and carefully weighing them against the rest — when in actuality a small jury (that may or may not be comprised of experts on the subject) looks over submissions from applicants who paid an entry fee and took the time and effort to send in their material, and then by process of elimination subjectively choose one of those they feel is most deserving.
Sometimes there is voting, sometimes a single juror makes the pick based on their own personal preferences.
(And here's where I go full disclosure: I've been a judge for several awards and selected juries for other contests I was managing. And lest you think this entire screed is comprised of sour grapes, I'm staring at a medallion hanging over my desk for First Place in illustration from the national alt-weekly association. As the joke goes, awards don't mean anything, until you win one.)
I've seen so many complaints, from both creators and commenters, that so many cartoonists are overlooked by so many awards — when the simple fact is they may not have even entered.
Many artists, on both the left and right, see awards like the Pulitzer as biased against them and that entering is a waste of money.
Many have given up even trying, further reducing the pool from which a winner shall be named.
It all comes down to that word: deserving.
There are lot of people who deserved to win the Pulitzer for their work in the past, and didn't.
There are a lot of people I would love to see named tomorrow afternoon.
I would be ecstatic if the Pulitzer committee finally recognized Pat Bagley or Tom Tomorrow or Jen Sorensen or Ruben Bolling or Lalo Alcaraz or Ted Rall (who didn't even get a nod the year he sent graphic dispatches live from Afghanistan, which is the kind of shit the committee usually loves.)
Matt Bors, Kevin "Kal" Kallaugher and Rob Rogers have all made the final list several times and should have received the Prize before now. (Hell, Mike Thompson has been a finalist four times without winning, which may be a record.)
Even if a previous winner like Ann Telnaes were to be named no one would quibble about it, as she is doing not only the best work in her career but some of the most powerful cartoon commentary so far this century.
Will the Committee at Columbia University recognize that calibre of excellence?
Heck if I know.
Awards are designed to draw attention to the institutions handing out those awards, and promote the interests the people running those contests feel is most important.
You could go through this rant and replace "Pulitzer" with 'Oscar" or "Emmy" and get the same result.
It's nothing personal, it's just business.