"V for Vendetta: Behind The Mask" at the Cartoon Museum 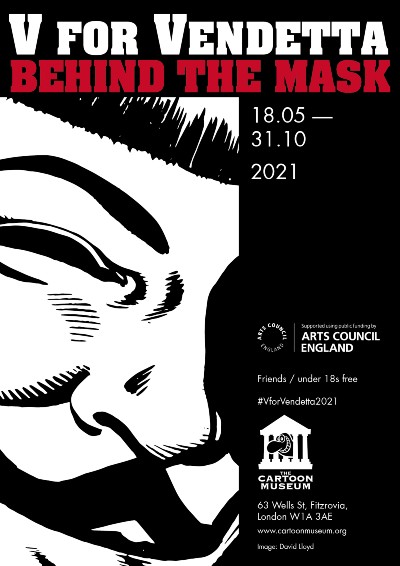 This major new exhibition invites you to step inside the story and characters of one of the world’s most iconic graphic novels: V for Vendetta.

Presenting 36 original comic artworks alongside storyboards and costume designs from the hit Warner Bros movie, V for Vendetta: Behind the Mask charts the rise from comic to graphic novel, Hollywood film to iconic symbol of protest.
Featuring exclusive never-before exhibited works, including an original prototype mask from the film, this new show also explores the voices of protesters in the real world and asks you to explore your own beliefs about big ideas, from protest and rebellion to freedom and justice.

Exhibition organised by The Cartoon Museum in collaboration with David Lloyd. Presented with permission from DC Comics and supported by funding from Arts Council England.
Tickets for V for Vendetta: Behind the Mask are available online from the Cartoon Museum here.

Read also:
V for Vendetta: Behind the Mask – Alan Moore and David Lloyd’s Comics Classic is in the Spotlight in the Latest Exhibition at London’s Cartoon Museum
Published by Bado at 7:19 AM