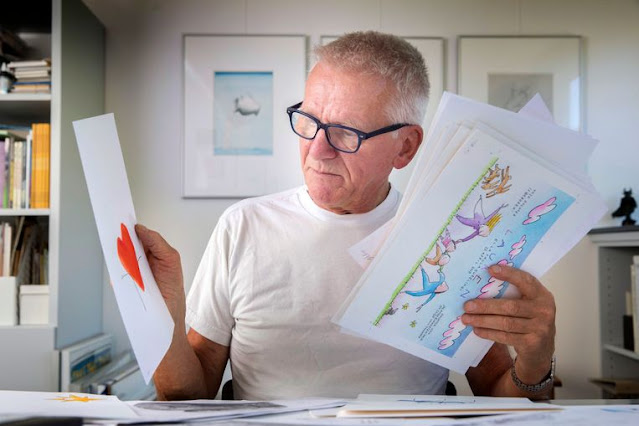 Cartoonist Len Munnik has been drawing for Trouw for 45 years and all that time his work has been about war and peace, about justice and injustice.
Campaigning makes sense, he says, even with pen, ink and paper. "I haven't gotten cynical."
The drawing for tomorrow's newspaper is already sketched on his desk at ten o'clock this morning. "Office hours, huh." Len Munnik switches on the light box, takes a white passe-partout with the cutout exactly the size of the drawing as it appears on the opinion page and slides it back and forth.
"That way it might be a bit clearer, more exciting. Or a bit more like that."

The sketch is made in pencil. Later, when he's happy with it, he'll draw again. Then he makes it with ink and colors it.
It's the day before the NATO summit with Trump. Len has drawn a table, laid it and with a NATO flag on it. Next to one of the signs is a club. Now the broad smile disappears from the artist's face.
"That Trump. That's bad, isn't it?" The idea of ​​the club came immediately, he says. "First I had drawn a caveman, but it also had to be something American, so it has become a baseball bat after all. With spikes."
He moves back and forth with the passe-partout again. Thoughtfully, "I think I'm just coloring the bat." A quick glance at the interviewer follows. 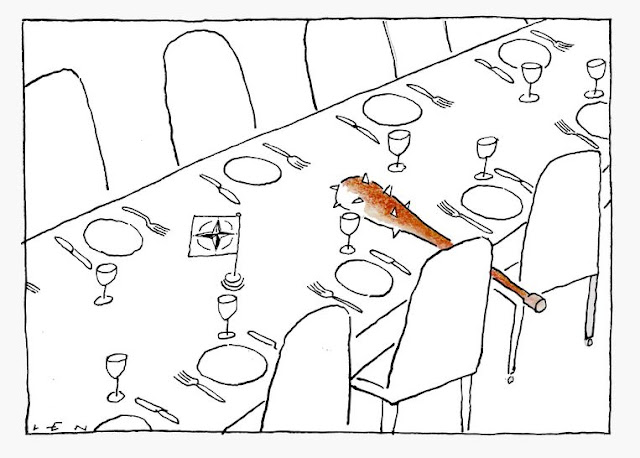 Len Munnik (72) has been signing for Trouw for 45 years. Even if his name is not there, regular readers will know who the artist is, because he has his own style. Poetic, with pastels. Light blue, soft green, those are true Len colours.
But his message is often sharp. He calls himself 'still a peace activist'. Just say a world improver. Almost all of his work, including what he does next to Trouw, touches on the theme of war and peace, with justice and injustice, with the powerlessness of the weaker in society.
He could easily be called a socially responsible entrepreneur.
Has his belief in a better society changed in those 45 years, perhaps less? He is silent for a moment. "I have not become cynical." And yes, he does believe that drawings can help to expose injustice, and that then something changes, even improves. 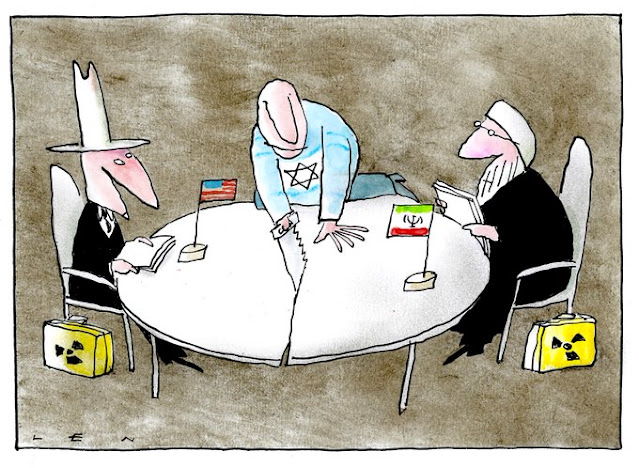 Take the action that was taken years ago in Vlaardingen against the construction of the A4, the highway between Delft and Schiedam. The road would go right through a nature reserve.
"I ran there, I loved that area. That's impossible, that there will be a road, I thought at the time. It was the last piece of green there."
A protest group was formed, in which Len Munnik participated with full conviction. "Meeting is not my forte, so I said: 'Let me draw.' You have to know your limitations."

That road has been built, but has been constructed in a deepened way, so that the view of the nature reserve has been preserved.

There are many action groups and movements that Len Munnik has signed up for. The action group 'Growth resistance', against waste dump in the Lickebaertpolder near Maassluis. 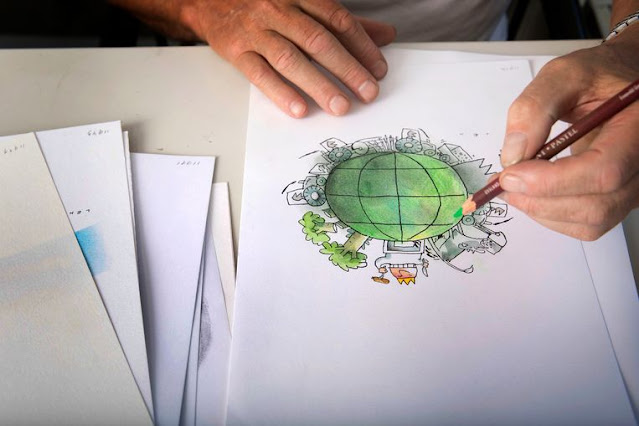 Toasted sandwiches
Anke Munnik enters the study with coffee and apple pie. She apologizes: she has to go downstairs soon. Today is the last day of school for their three grandsons and a food truck with sandwiches will drop by at school.
That school can be seen from their house and Anke has occupied a parking space in front of the sandwich truck with their own car. But now the sandwiches are coming and she has to take the car away.
Len: "Anke was sixteen when we started dating. She's my muse and my sieve." 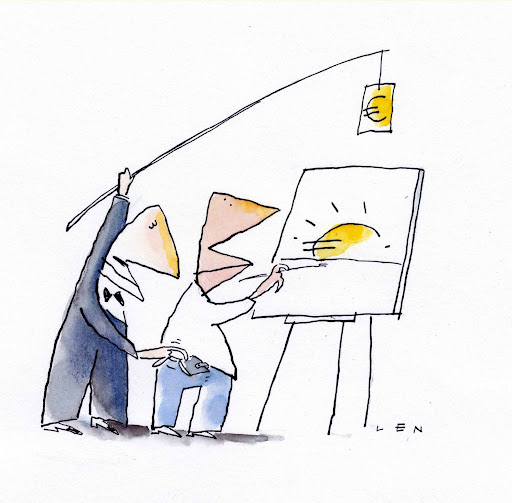 Archive
A move from a large detached building to a terraced house, to be closer to his widowed daughter, had an unexpected result.
Not only did furniture have to go, but there was also Len Munnik's enormous archive. His many, many drawings, all the brochures, books and magazines he ever worked on. His books.
What were they supposed to do with it? Someone suggested to house it at Atlas Van Stolk in Rotterdam which manages a lot of visual material about the history of the Netherlands.
Atlas Van Stolk reacted with satisfaction. The institute will digitize all twenty thousand drawings by Len Munnik, so that they will be available to a wide audience.

A start was made last year. Of the approximately ten thousand political drawings, half have now been digitized and annotated.
Munnik drew political drawings, first on page 3 ("I didn't want to be on the front page, I thought that was a bit too much.") and then at the bottom left of page 1.

Munnik now signs for the opinion page, first three times a week, now twice.
There were years when he made as many as ten drawings a day. Now that he's calmer, it takes him longer to draw. "I draw more easily now than then. Easier. You can leave out more, yes."

Same song
The inspiration for his peace activism came from the church, the Reformed Church of Vlaardingen. And also of the PPR, of which he was a member and which later merged into GroenLinks.
"Left wing circles, that suited me very much." The bond with Vlaardingen still exists. 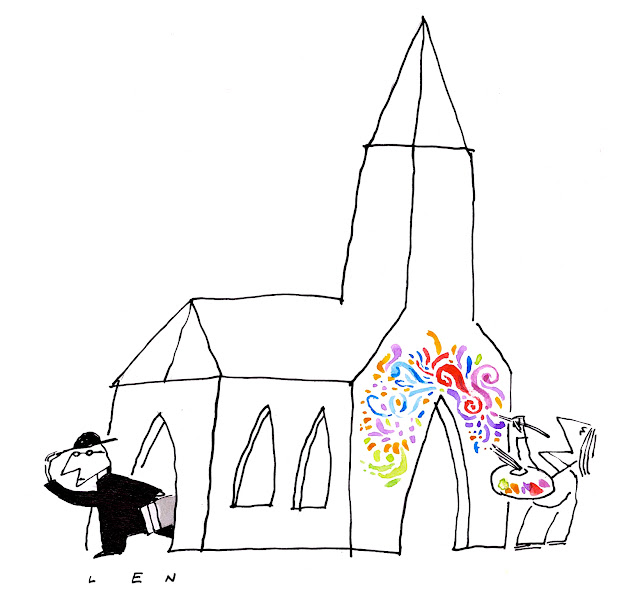 Len Munnik has not become cynical, already signifying the peace.
But sometimes he is shocked. He switches off the light box again and tells about a trip to the US. "I once walked in Washington with the International Fellowship of Reconciliation, a Christian peace movement. Then you think: 'That must have an effect.'
We were at the Capitol, a group of Americans was praying and singing And then this redneck, you know, a cowboy hat guy said to put all those people up against the wall and blow them off You don't expect such a reaction, do you?"

And does that make him aggressive? "No. Sad. Still." 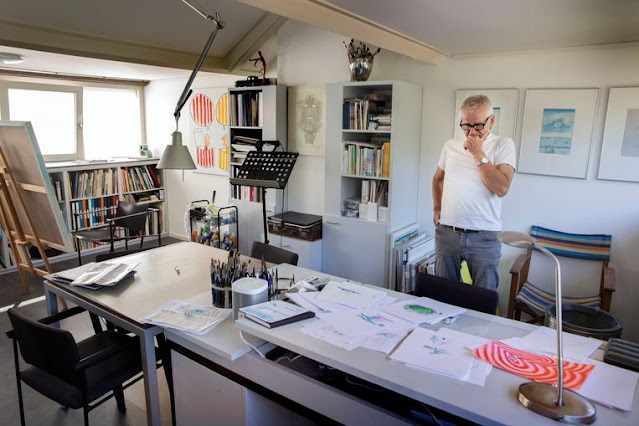 But he continues to believe that campaigning, even with pen and ink and pastels, can have an effect.
The time for campaigning is not over yet.
For example, Len Munnik finds it strange that there is still no action group in Dordrecht against the Chemours company, formerly DuPont, which for years has discharged toxic waste from the GenX technology into the water.
According to Munnik, this action group should be set up immediately. "Me? No, that's not for me, setting up an action group. Others should do that. Then I'll make the pressing drawings."
Published by Bado at 12:00 AM