Kevin Griffin in The Vancouver Sun. 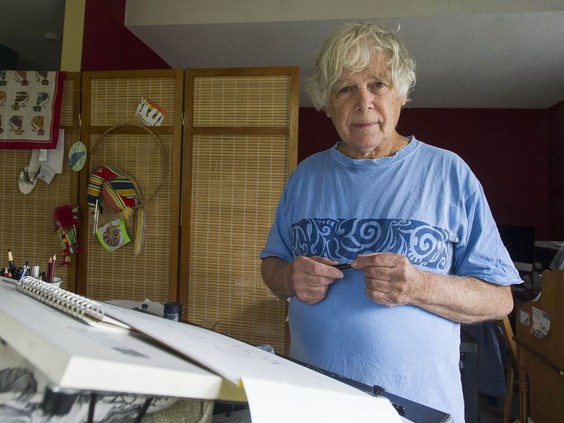 Graham Harrop looks as whimsical as you might expect from a cartoonist known for aiming at the funny bone.

He seems to have a perpetual wry smile, like he’s hard-wired to see the absurdity of life.
On his head, white hair tumbles over his forehead and ears. That he has so much of it at age 77 is a wonder.
He’s fast, too. During an interview, he had time to sketch an ironic cartoon about being interviewed and photographed on the occasion of creating cartoons for the Vancouver Sun for 25 years.

He sketched himself as a beleaguered cartoonist at his desk who says in a word balloon: “Will these guys never leave — I’ve got a deadline.”

He also has another side. It’s Harrop the cartoonist who feels deeply about major world events.

You can see the evidence of that in a recent cartoon about the horrific scramble of refugees and western forces from Afghanistan published in the Sun on Saturday, July 27.

"Initially, I thought, I want to do a cartoon that’s funny,” he said.

“That’s what I’m here for: I’m trying to cheer people up, give people a laugh.”

He planned to draw two people on a transport plane talking to each other as they leave the country.

“It just kind of came: ‘No, it should be someone on the ground. A little girl.’ It just seemed to click and be what was the right thing to do.”

The result was a cartoon showing a transport plane flying away as a little girl on the ground waves goodbye while holding a teddy bear.
Without a single word, the cartoon captured the ominous feeling many people have about what victory by the Taliban means.

“If there is a tragedy or something really sad and I address that in my own clumsy way, sometimes the economy of words or no words at all ironically speaks volumes,” he said.

Harrop has been drawing cartoons so long, you could say that black ink runs in his veins.

Born in Liverpool in 1944, his family emigrated because of an aunt who was a war bride and sent them stories about how good life was in Canada.
At age seven, his family arrived in Egmont, near Earls Cove on the Sunshine Coast, then moved a short ferry ride away to Saltery Bay.

By age 14, Harrop had his first cartoons about daily life published in the Powell River News.

Two years later, he was working at the Vancouver Sun as a copy runner (someone who physically carried typed stories from one section of the newspaper to another).

It was a chance for Harrop to meet his cartooning idol, the legendary Len Norris, whose cartoons combined a light-hearted, satirical approach with an astute political awareness.
“This was almost the reason I came to work at the Vancouver Sun — because of Len Norris,” Harrop said.

He said Norris was “very gracious” to him.

“From time to time, he would show me certain things when he had his cartoon done. He was good that way.”

Not surprisingly, Norris was a cartoonist Harrop modelled his own work on.

For Harrop, the road wasn’t a straight one to a regular gig as a cartoonist on a daily newspaper.
Over the years, he made ends meet by working in a pulp and paper mill, driving a taxi, delivering pizza and selling cartoons to tourists in Stanley Park.

A big break came when he was hired by the Globe and Mail in 1989.
For about 20 years he wrote Backbench, which satirized politicians and government scandals as well as poked fun at cultural figures such as Leonard Cohen and Margaret Atwood. 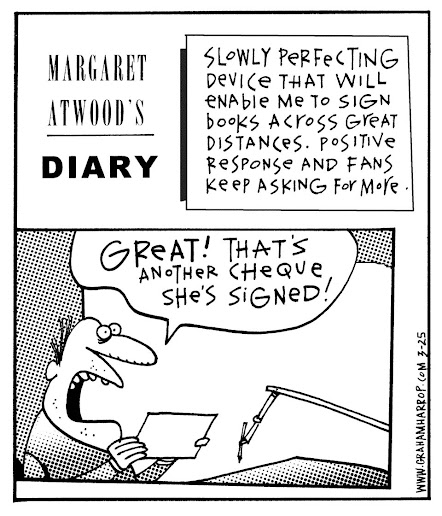 Since 1996, he has been regularly drawing cartoons for the Vancouver Sun.

Harrop gets ideas for cartoons from all over. They include reading the news, talking with people and writing ideas on scraps of paper, some of which he scribbles after waking up in the middle of the night.

“You try to address different subjects that would be of interest and not hammer on the same thing three days in a row.”

Harrop draws his newspaper cartoons with a pencil. He works at a standing desk with the drawing surface propped up by cushions in his one-bedroom condo/office in North Vancouver. 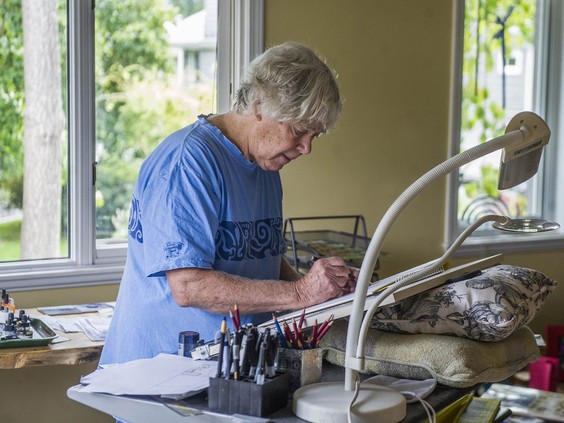 Once he has a version he’s satisfied with, it’s digitized and colourized. Then it’s sent by email to the paper.
Of his many cartoons, some haven’t always hit the mark.

He remembers one cartoon for Backbench where he drew Prime Minister Jean Chrétien saying ‘Dis’ and ‘Dat’ in his unique version of English.

“A senator took umbrage at my portrayal and wrote a scathing letter castigating me,” Harrop said.

One that he still regrets was about the unpopularity of Gordon Campbell, premier from 2001 to 2011. 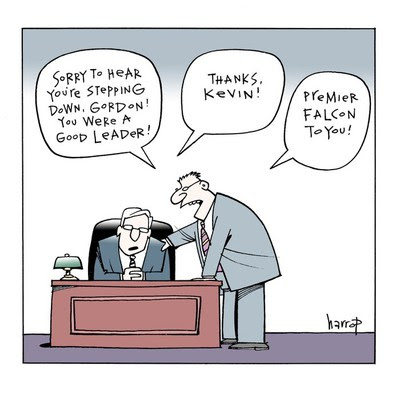 Even though he drew the cartoon years ago, Harrop was still visibly upset about it.

“It was clumsy and it was not handled well,” Harrop said.

“It didn’t reflect well on the man and I truly regretted that. It was meant to be humorous and in the cold light of day, it didn’t turn out to be that way.”

He said there have been a couple of times when he should have spent more time reflecting before starting to draw.

But once it’s done and sent to the paper, that’s it.

“You can’t go around to everyone’s doorstep to collect all the papers — I tried,” he said, making a joke.

“You need a really big wheelbarrow.”

Since Harrop started working as a cartoonist, the industry has changed dramatically.

In 1985, by one account, there were 30 to 35 full-time cartoonists working for newspapers across the country.
Now that’s down to about seven, according to figures kept by Guy Badeaux, who edited Portfolio: The Year’s Best Canadian Editorial Cartoons from 1985 to 2005.

He said syndication now means newspapers can save money by choosing from a daily list of cartoons submitted by freelancers.
The new system favours cartoons on national or international issues for the simple reason that cartoonists get paid more the greater number of papers in which a cartoon appears.

Badeaux writes cartoons under the pen name Bado for Le Droit in Ottawa and other French-language newspapers across the country.
Badeaux said Harrop is lucky he has a regular outlet for cartoons about local issues.

He said some cartoonists focus on caricature, others on politics, and some on humour.

“He’s very funny,” Badeaux said of Harrop from Gatineau, Que. “It’s easier to have a message if you make people laugh at the same time.”

Harrop said 25 years at the Vancouver Sun have gone by “in the blink of an eye.”

During that time, he was nominated for a National Newspaper Award in 2000 and 2006.

“What it means is gratitude, sincerely, for the job,” he said.

“I know what it means to turn down opportunities and this is one that I didn’t. It is a privilege.”
Published by Bado at 4:24 PM