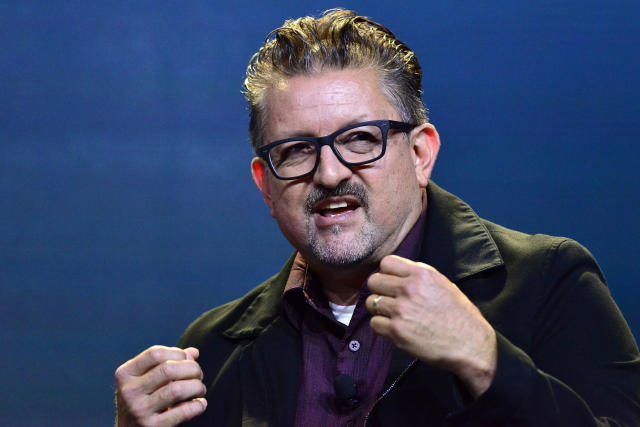 Like many prestigious awards that recognize great accomplishment in this country, the Herblock Prize for editorial cartooning, created in 2004 to commemorate the legacy of the late Washington Post cartoonist Herb Block, had never been offered to a nonwhite person—until this year.
While accepting the prize at the Library of Congress on the evening of April 27th, Lalo Alcaraz, a Chicano from San Diego, California, said what many of his friends and followers were posting on social media: “It’s about time.”
For the past thirty years, Alcaraz, who is also the first Latino political cartoonist to author a nationally syndicated comic strip, has used a caustic, take-no-prisoners humor against anti-immigrant and racist public figures.
“No other political cartoonist working in the U.S. brings as much passion, dedication and brilliance to the fight for fair immigration at the border and justice for the Latino community,” the Herblock judges stated.
In 2020 and 2021, Alcaraz had been a Pulitzer Prize finalist in the editorial-cartooning category, but, last year, in a decision that angered many cartoonists, the board chose not to declare a winner and has since eliminated that particular category.
The Herblock Prize, then, signalled a triumph for an artist beloved in the Latinx community but who, like the community itself, has long felt a lack of recognition from mainstream America.
Now he has finally been accepted. Or has he? “I get a lot of hate mail,” Alcaraz said in his acceptance speech.
A few days later, during a Zoom call from Los Angeles, he told me, “There is still this American societal attitude that we are foreign.”
He is not, in fact, foreign.
The child of immigrants who moved to this country from the Mexican states of Sinaloa and Zacatecas, Alcaraz was born in 1964 in San Diego, a city, he told me, that was “in denial that it was on the U.S.-Mexico border.”
He grew up witnessing and experiencing discrimination and racism—from cops pulling him over for no reason, when he rode his bike as a kid, to “shoplifting police,” following him and his mother in stores, to a large outdoor swap meet that ended with Border Patrol cars and helicopters chasing a group of undocumented immigrants as a crowd of horrified Mexican Americans watched.
These experiences, he said, put “the politics of the border in front of my eyes.”
Published by Bado at 12:00 AM