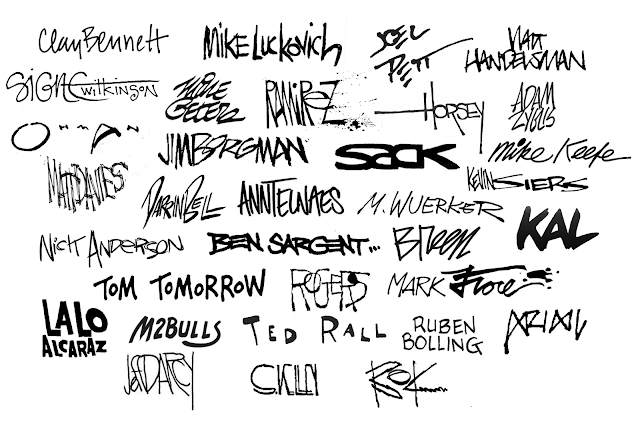 Ten days after the 2022 Pulitzer Prizes were announced, 33 cartoonists who have won or been finalists for the award signed an unprecedented open letter to the Pulitzer Board about recent changes to the prize.

After quietly expanding the parameters of the Editorial Cartoonist category in 2020 to include illustrators and graphic reporters, the Board that presides over the judging process for journalism’s biggest award renamed the category “Illustrated Reporting and Commentary” at the end of last year.

This unannounced move came months after the Pulitzer Committee refused to pick a winner among the three qualified finalists in 2021, and 99 years after the Editorial Cartoonist” category was created.

Last week the AAEC sent a letter to the Pulitzer Board petitioning the restoration of the award, and now almost three dozen recipients of the Prize are collectively seeking the same thing. Here is their letter in its entirety.

A letter to the Pulitzer Board from past Pulitzer prize-winners and finalists in the editorial cartooning category:

We are dismayed to see the Editorial Cartooning category removed from the annual conferring of Pulitzer Prizes.

From America’s inception, the editorial cartoon has crystallized our messy political struggle. Iconic historic images — like Benjamin Franklin’s “Join or Die” woodcut, Thomas Nast’s plutocrat with a money bag head, and Herblock’s cartoon coining the term “McCarthyism” — all sprung from the minds of individual cartoonists drawing visceral, emotional, and urgent opinions, in response to the news events of their day.

The greatest American editorial cartoons draw on every inch of the First Amendment to, as John Stuart Mill wrote in On Liberty, “push arguments to their logical limits.”

For 100 years the distinguished Pulitzer Prize has walked hand-in-hand with the idiosyncratic editorial cartoonist, elevating the gritty public artform by (almost) annually bestowing its revered prize upon the “best” of the craft.

This partnership has allowed publishers with intestinal fortitude to keep a seat for the local cartoonist on the newspaper Editorial Board, justifying their employment with the weight of the award. This has, without a doubt, nurtured the vitality of the medium and helped our nation weather its political discourse for the better.

While the landscape of print journalism has changed, and far fewer practitioners of the form are employees of newspapers, those newspapers still print scores of editorial cartoons every day. Added to that, there are now more editorial cartoonists than ever reaching their audiences directly via the digital screen.

Our numbers are more stylistically, ethnically, and gender diverse. The conferring of a cartooning Pulitzer Prize continues to be a powerful affirmation of support, even more valuable for artists vying in today’s raucous public discourse.

So, it is with alarm that we see the Editorial Cartoon prize morph into a nebulous award for “Visual Reporting and Commentary.” In Journalism, reporting always emanated from a newsroom, and commentary from the very deliberately walled-off editorial opinion factory.

This American tradition should not be watered down and as we witness our country’s intensifying political divide, it feels like a dangerous moment to abandon us dagger-penned town criers.

We fully understand the need to acknowledge and elevate important new forms of journalism, including powerful visual storytelling, like the ones you honored in 2022, 2018, and in 1992 when the Pulitzer Committee bestowed a Special Citation on Art Spiegelman’s Maus.

But because these formats employ drawn visuals doesn’t mean they are the same as an editorial cartoon. Readers of the news have always treasured the quick and rude interlude offered by the ink-spattered rectangles nestled within the ocean of important words.

And lest we forget, cartoonists draw our arguments using satire, a scarce commodity in journalism, but one that helps stick a message instantaneously and memorably in ways even the finest writing cannot.

We mock the powerful, reduce tyrants to sniveling caricatures and twist demagogues’ own words against them. A serious illustrated reporting piece serves a notably different purpose.

As grateful beneficiaries of the Pulitzer’s gravitas, we agree with the Association of American Editorial Cartoonists’ plea to restore the original Editorial Cartooning prize while also — as is done for multiple writing and photography categories — retaining the new prize created for Illustrated Reporting.

In 1922, the first Pulitzer Prize for cartooning was awarded to Rollin Kirby for The March To Moscow.

In 2022, We The Cartoonists hope to continue our march with the Pulitzer Prizes still at our side, with categories honoring all, fittingly.

The NCS response to the controversy:

Since 1946, the National Cartoonists Society has existed to advance the ideals and standards of professional cartooning in its many forms. To this end, the NCS board of directors hopes you will consider the following request.

As an organization representing cartoonists, we are deeply concerned about the decision to retire the “Editorial Cartooning” category for the Pulitzer prizes.

We appreciate that the Pulitzers are expanding the types of cartooning and art that are award-worthy. We have done the same with our own awards.

However, just as “News Photography” and “Feature Photography” are different, “Illustrated Reporting and Commentary” and “Editorial Cartooning” are two distinct genres of work and should be separate categories.

We ask that the Pulitzer Board officially retain “Editorial Cartooning” as its own category in addition to recognizing the category of “Illustrated Reporting and Commentary.”

The skillset of each form of cartooning is distinct: illustrated stories select a topic and are produced over an extended period of time, requiring a level of cohesion, research, and development unique to this craft.

Editorial cartooning demands an immediate interpretation and reaction to events in real-time, necessitating an ongoing awareness of complex and often unpredictable contexts. At a time when news cycles are smaller and smaller, this skill has become even more crucial.

Combining editorial cartooning and illustrated reportage together into one category does a disservice to both genres. To us, the situation is like having a sprinter and a long-distance runner competing for a single gold medal because they’re both track and field athletes.

We do not want to undermine the importance and skill of graphic reporting, comics journalism, or long-form reportage, nor take anything away from that category’s deserving winners and nominees.

We believe both skillsets deserve to be recognized.

The NCS urges the Pulitzer board to adopt this change or consider opening the discussion with us to explore further.

The Board of Directors
National Cartoonists Society (Est 1946)