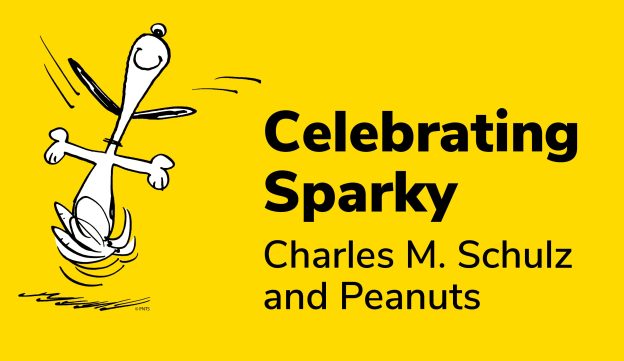 Celebrating Sparky: Charles M. Schulz and Peanuts, an exhibition curated by Lucy Shelton Caswell, honors Schulz’s work and marks the centennial of his birth.
Charles M. Schulz, known as Sparky to his family and friends, single-handedly created 17,897 Peanuts comic strips during a span of almost fifty years.
At the time of Schulz's retirement in 1999, his creation ran in more than 26,000 newspapers, and was translated into 21 languages in 75 countries with an estimated daily readership of 355 million.
Peanuts became a worldwide cultural phenomenon in the second half of the twentieth century. Its impact can be seen on everything from space travel and classical music to the Broadway stage, merchandising, and even the English language.
Schulz’s own words guide visitors to explore the themes of friendship, connectedness, unrequited love, and insecurity that made the strip resonate with so many fans.
Twelve "devices" that Schulz believed made his comic strip unique are featured:
Celebrating Sparky is curated by Lucy Shelton Caswell, and mounted in partnership with the Charles M. Schulz Museum and Research Center (CMSM).
Original Peanuts art and Schulz-related materials from BICLM will be shown.
High resolution reproductions of original Peanuts comic strips, photographs and archival material as well as Schulz tribute cartoons owned by CMSM will be included.